“I wish I wasn’t leading, leading brings with it lots of pressure,” stated Pelham, Alabama’s Bain-Moore. “With this tournament to go, the first goal for all of us girls is still to make it to the championship.”

“I’m going to go for it though…I do not want to lay awake at night wondering,” Bain-Moore concluded.

Bainbridge, Georgia resident Pam Martin-Wells lies in second a mere 10 points behind the front runner and feels her winning the AOY race is possible … if … everything falls into place, the fish co-operate, her competitors falter, and … if … she makes no mistakes.

“There are too many variables that I cannot control such as what the competitors catch or don’t catch, the water and weather conditions, and what the fish do,” Martin-Wells stated.  “I can only worry about me and try to control my situation and make as few mistakes and make good decisions on the water.  I think it would be neat to win AOY in the LBAA.”

Murchison, Texas resident Pam Ridgle sits third in the LBAA AOY race and leads the 2011 LBAA Rookie of the Year standings.  “Well it looks like if I just show up I will wrap up Rookie of the Year.  The only way I could be beat if I did not catch a fish and the rookie behind me got first,” Ridgle stated.

Ridgle went on to say, “Making up lost ground (in the AOY race) may be a little tougher. But I always go in thinking I can win first, and if I do, depending on how the two ahead of me do could put me in that AOY.”

Sitting in fourth is local pro Emily Shaffer.  Shaffer a Mt. Juliet resident said, “I’m happy to be in the running for Angler-of-the-Year. I’m blessed to be able to make fishing my career and working behind the scenes gives me a feeling I’m giving   back. Seeing the younger generation come on board and fish with us is awesome.”

On the co-angler side third place, Vicki Henderson of Ashdown, Arkansas says her 2011 year with the LBAA has been a bittersweet one.  “More than a few “shoulda, coulda, woulda’s” have gone through my mind.  That is true for everyone, though, so I am trying not to let that cloud my focus. There is probably more stress on 1st & 2nd place than on me.”

Henderson went on to say, “I’ll have to take care of my business & do really well.  That is basically, what I focus on for each tournament. Catch as big a limit as possible & see what happens.”

“Unfortunately, that alone will not be enough to overtake anyone.  It is attainable, but crazy things will have to happen. You’ll definitely need an umbrella if I do, `cause pigs will be flying,” Henderson stated with a laugh. 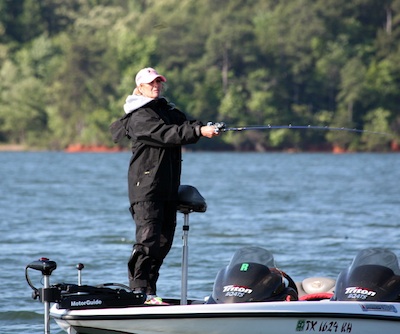 Tournament dates and times for this week’s 2011 LBAA Old Hickory events are as follows.  The ProAm Tournament will be Thursday, August 24 and Friday, the 25th.  Anglers in the pro division may bring five legal bass and the co-anglers three legal fish to the scales per day during this tournament.  Entrants into the Old Hickory ProAm event must be LBAA members.

On Saturday, August 26th, the LBAA will host the 2011 LBAA Old Hickory Homesafe Charity Tournament.  The proceeds from this charity team tournament will go towards helping Homesafe assist more women and children who find themselves in difficult situations.  Entry fee is $100 per team and the tournament will pay out a guaranteed $1,000 first place cash prize.  There will be an additional $200 cash prize going to the highest finishing team with a  female team member and an additional $200 cash prize that will to the highest finishing team with a child age 12 or under as a team member.  At the conclusion of Saturday’s weigh-in, there will also be a raffle of items donated by national and local organizations.  The proceeds of this raffle will add more support to the Homesafe organization.  Visit them on the World Wide Web at http://homesafetn.org/services/sumner-county