The Little Gal has enjoyed raising livestock for the past few years. She is in 4-H and has done quite well with her pigs over the years. From the start she has always wanted to raise lambs. In the past she has borrowed and paid Mom and Dad back. This year, she bought her animals with her own money, which she earned from prior year’s sales. She bought herself a couple of pigs and then decided she was up for the challenge of raising sheep.

Raising sheep requires quite a bit more work than pigs.  The Little Gal realized this with shock at weigh-in a couple weeks ago. Just two weeks before fair and both lambs were over the weight limit.  Do you know what that meant?

It not only meant a diet, but also, it meant exercise!

The Little Gal had been strolling her sheep every day but now it was time for some hard-core training.

HEY! Guess what? Hunting season was only weeks away as well. That also meant hard-core training for the huntresses of the household. The Little Gal thought this was “perfect.” We can get Mom in shape and get the sheep in shape. She asked Mom for help.

Mom wasn’t too thrilled about the sheep. She gave it some thought and then stepped up to the plate to train with the Little Gal. They trained twice a day. The two prepared themselves and headed out at the crack of dawn and again after work. They ran their … or actually, Mom’s & the sheeps’ chubby butts up and down the north pasture. It was a sight to behold! The Little Gal and Mom trying to drag the sheep up the sloped pasture and then trying to keep up with the lambs as they raced back down. What training! 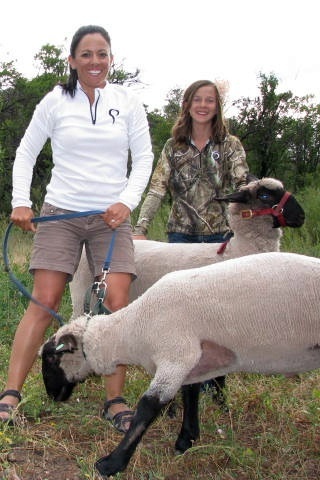 The horses and mules would stop and stare. Mom and the Little Gal and would tug and pull the sheep up the slope. When they reached the end, they would turn around and the sheep would lunge, jump and run as fast as they could back down to their home. The horses tried to figure out “what the heck and why.”  Mom and the Little Gal would hold on tight and run as fast as their legs would go. Occasionally, you’d hear shrieks as one of the two would yell to a mule, “Look out!” as it stood in amazement and watched the white blur go by with a little girl holding tight behind.

To read more adventures of the Little Gal (and her mom, of course) check out Mia Anstine’s blog. 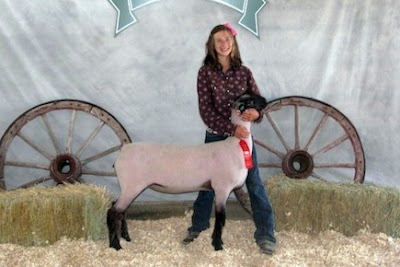 The Little Gal and her prize-winning sheep. They're both in great shape now! Photo by Mia Anstine.