One thing I love to mention about shooting, when people ask about the sport, is when there are women shooters there is an immediate bond. And as great as it is to be part of this “sisterhood,” there also is something more — the legacy this sisterhood upholds that dates back to the first gun ever fired by a woman.

Lucky for me, my generation has grown up with incredible female shooters and role models who are acknowledged and praised for their talents and strengths. Female shooters have made their presence known. 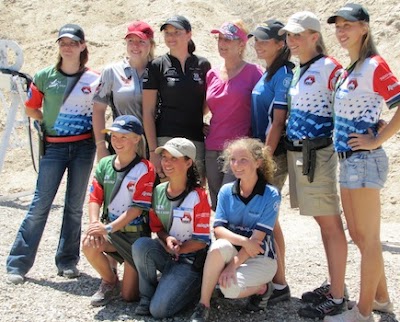 We girls stick together in this sport! It’s an instant friendship because of the major similarity – a sisterhood. This was very apparent at the MGM Junior Camp in Idaho this summer. The girls at the camp traveled from all over the US to participate. With about 60 shooters (with only eight girls), we were kind of outnumbered. But we had our advantages … the inspiration of the wonderful woman who organized the camp and the woman coach! 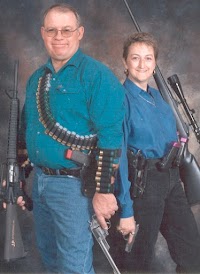 Both women, the organizer and the coach, came with interesting and inspirational backgrounds. Rhonda Gibson, the woman who organized the event, was shooting when women were even scarcer in the sport! And it wasn’t just her shooting out there either; she took her daughters, age 13 and 15 at the time. Some of the men tended to look down on them at first: “After all, what were three little ladies doing at a gun range? Well, shooting, and having a darn good time doing it!”

The men who seemed to disapprove were won over pretty fast though! “Now, my girls and I were not easily ignored, we were there to stay and we decided that we would be just so nice and friendly that they couldn’t ignore us for long,” Rhonda said.

I like to think of Rhonda as a sort of pioneer of the shooting family. She was and remains a range mother; I adore that dedication and love for the sport. She and her husband, Michael, are the founders of the MGM Junior Shooter Camp. Together they own MGM targets; early on their plan was for every target sold, three cents would go to the junior shooters. At first they gave the money to USPSA, but then wanted a more “hands-on” approach with the juniors. “One year at the SHOT Show, Sgt. Aaron Hampton of the USAMU (United States Army Marksmanship Unit) came to our booth and told Mike he had an idea for a junior camp but needed some help,” Rhonda recalled. That was the answer to their dilemma. A junior camp! From there, the camp has grown and moved from Georgia to Idaho. 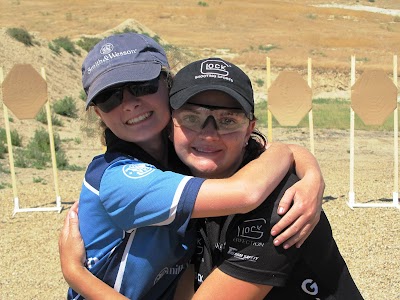 The female coach was Randi. Sound familiar? Yes, the World Champion, intelligent, strong, independent, and female role model – Randi Rogers! When I found out she was coaching at the camp I was so excited that she would be there, I could hardly keep my feet on the ground! She taught us some fabulous tips about reloads (mostly for semi-autos, but she took time out to give some help to the girl revolver shooter!). We all left her stage feeling so confident! We knew we were getting better.

Randi, like Rhonda, had an interesting start in the sport. She shot Cowboy Action with her grandpa, and at 15 she became a Junior Champion. But, like most, she didn’t start off winning. At her first match she didn’t place very well. She placed last in the junior category. (That sounds kind of familiar! Yep, we have something else in common. Of course, that would never stop her!) She said, “I got back up and I went to the World Championships in April and I won the Junior Girls’ World Championship title.” She’s a major inspiration for junior girls AND boys. Randi is one of the nicest people I’ve ever met and one of the best shooters I’ve ever seen! She has brought about a huge breakthrough for girls starting in competitive shooting, and I know they look up to her as being like them. As sweet as she is, she has overcome the barriers that have so frequently held women back. And she is just amazing to watch shoot and continually win.

It’s women like Rhonda and Randi who paved the road for my generation. They have built the foundation for range families. Not only are they major inspirations, but they also are among a legacy of women of dedicated, talented, and skilled shooters. They are part of the sisterhood! 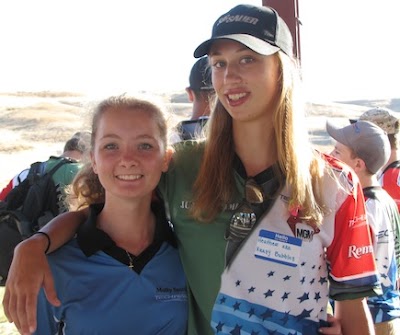 Range women: some of the sweetest, strongest, most inspirational people you will ever meet. I have such admiration for my “sisters” of all ages, for they are participating in carrying on the legacy. Rhonda and Randi are two women I aspire to be like! Both independently taking different routes in the competitive shooting world but traveling one road, they are part of the legacy of women in the shooting sports.