Babbs in the Woods: Mashing the taters, a ‘spud’tacular experience

So, I stopped in at the Southeastern Outdoor Press Association‘s conference, to catch up with some folks and shoot some guns recently. The afternoon of shooting, hosted by the fabulous Ozark Shooters Sports Complex in Walnut Shade (just down the road from Evening Shade, really), also held another activity: a spudgun shoot to raise funds for the organization.

I’ve heard my sons talk about shooting spudguns; in fact, I used to act as range safety officer off our back deck for them (See photo below). Frat Boy brought home a spudgun once that he built and let Baby Boy shoot it off the deck into the woods of Possum Holler, behind our place. That's Baby Boy in front. He's in the Army now (Combat Engineers ... hmmm). And Frat Boy behind him. He's a mechanical engineer, dealing in barricades and such ... double hmmm. Maybe the training on our deck served a purpose. Homemade spud gun. Photo by Barbara Baird.

But, I had never shot a spudgun, till this day. Mark McDowell, Head Spud Stuffer and Hair Sprayer, ran the show. You paid five dollars for two tater tries. You shot at a box located about, oh, 25 yards downrange. 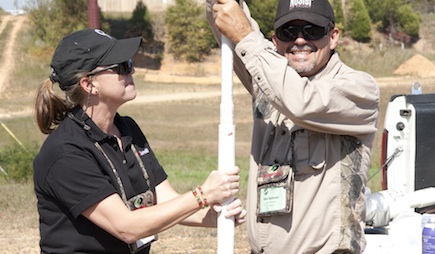 Tapping the taters. Mark McDowell brought some frozen little reds to use as ammo for the fundraiser. Here's Babbs holding the weapon as Mark loads it up for her shot. Photo by Jason Baird.

Tater ammo has no set course after leaving the barrel. It can go right, go left, go up, go down. 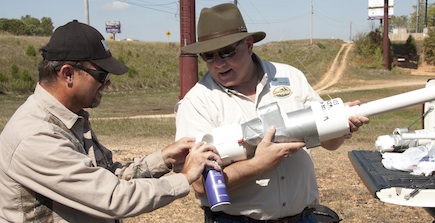 Mark McDowell adds the propellant to the tater gun for Mark Thomas. We wonder ... did it have extra body or hold? Photo by Jason Baird.

The closest I witnessed anyone get a piece of potato close to the cardboard target box was Mark Thomas, of the National Shooting Sports Foundation. He said he’d never shot a tater at anything, either. 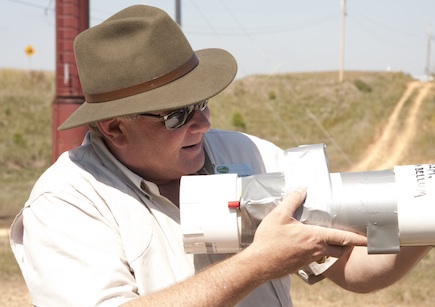 Mark Thomas, National Shooting Sports Foundation's managing director, marketing and communications, lined up the site (?) for his turn at the tater line. The shoot was held to raise funds for the Southeastern Outdoor Press Association at its annual conference, held this year in Branson, Mo. Photo by Jason Baird.

The spudgun, aka spudzooka, operates on air pressure and a propellant (such as hairspray) to launch the spud downrange. 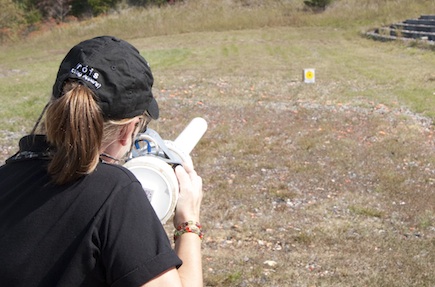 Ready, aim, fire ... and it shot just to the left center of the target. Photo by Jason Baird.

I think most folks just build their own contraptions out of PVC. However, there is a Spudgun Technology Center online, the Internet’s “premiere website” for these types of devices. The “Stimulator” is on special, for $45. 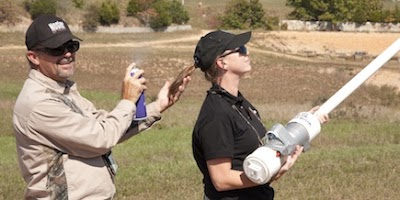