Deb West and The Pink Whistle Society: The ‘pinking’ of the retriever world

It wasn’t long ago that it would be an odd sight to see a waterfowl hunter, gun dog handler, or hunt test handler wearing pink, but thanks to Deb West of Waterloo, Ill., those days are rapidly disappearing. West, who also owns Brownwaterdogs, is the founder and mastermind behind a group called The Pink Whistle Society.

Many of my friends and readers have often heard my wailing and moaning about all of the pink outdoor products aimed at women, the pink washing of America during October, and my disdain for them, but this is one pink product that I am proud to wear, support and stand behind! The Pink Whistle Society made its debut in the fall of 2009 at a lady handler seminar held by WISLL HRC (Hunting Retriever Club) in Wisconsin where West was participating as trainer.  It started out just as a gift from West to be included in the lady handlers’ welcome bags. A symbol of support, if you will, of the community spirit found in women gun dog handlers.

West told me, “I thought it would be neat to give all the women a pink whistle in their handler bags.  So it grew from there.  I thought it needed a Facebook page, so I created that.  Then I thought how neat it would be to have pink lanyards and leads … so I looked and found a maker, then we needed pink calls … so, it took some doing but we got some awesome ones for the set. Sadly, those first calls turned out to be  cost prohibitive, so I kept searching, and a friend from St. Louis took the idea to Buck Gardner and he makes them for us now at a most reasonable price.

Then we needed a logo … Action Graphics did the artwork for that.  Once we had that, Action Graphics also jumped on board to make a variety of logo products for us.  So now we have a really great little lanyard, lead, whistle, call set; and we also have many great logo items to help support our cause.  As it continued to grow, we needed a website, so that was added. You could easily say we are constantly evolving and adding to our lineup based on member suggestions and ideas.“

The Pink Whistle Society Set is a great, functional, and stylish set for gun dog handlers that contains a lead, custom leg band, lanyard, a pink whistle and pink call.  These aren’t just pretty – all the items are fully functional and work well during training, handling, and the rigors associated with owning a good gun dog.  West shared that Buck Gardner has been great to work with on this project, and the calls from him for this set sound as fantastic as they look. The Pink Whistle Society and the popularity of the lanyard and lead sets is growing exponentially in the retriever and waterfowling community. Those who purchase the sets (lead, lanyard, whistle, call, and band),  which retail for a total of $70 ($65 plus $5 shipping and handling) have the added bonus of knowing that proceeds from the sales are split between the HRC Foundation and The Susan G. Komen Foundation.

Through the miracles of word-of-mouth and social media marketing, West has seen phenomenal growth, not only in the sales of the “Society Sets,” but also in the popularity of the Pink Whistle Society as a group that provides a place for lady gun dog owners and handlers to hang out, share experiences and frustrations, support each other, and celebrate the women who are active in the outdoors, waterfowling and gun dog handling. 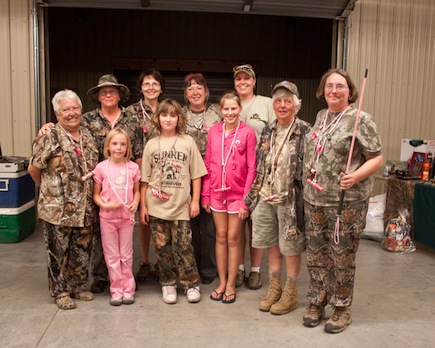 “It has crossed all boundaries.” Said Deb West, “I know the logo and the beautiful print that Debbie Stonebraker does annually for us have HRC on them, but I have sold many to AKC club members, NAHRA and other gun dog group members as well.  Cancer and cancer survivors don’t care what your club affiliation, favorite dog breed, or gun dog activity is; they know what it stands for and where the money goes, so it has grown farther than I ever imagined. “

Photo courtesy of Ed Wojciechowski, taken at the 2011 Master Nationals.

When asked how the men in the retriever and hunt test community accepted the pink invasion, West shared that many men were buying the sets as gifts for the women in their lives who participate side by side with them in hunting and hunt test activities.  With pride, West recalled that renowned dog handlers and trainers Chris Akin and  J. Paul Jackson, of Drake’s Migration Nation, have been sporting their pink whistles at national retriever events. The number of men who happily wear them on the line at hunt tests is rapidly growing.  Men are beginning to realize that issue of breast cancer is not just a woman’s issue. It happens to the women they love most, their mothers, wives, sisters, daughters and friends.

Said Jason Schlesinger, avid waterfowler and Field Staff for Buck Gardner Game Calls, Dakota Decoys and Pro Staff for Edge, “My mom is a three time breast cancer survivor. You bet I am happy to support the Pink Whistle Society and wear the pink on the line and in the duck blind. Real men can wear pink, and we do! I can tell you that any woman who faces and fights a breast cancer diagnosis is far stronger than we big, tough, he-men like to think we are. ”

“It is hard to describe the feeling of walking FROM the line at the Master National. The emotion of being there and getting to the final series. As Taz and I walked to the truck after running the last series, he was on the pink lead. I held the pink whistle in my hand and as we walked, [I] thanked God for all he has did for me and prayed for all those suffering with breast cancer. Missy’s fight is over, but many of our friends and love ones will face the fight. The PWS was there for me with you folks’ encouragement and caring. … I Love you all and may God bless and keep you safe. My new life begins.” 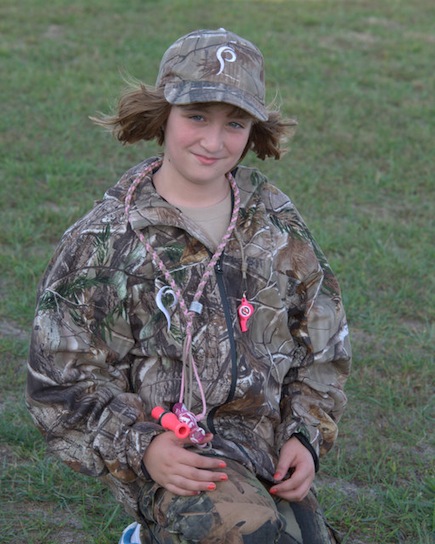 Madison King -- one of the PWS's most active and youngest members. Note the pink nail polish! Photo by Gretchen Steele.

Hunt tests are notorious for being very specific regarding the attire that can be worn on the line. I had to wonder if any of the handlers wearing the pink had ever encountered a problem from a line judge who requested that they remove the pink call, whistle, lanyard etc.  When I asked West, who is also an accomplished hunt test judge herself, about this as a potential problem, she happily replied: “At the National HRC meeting in Memphis I presented this to the Executive Committee, and was ask to present it at the General meeting.  It was a great hit.  The PR committee was all abuzz about it.  The Field Reps said they thought it was great!  There was absolutely no talk about it being any problem at the line.  Although I would presume that would be up to the individual judges at each hunt test.  But once people are informed about what it stands for, I don’t fear any problems.  One woman just told her judge she was a breast cancer survivor – end  of discussion.  I don’t foresee any problems.  If there are, it will up to individuals to really handle it the way they see fit, and there are ways to do that most constructively.  I think mainly the guys need to know the symbolism! “

Having been along for the ride with Deb West from the early days of just the pink whistle to the current status of the ever growing Pink Whistle Society, it has been remarkable the sheer number of people who have stood to support the cause and the number who have come together to support each other, whether it be during a fight with breast cancer, sharing memories of loved one who has battled breast cancer, help with training and handling a gun dog, support of  each other during hunt testing and field trials – the Pink Whistle Society and its members are there in force.

Because in this case, there truly is POWER IN THE PINK!

Try to keep up with outdoor writer/photographer Gretchen Steele (if you can) at her blog called Walkin’ with the Wild Woman!