Gear Court: Traci Schauf and ‘sweet dreams are made of these’ … Nemo Fillo Pillow

I just had an opportunity to try out an inflatable camping pillow at no cost, courtesy of Backwoods. I’ve never used a pillow when camping before, instead resorting to stuffing any loose clothing I could find into the hood of my sleeping bag and calling that a pillow.

The Fillo Pillow by Nemo has a soft, removable microsuede cover that is machine washable. That’s important when you’ve been backpacking in bear country and haven’t seen soap or deodorant for six days. When I tested this piece of equipment, it was 48 degrees, and I was amazed at how warm it kept my ear and head. (That was a bonus to someone who can’t put her head inside her bag because of claustrophobia issues.)

The pillow, with its cushy memory foam layer, starts out one-inch thick, and inflates to 4 inches. Memory foam. Now that’s a luxury on the trail. If you want an even fatter pillow, thread some clothing through the cording on the back.

I really like the valve system, which locked completely, allowing no leaks, and was easy to unlock and deflate. The cover also acts as a stuff sack, which worked great to roll the pillow and stuff into the cover, but after stuffing, rolling and folding the pillow to fit it into my backpack, I found the best way to carry it was just to slide it in it flat against the back of my pack and fill in around it.

The pillow weighs 10.9 ounces, which for ultralight hikers might be too much heft, but for a few days packing, I think I would add this to the gear pile, if I have the room. Hubby liked it so well he said other things would get cut before the pillow did. I KNOW it makes the cut for car camping. 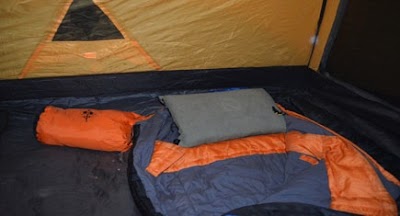 Note: It also worked great as a lumbar support when my husband got lost and we ended up driving for 12 hours.

Backwoods retails the Nemo Fillo Pillow for $39.95. I would say this pillow definitely has fluffed up my gear list for camping! 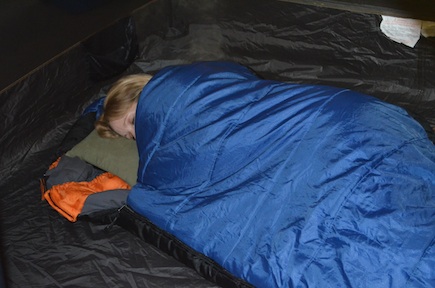 Sweet dreams are made of these ...

Check out the Nemo Fillow Pillow at Backwoods.