~Warning: The following photos might be offensive to those who do not realize that animals come to harm naturally, too.

Fall 2011—I am sitting home with my husband enjoying a quiet day, when my phone rings.  On the other end of the line is a friend who is on a once-in-a-lifetime vacation in Alaska with his family. He is excited and a little frustrated as he explains to me the scene before him, that he is trying to capture on film (or digital, as the case may be). He wants to take a photo of the entire view with the flowers in the foreground and the snow-capped peaks in the distance. I ask him what kind of camera he is using and try to keep my instructions as simple as possible.

I tell him first to try the scene mode on his camera. (The one that looks like a mountain.) That doesn’t work. So, I tell him he needs to switch his settings to Aperture priority … and this, I believe, is where I lost him, because this is where my brain also used to shut down. I had myself convinced it was too complicated and I wasn’t going to understand.  So I would switch my settings back over to the tried-and-true, the comfort zone, and hope that I could capture the images I was after.

That works most of the time, the “comfort zone.” But, on that rare occasion – you know, those rare occasions – as the sun sets behind a snow-capped mountain, when flowers spread in a carpet of beauty on a mountainside you have never seen, and may never visit again.

When the groom kisses the bride.

When a grandparent sees her grandbaby for the first time.

When your child stops just before entering the school doors on his first day of school and turns to smile and wave at you.

When your son or daughter holds up the arrow from the first animal they harvested.

I think you get the point.

Moments like these you can’t recreate. These little moments, you only have one chance before it slips away.

We have all seen and laughed at the posts people are sharing of smart phone spell check disasters. Well your digital camera is just another tool and though it might get things right most of the time, it still is only an electronic device trying to guess what you are seeing. You have a digital camera, fully capable of capturing those moments. So why not learn how to use it for its full potential.

Look up “aperture priority” and if you are anything like me, your brain will shut down by the third line and all the words will start running together.  I made it past “mode dial,” but, got sidetracked trying to get a realistic grasp on what  the word “aperture” meant.

Aperture – the opening that light travels through in optics. This is where I was always lost. The larger the number, the smaller the opening (letting in less light) blah, blah, blah … Confusing? Yes!  So let me explain it to you the way I wish someone had explained it to me – simple and to-the-point.

AV or A (Aperture Priority) is used when you want to control the depth of field or in simpler terms, how much of the photo is in focus. Do you want the whole WIDE BIG scene to be in focus from front to back? Then dial the number up (big#= more focus). Do you want something in the foreground to stand out and make what is behind it (strangers on the street – or other distracting objects) to blur and disappear (smaller #= less focus)? Yes there are a dozen other things to factor in here, like the time of day and lighting conditions, etc., and so forth (and once again I can hear your brains shutting down) so for now … we are not even going to worry about them.

But, I do want you to keep one more tip in mind. The more you want in focus, the steadier you will want your camera to be.  Remember, smaller aperture/ bigger# means the camera will automatically select a slower shutter speed and slower shutter speeds mean that any movement, either by you or the subject, will be caught in the photo as well. Simply, if you want something in focus, put your camera on a sturdy surface or invest in a tripod.

Looking at the words on paper is all fine and dandy, but when, exactly, do you actually take the chance to switch the camera off auto and try these modes?

Well, the answer is … today. You won’t see the changes in your view finder, but with a little practice, your confidence will grow and you will know when it is safe to be more creative with your photos, and capture some great images (aka, memories) in the process.

So, this today or this week – starting here and now … I challenge anyone with a digital camera  to “broaden your horizons” Put your camera on Aperture Priority  (“AV” on a Canon and “A” on a Nikon) for one week. Play with the aperture (f-number) and see what kind of results you get. What do you have to lose?  It’s a digital camera, with the ultra handy delete feature, after all.

And now … an example of payback

A walk on the river.  I took my camera to the river with me. I switched the dial over to AV, took a deep breath and went out looking for something to take a photo of that would show the difference between a small aperture (bigger # – more in focus) and a large aperture (smaller # – less focus, but drawing attention to the subject).

I saw ducks floating on the open water, then, photographed a lone feather caught in a piece of brush hanging over the edge of the bank. I was scolded by a pair of Kingfishers for intruding on their home and hunting grounds. I snuck past a bedded whitetail doe, and followed the tracks of numerous creatures along the river’s edge.

I listened to the ice talk as the temperature between the water below and the air above changed with the setting sun. I was searching for a photo, but I had also come here in search of shed antlers. As the sun began to sink, and the time before I needed to return home ran short, I spotted a lone antler sticking up from the ice in the middle of the river.

Excitement welled inside me as I hurried from boulder to boulder in an attempt to retrieve the fallen antler. I stepped out on a patch of ice and heard it crack below my boot. Stepping back to secure footing, I stopped for a moment to re-evaluate the situation and find a safer, more stable path to my intended treasure. It was only then that I recognized the remainder of the deer. I sat down on a large boulder at the edge of the thin ice and said a prayer for the fallen warrior, for our paths had crossed many times on the other side of this river during hunting season. For two months last fall, he and I had danced the silent dance of hunter and hunted.

The ice along the river’s edge groans again and the geese upstream speak to each other, bringing me back to this place. I pick up the camera from my lap, deftly switch it on and double check that it is still set on AV. I turn the dial and watch the number get larger. I brace the camera on my knee and snap a few photos of this buck’s final resting place, encased in ice in the middle of this cold and rushing river. 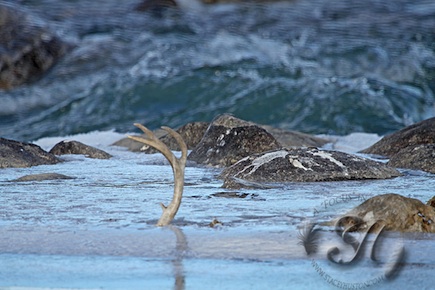 I turn the dial on my camera in the other direction and watch as the f number gets smaller – around me the light fades – yet, I am still able to capture the moment, fading out the business of the river in the background and keeping what I hope is an almost peaceful scene. I cannot fathom the events that brought him here, but I am grateful that I did not have to witness them. 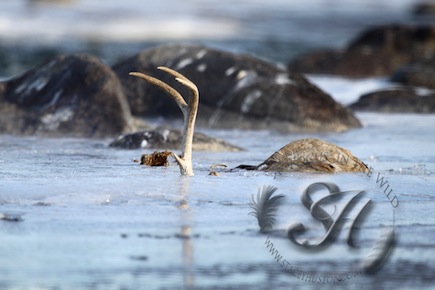 As I make the walk back to my truck, I think about the unfairness of nature. I ended my hunting season with an empty tag, but with confidence that this buck would live to pass his genes to future generations. Well, he survived the rut, and I am sure that in a few months I will be happily photographing his young along this same stretch of river. The circle of life once again completed.

But still, I am saddened by his death. He will not be easily forgotten, and he will not go to waste. This day I have witnessed several sets of coyote tracks, bobcat, and skunk as well as those of other meat-eating creatures. Yet, the circumstances of his death leave me feeling unsettled. I am not sure if it is because of the cold and the ice, or the fact that he was alone. Probably just because I am human. And, since no one knows where I am this day, I chose my steps a little more careful and avoided the thin ice as I hurried to return home to my family.

Please visit Stacey Huston’s website, A Focus in the Wild, to learn more, enjoy nature and get inspired.