Hey, Bachelor! Get some wading belts on those women

Note to Bachelor Ben Flajnik. If you’re going to take a bunch of novice fly fishers out to Park City, Utah, to fish on a group date, make sure you get them the proper fishing attire. Including wading belts.

I don’t get cable TV. I decided that was one thing we could live without a year ago and frankly, that decision freed me to read more books and uh, to set up Timeline on my Facebook page. But, occasionally, something from modern culture and TV news floats across my view in Google Alerts and this one piqued my interest. I checked out the fly-fishing date that the current Bachelor took with the women he’s courting in the popular reality TV show on ABC.

What jumped out at me, like a mad brown who missed another midge hatch, was the lack of wading belts on any of the cast in the river. At least in the photograph I saw online they weren’t wearing belts. Now, granted … they were standing in ankle-deep water and it looks like they’re holding adult beverages in the stream. So, strike two. I watched a snippet or two of the show online and saw no belts anywhere. Why? Let’s let Orvis give us the run-down on why we should never enter a stream in waders without our belts on … and guess what? It’s not because the belt keeps the water inside your waders from dragging you down. According to Dan Gracia, over at Orvis:

Also, I checked the show online, and gasp, there they were … paddling a canoe. With no PFDs on their bodies. Add this to the list. Hey, ABC, call me. I am available for consult, and I’m a mom of four kids that I took to the river — safely. 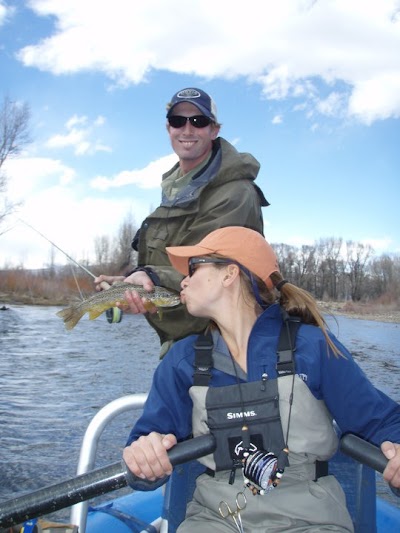 Katherine Grand, the real deal on the water, Damselfly Fisher here at The WON, always wears her special waders with a belt. She's a guide in Colorado. Guess she knows what to do. And, that's her new hubby, Eric, holding the fish! Submitted photo