Charmed by a new pair of snakeboots by Redhead

Getting new gear for Christmas is about the perfect way to celebrate a holiday, in my opinion. This year it was snakeboots from my husband. My colleagues at my non-outdoor job were less than impressed when I shared that information with them.

“Ooooh,” they squealed in unison. “Uggs?  Stilettos?  Furry ones?”

“No, not uggy, or furry or pointy,” I said, “Snakeboots.”  They all wandered off in search of someone with uggy or furry boots. 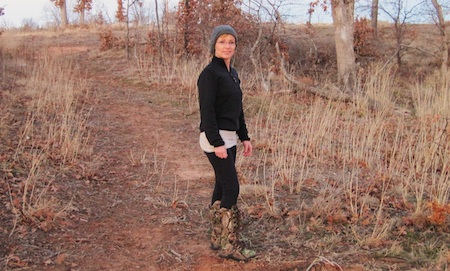 My gal friends at Becoming an Outdoors-Woman (B.O.W.), however, understood how well my husband had chosen, and that the way to a girl’s heart is Gore-Tex and camo.

I would have to agree, he chose well. My only complaint was that the tag inside the tongue rubbed, so I promptly removed it with my handy-dandy seam ripper, ’cause every outdoor gal has one of those, too. 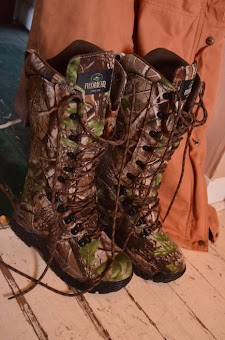 The boots, although knee high, are flexible enough to wear while clambering over boulders and the lugged sole gave great traction. The boots are comfortable, even after three hours of breaking-in walking in them on the first day.  I have seen a few reviews that stated they leaked, but so far they hold up to the claim of being waterproof.  Even though it’s January, I had to test that, of course. I doubt that I’ll deliberately test the snakeproof part.

Most important to me was the fit. I wear a size 5, which is sometimes almost impossible to find in women’s outdoor gear. These boots start at size 5, and they fit perfectly.

My final thoughts – if you want to show someone you love her – buy her a pair of Redhead snakeboots! $99.99.

Follow Traci Schauf’s magnificent adventures in her snakeboots or flip-flops at The Adventures of Mother Nature.