You can shoot these birds before sunrise

I was gifted this past November by a spiritual place called Bosque del Apache National Wildlife Refuge. It contains more than 57,000 acres along the Rio Grande River near Socorro, New Mexico — only about 90 minutes from Albuquerque. I suggest going if you have never been.

Bosque offers an indulgence of walking in beauty. From landscapes to wildlife, there was no shortage of amazement. Breathtaking experiences and soul-filling magical light like no other I have seen and I know now why the great Apache people did not want to let go of it and died to defend it. I was honored to walk upon this land.

If you go, I suggest driving the full marsh loop as many times as possible for you never know what may be around the next bend. The first two crane ponds on the right before you enter the preserve border are spectacular for Sandhill Cranes before sunrise.

Also, the flight deck at sunset is a must! I chose to show some of the amazing light I photographed and how to absorb its colors as closely as possible and bring in the blacks around it by something called “silhouetting.”

It can be a tricky thing to do. You may get one out of 10 to 20 shots that look as close to what you are actually seeing with your eyes. It is difficult, and take a few exposures in manual setting to get it right, but when you do – you will know it. 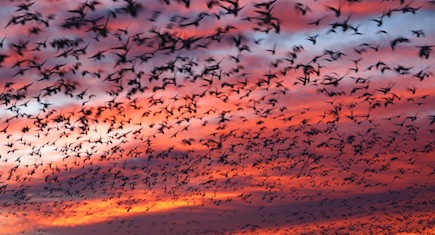 For my first photo, we start with the most amazing sunrise I have ever witnessed. Thousands of snow geese will all take off at sunrise and you have to be ready for this and the light is changing and morphing … meaning you have to be on top of your test shots. It was shot with my Olympus E5 and 12-60mm lens. At F3.7 and 1/40 second. 36mm focal length at ISO 400. I did a slower shutter to blur the birds a bit and it was handheld. 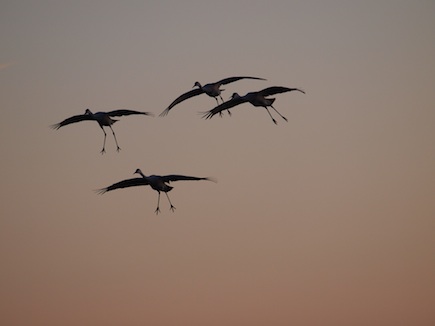 My second shot  was also taken at flight, but at sunset, when all the Sandhill cranes start to come in and roost for the night. It was taken with my E5 and 150mm F2 lens which is used in conjunction with a 2x teleconverter to achieve a 600mm fixed focal length. With Olympus the sensor doubles everything automatically. It was taken at F4 and 1/400 second. They were flying, so faster shutter speed is needed if you want them to be sharper in the outlines. 600mm focal length at ISO 400. 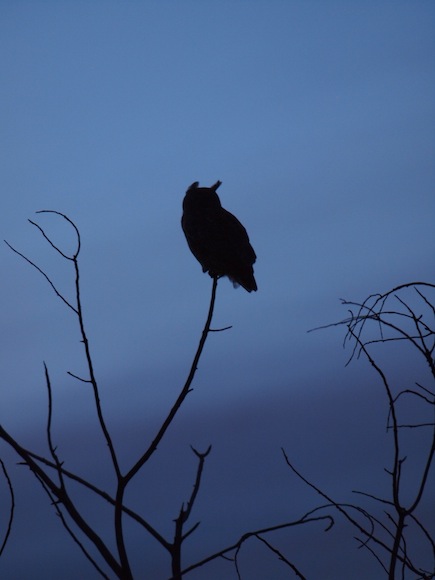 My third shot is also at night with almost no light left, which brought in the blue hue nicely. It was my last night and my last ride around my favorite drive there on the marsh loop. It was my goodbye shot. I first noticed this Great Horned owl one morning when no one else could spot it in the salt cedar during the day they can really blend in great. This shot was not easy. I shot it at F4 and 1/10 second 600mm focal length at ISO  640. The light was gone and had to balance lens on the car window. Higher ISO, maximum aperture and slowest shutter possible to work in that light. The owl was hunting and could have flown at any second. They were all coming out blurry except this one I got one great one out of 20! 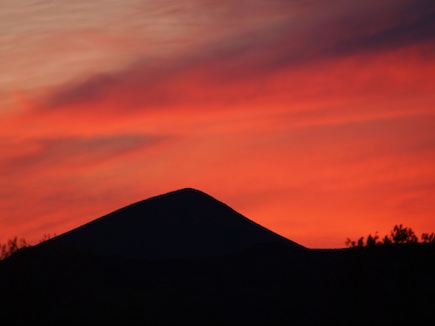 My fourth shot was a sunset that was setting behind this pyramid-like mountain and reminds me of Egypt. It was shot at F4 and 1/60second at 600mm focal length at ISO 200. I really wanted to absorb the light and make the blacks rich. 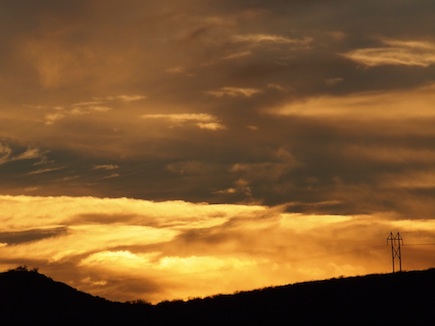 My last shot to share is also a sunset that was the most gold sunset I saw out there. It was shot at F11 and 1/2000 second at 600mm focal length at ISO 800. This sunset was still very bright, compared to the last one, which is why I shot it with faster shutter speed and smaller aperture to let less light in for a shorter amount of time.

It is much easier with digital to achieve these silhouette looks for we can test shot and make sure we are reproducing similar to what we are seeing. 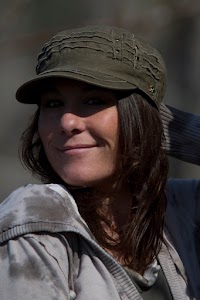 You see, it’s all about making your exposure sing!