Sara Ahrens is back with ‘Offbeat’: Taking control of the Smith & Wesson 500

I have no practical reason for purchasing a Smith and Wesson 500. This revolver is in reality a much too powerful a gun for me to shoot comfortably, the ammunition costs more than I can afford to shoot it with any regularity (about $3 a round), and last I checked, Illinois doesn’t have any elephants to hunt.  So why didI buy it? Probably the same reason some people ride roller coasters, for the thrill. 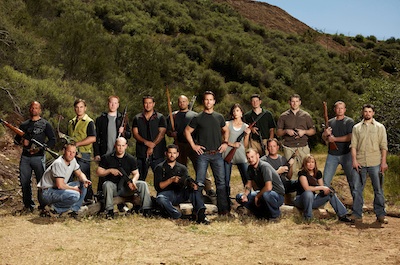 I first “experienced” the Smith and Wesson 500 during the first shooting competition on Season 3 of the History Channel’s Top Shot. When Colby unveiled the colossal revolver, I’m sure I smiled – but not because of my fascination over it – but,  because I was worried. I have little experience with revolvers of any size. I had no idea what kind of ride I was in for because I had never shot that caliber. When it came to be my turn to compete, the very first round I shot physically moved me backward. That gun packed a wallop that I had yet to experience when shooting a firearm. It felt like I was shooting a 12-gauge shotgun in the form of a revolver. It didn’t hurt to shoot, but I knew I must have looked ridiculous shooting it. (And after watching the first episode, it turns out I did!) I managed to squeak out a victory, and keep my thumbs intact. But that six rounds I shot didn’t leave me feeling good about my experience or my performance with the 500. That experience haunted me. I don’t like to feel out of control and that gun controlled me. I don’t like to leave bad experiences like that unresolved. I thought to myself that if I ever had the opportunity to shoot the Smith and Wesson 500 again, I was going to and learn to control the beast – or go broke trying.

I contacted Smith and Wesson to review the 500. When the firearm came, I picked it up on my lunch break.  When I came back to work at the end of my shift, I brought the 500 inside the police station with me.  I went down to discuss a case with our some detectives. One of my coworkers is a gun fanatic, so I opened the case to show him. Immediately upon opening the case, the faces of all the detectives in the office lit up – it’s an uncontrollable response.  The 500 is a massive revolver and its size is a curiosity to anyone who sees it. I have shown the 500 to a couple dozen people and the reactions are all the same: a huge smile, a giggle followed by an expletive, a request to handle it, the opening of the cylinder – followed by an insertion of the pinky in one of the chambers, another expletive, and finally a posed photo with the “freakish” firearm.  This firearm has mesmerizing appeal to any gun person. What person doesn’t wish they had that kind of immediate, positive effect on people? She gives it a try, again, at the range. Photo courtesy of Michael Ahrens

One lesson I learned after shooting the 500 the first time is that it is better for me to shoot it in double action mode. On the show, I cocked the hammer back thinking that double action would cause me to pull off my target. Cocking the hammer actually created more issues than it resolved. First of all, the frame on the 500 is so large that in order to cock the hammer, I have to completely give up my grip. Secondly, once I would cock the hammer on the 500, the resulting trigger pull was so light and the travel distance before the shot would break is quite short. I found myself shooting before I was completely on target.  This occurred when my true intention was to prep the trigger. I found that keeping the 500 in double action does not result in me pulling off my target because the trigger pull is remarkably smooth and consistent. Since this was the second time I shot the Smith and Wesson 500, I knew what to expect and I braced myself for the inevitable beating I was going to take. I loaded the enormous rounds and endured the same physiological responses I would endure if I were getting ready to ride a roller coaster. I could feel my heart rate hasten, which caused me to take a deep breath, then I clenched my teeth, forced my eyes open, and held on tight for the ride.

My second experience with the Smith and Wesson 500 was far more enjoyable. Perhaps my ammunition was less powerful than what I first experienced, or perhaps selecting the 10.5-inch barrel assisted with the improved management of recoil. Or maybe, I was simply familiar with what to expect.  Just like riding a roller coaster, the more I shoot it the less scary it is … but, it’s still a thrill! The perks of being married to Sara! He gets to carry her bags AND shoot her guns! Here's hubby Michael Ahrens on the firing line. Photo courtesy of Sara Ahrens