In this #TbT post, Stacey Huston describes how to find little things in nature to improve your outdoor photography skills. Now that spring is here and the earth is bursting with color again, these tips will help you find better content to shoot and also, make you aware of your surroundings as you’re out in nature.

Shoot to Thrill: Stacey Huston on signs and signals of nature

I love tracks. I am always on the lookout for tracks and sign. I think survival was engrained in me as a young girl, but I wonder how much of it I picked up out of curiosity and a little fear of the unknown. I don’t recall my parents ever sitting me down and “teaching” me how to recognize and read sign, but there were many little moments that caught my attention and helped me to realize that it is important to always be aware of what is going on around you.

I was just a little girl, maybe 9 or 10 years old. It was a beautiful spring day.  My parents had taken me out hiking and fishing along an icy mountain creek for brookies. This was a place we had not explored before and as evening settled in, casting long shadows through the trees, Dad was still headed in the opposite direction of the truck. We had our dog, a small brown dachshund, with us. I looked down at her and noticed that she had her tail tucked. Confused, I looked up at my mom and realized that she had a worried look on her face. Now, feeling uncomfortable myself, I stepped a little closer to her side. A little farther up the draw, Mom took another look around, let out a deep breath, and said, “Honey?”

My dad turned and gruffly asked, “What?” as though he was totally baffled and maybe even slightly annoyed by her tone, but the laughter dancing behind his eyes told a different story. My mom just planted her feet and raised her eyebrow. She checked the position of the setting sun and pointed at a freshly overturned rock, a rather LARGE overturned rock.

Even at such a young age, I didn’t need anyone to explain to me exactly what any of this meant. We had already passed several of these upturned boulders in the last half hour, and that was enough for instinct to kick in and I was starting to get scared. I recall my dad mumbling something about girls being chicken, and something else about what might be just over the next ridge, but he turned around and, reaching out to hold my mother’s hand, led the way back down the game trail that would take us back to the truck. 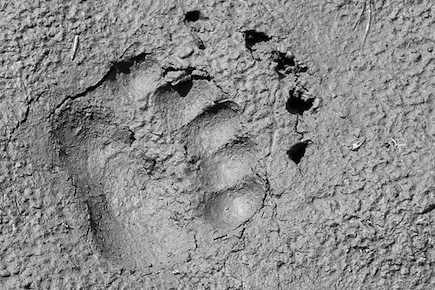 Not human. Do you know what it is? Photo by Stacey Huston

As a photographer, the question I get asked the most is, “Where do you go to get all these photos?”  This question never fails to baffle me and I am never quite sure how I should answer. I take them outside. Everywhere. And that question is usually followed with, “How do you know where to look?”

There really is no secret, wildlife is everywhere, but it is helpful to know how to read sign so that you are aware of what creatures ARE around.

Now it is 30 years later. I am a wife and a mother. And, I am oftentimes out in the woods alone or with my own children, and knowing how to read sign isn’t just a skill that can aid in photography, it also is an important skill to have to keep from putting myself or my children in unnecessary danger.

It isn’t just about the animals that you can see. It’s about knowing how to use all of your senses and knowing how to tell what animals are there that you don’t see as well.

Listen. I have located many species just by their calls alone. A startled antelope on a ridgeline, or the call of an eagle or hawk in flight, can reveal its location and might give you just enough time to ready your camera for a photo. Large animals normally travel through thick forest without a whisper of sound. But they can also be surprisingly noisy by breaking branches and dislodging rocks or brush in their play, passing, or in their search for food. Small creatures, like birds and squirrels, are little tattletales and will alert the entire forest of any intruders, human or otherwise that they feel might be a threat. Know the alarm calls, as well as the normal sounds that different species make.

Use your nose. You can often smell wild creatures long before you see or hear them. Most people know what a skunk is just by smell alone, even a faint odor from a distance. But many people don’t realize that elk have a very unique and pungent smell, as do antelope and other big game species. The scent of rotting creatures carries a long ways in the woods and will also draw predators and birds.

Touch.  Some of you will think this is horrible, but often I will reach down and feel scat. A huge pile of bear scat in itself can be an intimidating sight. But, if you place your hand just above and can still feel heat rising, then that ups the potential danger to a whole new level. But beyond the scope of physically touching something, if you are paying attention (as you should be) when you are out, you can sense creatures that are there long before your eyes have actually located them. I can’t count the times that a chill has run up my spine in the woods and to this day wonder if something was really there or if it was just my imagination. Listen to that feeling. Trust your instincts . . . but don’t be paranoid.

At times I have felt something watching me, only to scan the forest and discover a deer, frozen staring straight at me, or the beady eyes of a squirrel observing me from an overhanging branch. I have walked within yards of bedded elk. They knew I was there long before I spotted them, but they stayed put and did not budge because they believed they were hidden, and I kept moving and was careful not to give any physical signs of noticing them. 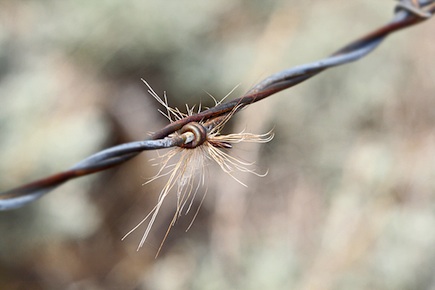 What does this tell you? Look for the trail below! Photo by Stacey Huston

Sometimes the signs are obvious and sometimes they are harder to detect. Freshly used game trails, paths left by herds of migrating herds of elk, deer, antelope, mountain sheep and other animals are obvious signs. Concentrations of scavenger birds, such as ravens, magpies, or buzzards, can alert you to the location of a carcass. Eagles and predators seizing the opportunity for an easy meal often frequent carcasses.

It’s easy to notice animal tracks in snow and mud, but it’s also important that you know how to tell when those tracks were made. Know how to recognize the not-so-obvious signs.

All are simple signs that can keep you from danger or alert you to potential subject matter for your photos. 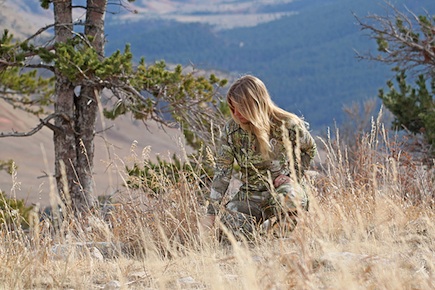 For safety’s sake, it is important to remember that predators are just that. Bears, wolves and mountain lions don’t wander through the woods snarling and growling. They stalk quietly, searching for their next meal. They are hunters.

Trust your instincts and know your skill levels. There is no reason to place yourself or others in danger.

Also be aware that if the woods around you suddenly fall silent, oddly silent, it is usually a telltale sign that the creatures that reside there have detected danger, but this danger may just simply be you.

Visit A Focus in the Wild and tell Stacey you dropped in for a visit!