The Little Gal is back in school and summer vacation is long over. I have been hunting bears and Hank has been guiding hunters. Our schedules are full, so to speak. On Friday, Hank told us that the boat was going to be put away for the winter next week. The Little Gal and l decided we had to go to the lake one last time. The Little Gal still had a score to settle, and it is about bowfishing.

Over the summer the Little Gal found a sport she decided she wanted to conquer. Bow fishing. She told us she needed a bow. She is small, thus the name “Little Gal,” and isn’t able to pull a great deal of weight. We found her a youth-model fishing bow, and she has spent the summer trying to master it. After shooting high, low, left and right, she had glanced her arrows off of a couple of the big fish. She had frustrating days and exciting days. Day after day she tried and day after day she came home with nothing. All of a sudden it seemed summer was over and it was time to go back go school. She hadn’t arrowed a fish yet.

We loaded up with the news of the boat being put away. Perched at the bow was that Little Gal. She had her bow up and ready. We went straight to the “Honey Hole” and trolled through, but there was not a fish to be found. The Little Gal was a little disappointed. We worried that the weather may be to cold but headed to another spot anyhow. As we approached we saw a few carp finning and we knew “it was on.” Without anyone saying a word, the Little Gal jumped to her feet as the fish dove deep.

The Little Gal pursed her lips in disappointment. “Mom. You’re driving too fast.” I told her to be patient and motored to the other side. The Little Gal stood in silence at the bow of the boat. She was looking intently left and right. I trolled slowly and then we saw a couple more fish finning in the sun. The Little Gal let an arrow fly … but it was too low. She gave a frustrated glance.

We told her to be ready because there were more ahead. I put the boat in gear and she reeled in as quick as you’ve ever seen. She had her bow up and ready before we knew it. Then she let another arrow fly and WHACK! She nailed one! The arrow didn’t bounce off this big guy, it penetrated all the way through. She jumped up and down and shrieked as she had finally arrowed her first fish.

“Mom! Stop the boat! Hank! Hurry! Hurry! Don’t let him get off! Hurry!” Hank dragged the fish in for her. The Little Gal looked at it in amazement. Not because she’d never seen one before, but because this one was “hers.” I quickly turned the boat off and we ran to admire her first fish. With a HUGE high five and big hug we resumed our positions.

I put the boat in gear again. We continued our day and the Little Gal found another carp to smack. She spotted it and drew. It darted to the left and she swung at full draw like and old pro. She led it and then let her arrow fly. It hit her target with direct force, and then she was screaming for Hank to drag in another score. 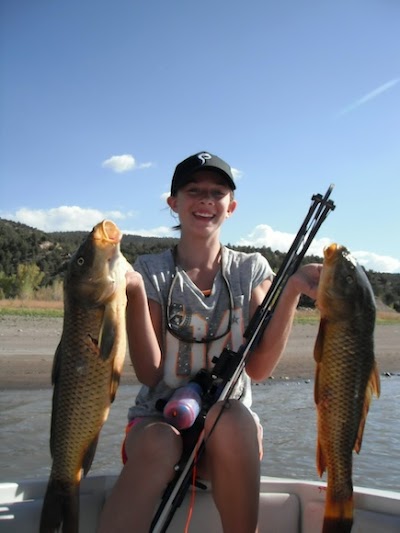 The Little Gal and her carp. Photo by Mia Anstine.

The Little Gal had an awesome finale to the season. Her score with those big ole carp has now been settled. Not one but TWO arrowed fish for her. Hank and me? We had big fat zeros. She says “I’m catching up to you guys fast.” Gotta love it!

Follow Mia Anstine’s life at her excellent blog, My Many Outdoor Adventures.