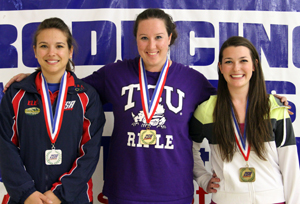 High scores were the norm for the Women’s 10m Air Rifle athletes at the 2012 National Junior Olympic Shooting Championships (NJOSC). In her fifth NJOSC, Catherine Green (Coventry, R.I.) stole the show with an outstanding performance, which also became her new personal best.   Green, a sophomore at Texas Christian University (TCU), entered the final […]