Manchester, VT—A one-of-a-kind exhibition at The American Museum of Fly Fishing celebrates women’s contributions to the sport. A Graceful Rise: Women in Fly Fishing Yesterday, Today, and Tomorrow honors the key (and until now, often unsung) roles women have played in fly-fishing history itself, and the art and literature of the sport.

A Graceful Rise opened June 11 and runs through April 2012. 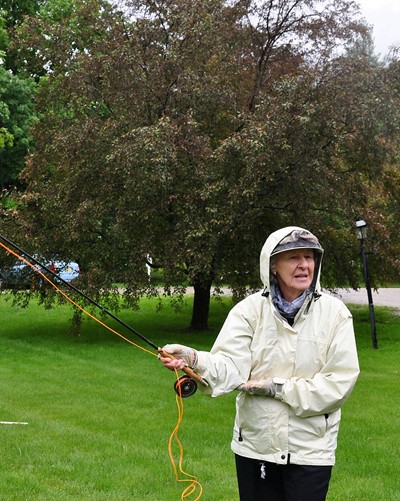 Joan Wulff, the First Lady of Fly Fishing, demonstrates casting techniques at the opening festivities for A Graceful Rise, June 12. Photo by The Fly Girl.

“As far as we know, this is the first exhibition of its kind, anywhere,” said AMFF Executive Director Catherine Comar. “Women have made enormous contributions to the sport of fly fishing, for centuries. But in many cases, women’s impacts on the sport are little-known. We hope that A Graceful Rise will change that.”

It looks to your correspondents as if it will. 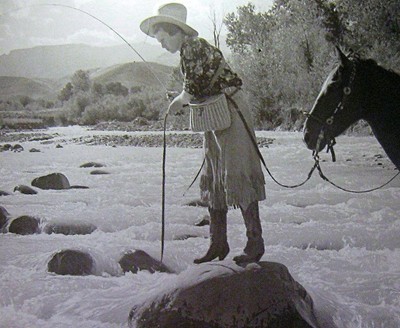 Photo by The Fly Girl.

Entrants are greeted by a dramatic photo of Annie Willston Belden, fishing in the Greybull River on her father’s ranch in Wyoming about 1920. 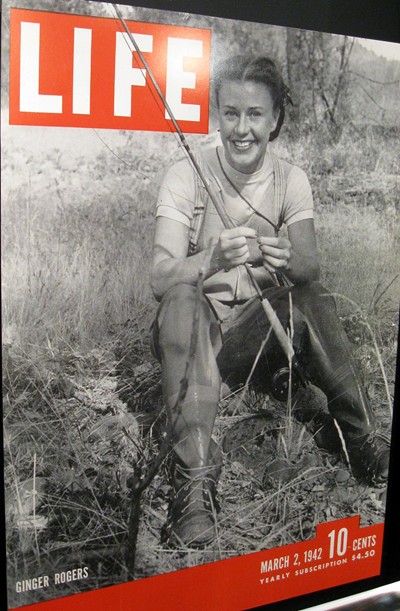 Actress and dancer Ginger Rogers graces the cover of a March 1942 issue of Life magazine. Photo by The Fly Girl.

Inside the exhibit space are countless delights for anglers and artists alike: photos, artwork, tackle, flies, and artifacts of all kinds from women anglers. Surprises are everywhere: Cornelia Thurza “Fly Rod” Crosby’s tea service; actress and dancer Ginger Rogers, streamside, in hip boots, with fly rod, graces the cover of a 1942 Life magazine.

Many of the women whose lives are celebrated (or memorialized) in A Graceful Rise are or were artists as well as anglers—especially if one counts fly tiers as artists. Museum officials have done an amazing job packing so much information about so many women, and so many artifacts and photos to delight the eye and mind, into their exhibition space.

• Karen Graham is a fashion model (more than 20 Vogue covers in the 1970s, and modeling for Estee Lauder, among others) and avid angler. When Graham was 54, Estee Lauder asked her to appear in a magazine campaign, after she’d moved to the Catskills to pursue her fly-fishing passion. One famous ad photo was shot with Graham fishing on New York’s Esopus Creek. She continues to lend her name to fly-fishing and fisheries conservation causes. 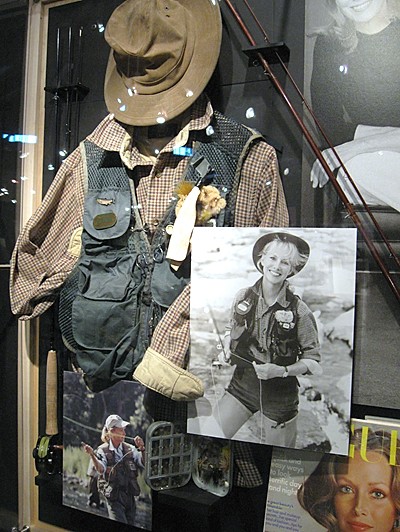 A Graceful Rise displays the fly-fishing gear that model Karen Graham wore in 1999 for one of her many Estee Lauder photo shoots. Photo by The Fly Girl

• Carrie G. Stevens (1882–1970) of Maine was the wife of a busy guide in Maine’s Rangeley Lakes region, famous for brookies and landlocked salmon. In 1924 she won second place in a Field & Stream contest for a 6-pound, 13-ounce brook trout she caught with a feathered streamer fly she invented called the Grey Ghost, designed to imitate a smelt. Orders for the Grey Ghost and her other patterns poured in, and Stevens had a new career and worldwide fame. Stevens’s signature flies are featherwing streamers, of which the Grey Ghost is the best known.

• Mari Lyons is a painter whose work is in the collections of the Museum of the City of New York and Rider University, as well as many private collections worldwide. She accompanied her husband, author and publisher Nick Lyons, on numerous fly-fishing trips in Montana. Many of her paintings were published as illustrations in four of his widely admired books of angling stories.

• Dame Juliana Berners (born c. 1388) was an English Benedictine nun of noble birth, Prioress of Sopwell Nunnery, and apparently avid falconer, angler, and huntress. To her is attributed the Boke of St Albans (discussing all the above) first printed in 1486. Part of the Boke is Treatyse of fysshynge wyth an Angle, the oldest surviving description of fly fishing in English.

• Joan S. Wulff, known as the First Lady of Fly Fishing, is a pioneering angler, tournament fly caster, author, and instructor. She began winning fly-casting championships (often against all-male competition) by age 16, and in 1959 became the first female spokesperson for a fishing tackle company (Garcia), then the world’s largest. She continues to instruct anglers and angling guides at the Wulff School of Fly Fishing.

• Cornelia Thurza “Fly Rod” Crosby (1854–1946) was a fly-fishing fixture in New England and New York City in the late 19th century. Starting about July 1889, she wrote regular features for the Phillips Phonograph, her local newspaper. Throughout her life, she was ahead of her time in promoting conservation of fish and game.

• Mary Orvis Marbury (1856–1914), born in Manchester, was the daughter of Orvis Company founder Charles S. Orvis. At age 20, she began managing the company’s commercial fly tying operation, supervising the group of women who tied 400 different patterns of Orvis flies. Her landmark 1892 book, Favorite Flies and their Histories, was one of the first works to catalog American fishing flies. 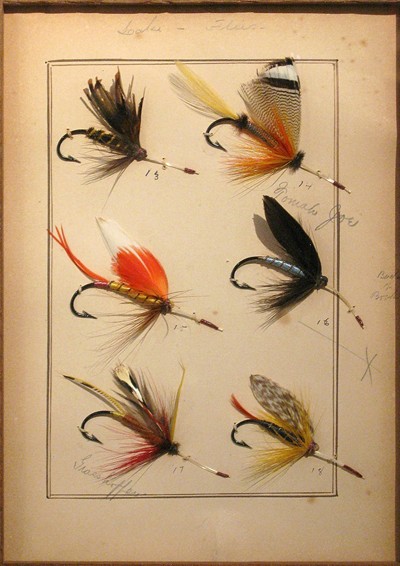 Some of the countless flies Mary Orvis Marbury and her team of lady fly tiers produced in Manchester for The Orvis Company in the late 19th century. Photo by The Fly Girl

After your visit to the museum, you won’t want to pass up a stroll through The Orvis Company store next door, which has everything for anglers and shooters, from fine fishing tackle and shotguns to clothing and home furnishings.

The historic Manchester/Arlington area of southwest Vermont is a wonderful place to visit, graced with beautiful scenery and friendly people. Much of the area lies within the Green Mountain National Forest. For information on accommodations and attractions, visit Manchester and the Mountains.