Sara Ahren’s OffBeat: Swarovski — afield or on a bust — simply the best

Like most people, I have a list of things that I would love to buy someday, but cannot really justify the expenditure on myself. Optics fit in this category and I have recently realized that I cannot avoid owning a pair. I have had occasions this past year where they would have been useful at work and at play. If anyone had asked me last year what I would ask for Christmas this year, binoculars wouldn’t have even been on my radar – but that’s exactly what I am asking for and I am thrilled!

Over the past year I returned to patrol as a supervisor. As part of my responsibilities, I am tasked with reducing the prostitution problem in my community.  This requires many strategies, but one of those strategies includes some undercover work. I’ll let your imaginations take over at this point as I cannot disclose details, but during these operations visual acuity in varying lighting conditions is necessary. Another sergeant with whom I work owns a pair of Swarovski binoculars. I do not know which model he owns, but I know they are about 10 years old.

Because I do not own my own set of binoculars, I have borrowed his a couple of times. I borrowed these binoculars after the Top Shot optics debacle and I finally realized the difference between mediocre and quality optics. Make no mistake – a  10-year old pair of Swarovski binoculars blew away the ones provided on Top Shot. 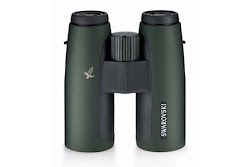 With the intention of eventually buying a pair of Swarovski binoculars, I tested out a pair. Swarovski sent me the SLC 10 x 42 HD. I initially had hoped to try out the compact CL Companion 10 x 30, which were a little more in my price range. Unfortunately they were unavailable and after discussing with Swarovski my intentions for the use of the binoculars, it was decided that the SLC 10 x 42 was a better choice. I found the SLC 10 x 42 HD binoculars to be just as amazing as my friend’s pair. I will say that the MSRP of around $2,300 was … sobering.

Even though the price of the SLC 10 x 42 HD was a bit shocking to me, looking through Swarovski binoculars was a very different experience than I have had with other binoculars. After really using them the price made sense, if that makes sense?

I will attempt to articulate my experience with these binoculars, but you really have to use them to understand. I’m not suggesting you simply pick up a pair of Swarovski binoculars and look through them at some random object. I mean pick up a pair, adjust them properly to your eyes (I guess there’s a way to adjust binoculars to your eyes, why would I know that?) and look at an object that in your life you may really want or need to see. What kind of things do you really need or want to see? For me, it’s a bullet hole in a target, a license plate or a person three blocks away, or the deer I shot that went in a brush pile to die. Being able to determine if he was dead or alive from my tree stand was exciting.  Without those binoculars, I’m not sure I could have even known for certain he was there. 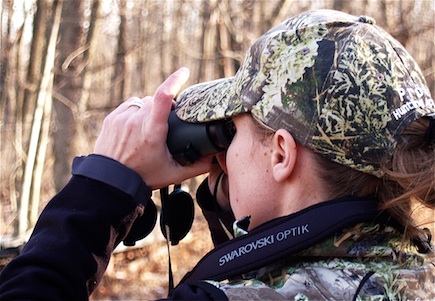 Sara while hunting whitetails in Illinois in 2011. Photo by Mike Ahrens.

With a quality pair of binoculars like Swarovski, natural bodily movements won’t prevent you from seeing what you need to see. I have found this to be the biggest problem I have experienced with other binoculars. Any bit of shaking, makes it impossible to see minutiae. The one feature of Swarovski binoculars that I found to be different from others is that whatever object I focused on really jumped out at me. It is like looking at an object that is situated in front of a backdrop. The objects appear almost three-dimensional and seem to float in front of the backdrop.

I used the binoculars frequently in my 30-day test period. A public relations associate with Swarovski Optik spent time with me on the phone discussing how to properly adjust the binoculars for my eyesight. Since I was unaware of this process, I thought I would share it. 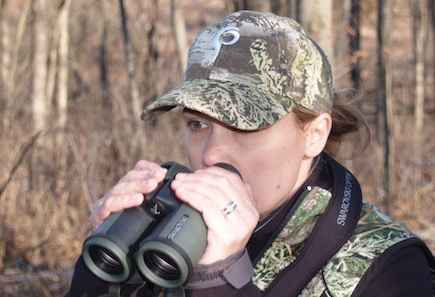 Once I had the binoculars sighted in for me, I found a use for them almost on a daily basis. The more I used them, the more I realized everything I have been missing, both visually and tactically. I realized that at work and in leisure, having the ability to study behaviors without the subject’s knowledge doesn’t make me a stalker… it just gives me a tactical advantage.

Visit Swarovski’s fine website to learn more about its amazing line of binoculars and other optics.

Sara Ahren’s OffBeat is sponsored by Otis Technology. From the front lines to the hunt of a lifetime.