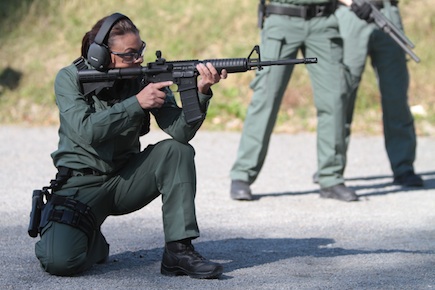 Fit, Function and Performance for Women
BLACKHAWK’s new offerings aren’t men’s clothing in smaller sizes—they’re all new garments cut, fit and designed especially for the female body. For those that protect and serve the clothing they wear means more than comfort. They need it to allow them to do their job to the best of their ability every time. This clothing line takes that into consideration and gives women never-seen-before quality, comfort and performance.

“We are proud of this new line,” said Director of Apparel Development Pat Christianson. “We started from scratch with these garments to find options that really catered to women. Our duty and tactical gear is designed with performance in mind. And we also added style and comfort into options ladies can wear when they’re not working or training. This line is off to a great start, and will only continue to grow.”

Train Hard or Relax in Comfort
Active wear introductions include antimicrobial technology, moisture-wicking and compression to give women excellent options for the gym or next training session. For time off duty or just out and about, BLACKHAWK! offers women’s tops and pants.

These stylish pieces factor in everything from concealed carry to wrinkle-resistant and moisture-wicking fabrics. Features like this have made BLACKHAWK’s men’s clothing very popular, and are sure to be a hit in a line designed especially for the modern female.

Aysha Webb at SHOT 2012
BLACKHAWK! spokeswoman Aysha Webb will be at the 2012 SHOT Show. This tactical firearm instructor is a natural fit for the brand. Webb trains shooters at LAX Firing Range in Inglewood, California. She’s also an acclaimed jazz singer. SHOT Show attendees can meet this multi-talented shooter, instructor and performer at the BLACKHAWK! booth #14562 at 3:00 PM the first three days of the show.

This new line is expected to be on shelves by mid-April 2012. Stay tuned to www.blackhawk.com and www.facebook.com/blackhawkpg to learn more about the new women’s apparel.

For more information on BLACKHAWK! and BLACKHAWK! products, log on to www.BLACKHAWK.com or call 800-694-5263.

About ATK Security and Sporting
ATK Security and Sporting, headquartered in Anoka, MN, is a leading technology developer and supplier of ammunition for law enforcement, military and sporting applications; a manufacturer of optics, reloading gear and sport shooting accessories; and a leading producer of tactical accessories. The company serves sport shooting enthusiasts, law enforcement professionals, military and tactical markets worldwide. The group’s products include some of the most widely known and respected brands in the industry, including Federal Premium, CCI, Speer, RCBS, Alliant Powder, Champion, Weaver, Eagle Industries, and BLACKHAWK!

About ATK
ATK is a global aerospace and defense company with operations in 22 states, Puerto Rico and internationally, and revenues in excess of $4.8 billion. News and information can be found on the Internet at www.atk.com.