Reeling in the Deep

Maryellen Mara-Christian would be the first to admit that she’s not intimidating. Standing at 5 feet-5 inches and 120 pounds, she’s dwarfed by the alligators she hunts. The slightly built woman with a tumble of curly blonde hair stands proudly next to a scaly dinosaur lookalike nearly nine times her size.

In a sport dominated by men, the massive alligators she’s landed are the envy of both male and female hunters alike. In 2010, she made headlines when she landed a 13 foot-4.5 inches, 1,025-pound gator, during a trip at Black’s Camp, a fishing and hunting camp in Cross, S.C. Then she stunned everyone again this past fall, when she and her hunting party once again landed another huge gator. This one was a “mere” 12 feet-11 inches long and 650 pounds and was also looming in Lake Moultrie. 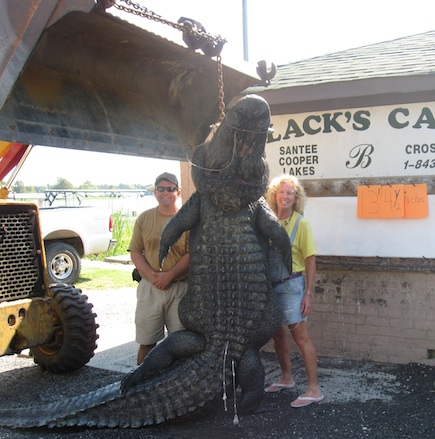 “So many papers made a big deal about my size, but being big or small … it doesn’t matter,” Mara-Christian said. “It’s always a team effort. (Last year’s alligator) was so heavy it took a truck to lift.”

She also attributes part of her success to luck and having just the right conditions. But Kevin Davis, Black’s Camp guide, insists that her skills were what made the difference.  Davis said alligator hunting combines boat fishing with big game hunting and Mara-Christian is experienced in both.

Alligator hunters gather in a small party on a fishing boat, often with a guide. A hunter uses a rod and reel to cast into the lake. Much like fishing, the hunter hooks into a gator and reels it in. But due to the size and nature of the animal, the hunter works with a party to snare the gator as it’s pulled closer to the boat. Then, in certain states, such as South Carolina, the hunter must shoot the alligator in the head before bringing it in the boat.

“You don’t get many shots at these things; they’re so smart. If they’re within casting range, you have to be super accurate. She did it by herself, all on her own,” Davis said. “She’s one heck of a hunter.”

Indeed, these hunting exploits brought her national fame. But they also attracted the attention of those who did not understand the need for conservationists to cull the alligator population. 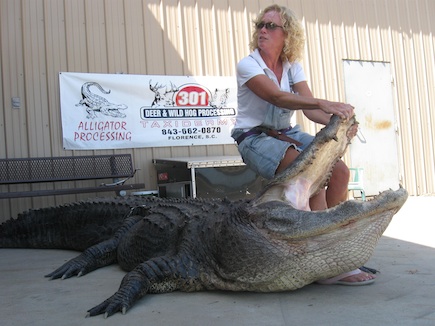 “Mother Nature can be beautiful, but she can also be cruel,” Mara-Christian explains. “If not managed, the healthy population will not last.”

For Mara-Christian, hunting is about more than the kill, it’s about being outdoors and spending hours appreciating nature. In Massachusetts, she didn’t grow up with a hunting heritage but was forever changed once she discovered it. A past boyfriend introduced the city-dwelling Mara-Christian to hunting. And now, the former bank marketing manager has spent the past several years seeking outdoor adventures with her husband Mark Christian, a retired firefighter and bear-hunting guide. They call Fitchburg, Mass., home but often find themselves travelling across the country to hunt.

“But you don’t need to be a hunter to see the beautiful things out there,” Mara-Christian adds. “People (stuck inside) are missing a lot out of life.”