Ann Jandernoa is an upland bird dog trainer and guide in Wisconsin. From forestry to mapping to teaching seminars, she is an expert on grouse and grouse habitat.

She Guides is sponsored by Remington Outdoors

My family hunted and fished; even my mother trapped.

I grew up in southern Michigan. In the summers we had a boat and would go out on Lake Michigan, with downriggers. My dad would take trips out West to hunt elk and mule deer before it was popular. It was one of those do-it-yourself hunts, my dad would never go with a guide. He was actually quite successful. My family fished a lot, smoked fish and my mother ran traplines. She would get up, go out and set a trapline, come back to make breakfast and then she would go to teach Sunday school. That was my family. We grew up loving the outdoors and for me it’s a need, day in and day out. I can’t function in the concrete world.

In the Upper Peninsula, there’s loggers, there’s woods, you live it, you breathe it.

I went to college down South for awhile. It was there that I picked up my private pilot’s license doing biology. But this feeling kept calling me back up north and I transferred up to a college in the Upper Peninsula (UP) of Michigan and studied Forestry. When I got my degree, I started running logging crews. At one time, I had 30 guys working under me – from loggers to truck drivers and machine operators. There was only 1 other woman in the UP running logging crews. I was the first woman hired by Connor Forest Industries in the company’s 100-year history. They were taking bets, literally, in the sawmill, that I wouldn’t make it past winter. 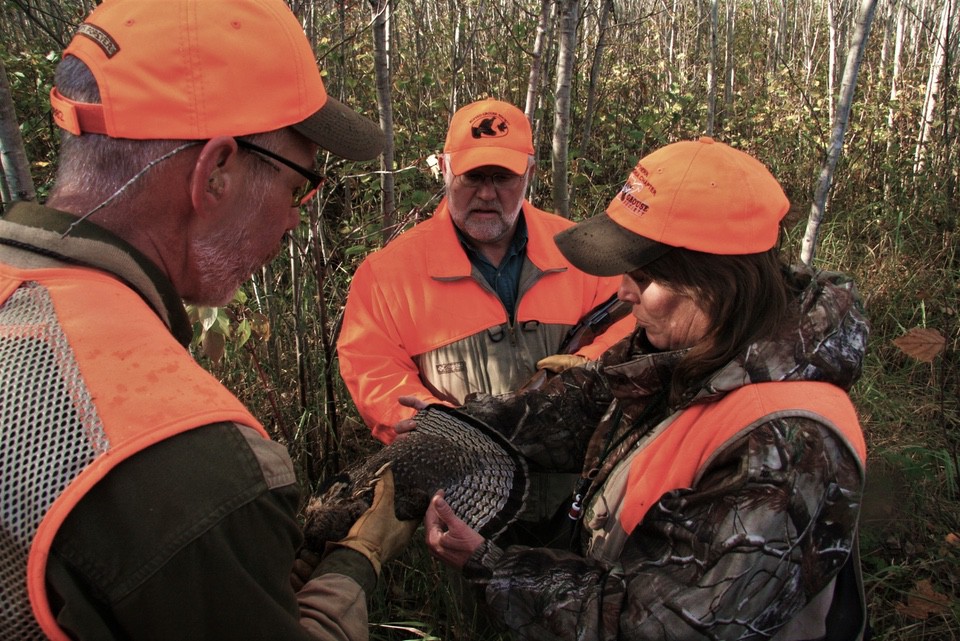 Explaining how to sex a grouse. (Paul A. Smith photo)

I think so much of it is that how you handle it when you’re dealing with a society of workers that have never had a woman around.

I ran a big log yard, it was tough. There were those who believed and wanted to see a woman succeed, and then there were the other ones that would do everything they could to foul you up and those guys were really a minority. You can’t come into that knowing it all … and you don’t know it all at that age anyways. Even when you get older, you never know it all. Ask for feedback, ask for ideas. Some of the loggers had 40 years of being in the woods, they were a wealth of knowledge. I ended up making a lot of really good friends, and people that, you know, they were just there for me because I was single and no one was around. It was just me and my dog up logging in Upper Michigan! Yeah, it was an adventure. 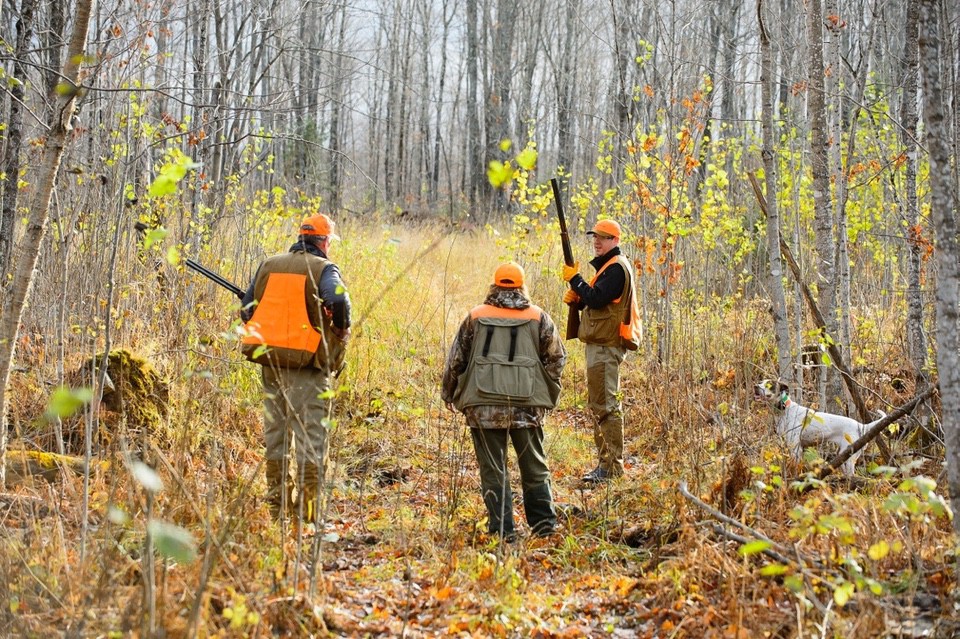 Talking with clients about the hunt and what we are going to see and do. (Chip Laughton Day’s Afield photo)

It’s not that everything has to be clear cut, but you need to manage your forest. Conservation is important because it’s the structure of every specific animal or bird working together. If you look at the food chain, you’ve got the hare and the grouse at the bottom. You take those 2 away, that affects the coyotes and the raptors. Each one is dependent on what’s below them. A male grouse needs 8 to 11 acres, a hen needs 44 acres to raise her brood. Since the males are spread out, she might utilize 45 acres moving between different males. How do you grow a population if you don’t have the right habitat?

When I started grouse hunting I didn’t have a bird dog. I would just walk ’em up.

My dog was a mutt. There was no way that dog was ever going to point a grouse, it would have run everything off. I would run into hunters who were coming up from down South and they would find out I was a forester and ask me where the birds were. So, I’d be drawing maps on the hood of the company truck telling them where they should go. That was the very early start of my business. The maps led me into doing seminars on habitat, and it just grew from there. I’ve been able to take my passion and turn it into a business. 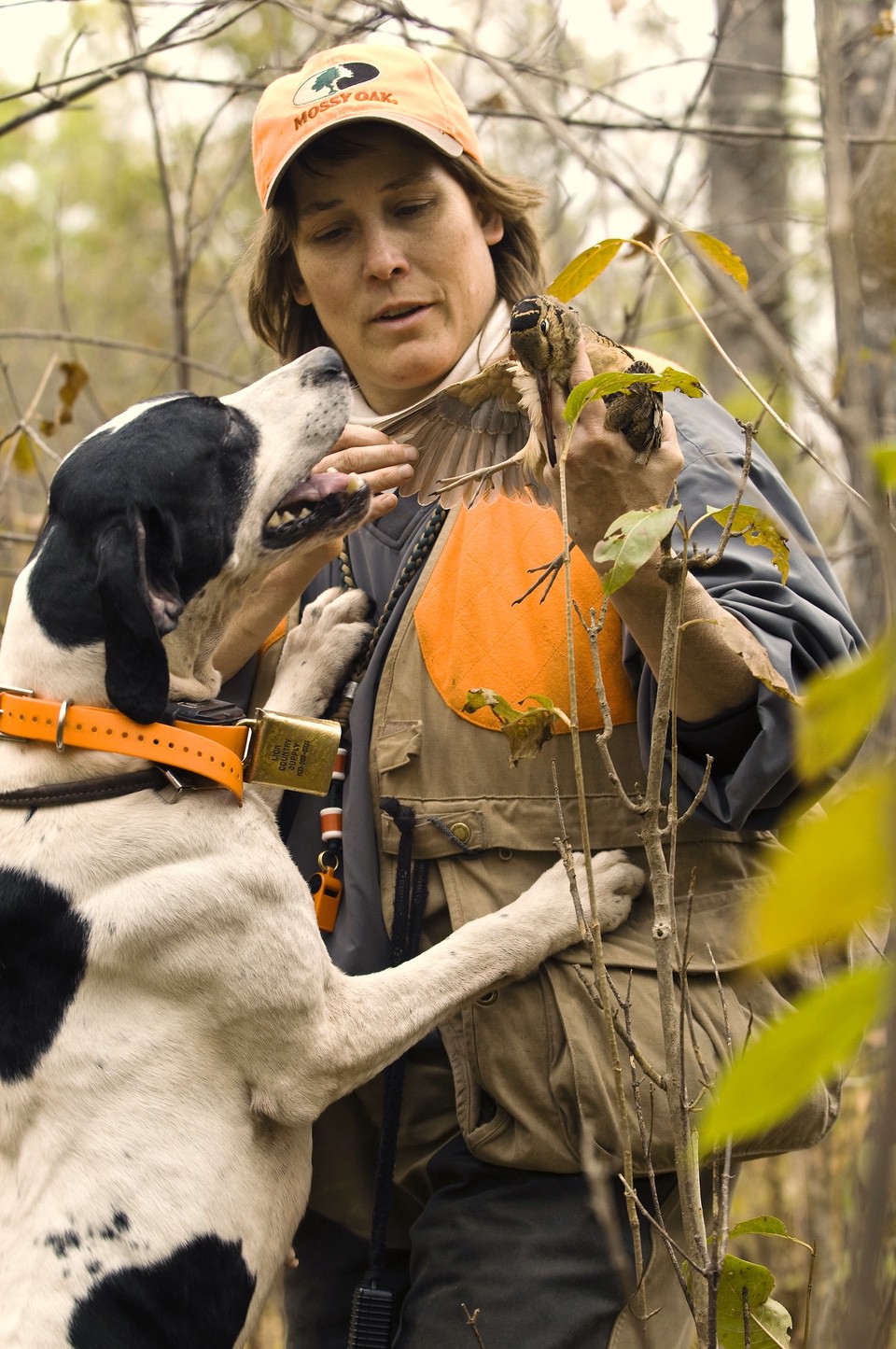 My typical day? I get up early and I train dogs.

I raise English Setters and train them daily. I train them as if I were going to keep them and guide with them, that’s the level I expect. Most people don’t train to that level because they don’t know how to. When you’re getting paid to guide, everything has to go right. I want the dog to behave, have control, and someone cannot turn back to me and say, “Your dog just messed up my shot.” Maybe I set the bar too high, but I don’t think that’s a bad thing, it leads you to excel. Then I come home and work on my maps. We have traditional maps, chips, it all runs on GPS and digital off-line maps for phones and tablets. It shows grouse habitat and public land boundaries. I’ve done a lot of GIS work and so I’ve blended the dogs, the woods, and the habitat to work with what I’m doing. In the afternoon, if the weather’s good, I run the dogs again. I’m in the woods every day. 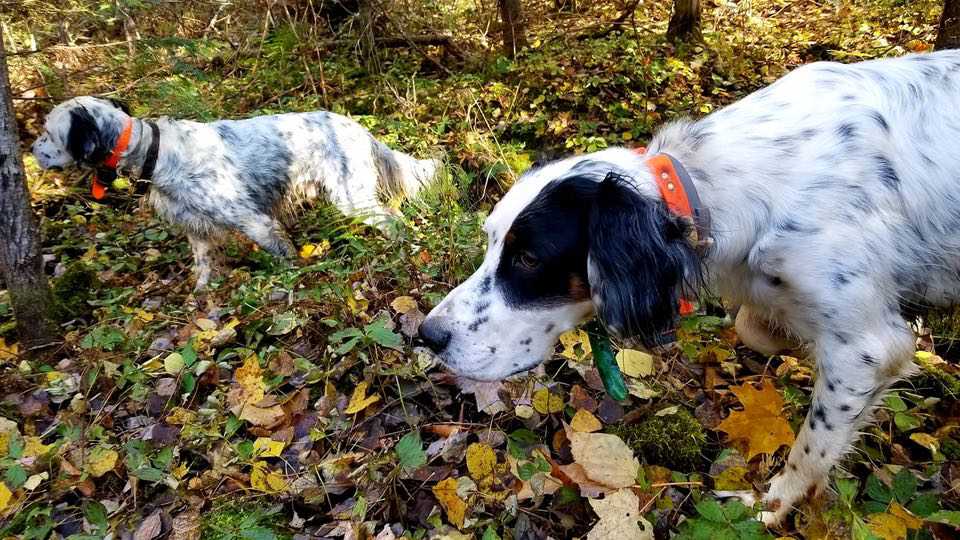 I’ve been fortunate to have a lot of great customers. I don’t guide much anymore. I was pushing it hard because I don’t personally like to guide past November 15. I feel there should be a rule that says you don’t run your dogs during deer seasons. Those hunters need their season, too. I got to the point where you couldn’t even get in and I couldn’t take on new clients. Now I’m sort of cutting back on clients and when I get asked to do seminars on how to understand the woods better for grouse and woodcock hunting, I’ll choose to do that. 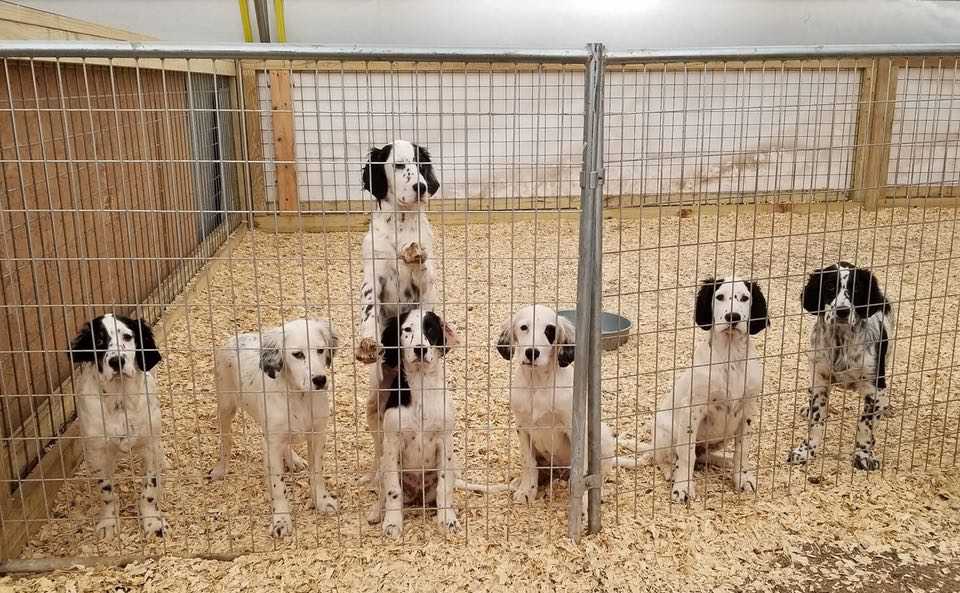 The next generation of upland bird dogs. (Ann Jandernoa photo)

Seeing the habitat and understanding where to find grouse in the woods is key.

You have to analyze the floor, you’ve got to look at the cover, you look at the canopy cover. Grouse are so hábitat-specific, but it’s also relating it to the weather and the winds in the area. Look at the boughs on the trees, do they go all the way to the ground? Could a grouse stay dry under there? It’s part of your job as a guide to teach your client to read the woods. It’s tough, but it’s rewarding at the same point. I’ve met a lot of nice people. I can only think of 2 people I hope to never meet again! You see that smile and the admiration for the dogs. You have to be a teacher, you won’t always be there. It’s about sharing your knowledge and building that passion in someone else. Hopefully … they will pass it on to someone else.

Most of my clients choose a 20-gauge. Some prefer break action, some prefer semi-automatic.

Buy one that you’re comfortable with. Make sure it’s light enough to carry for hours. Make sure you can swing it in the thick cover and your barrel is not too long.

Find out more about dogs and training at Northwind Enterprises