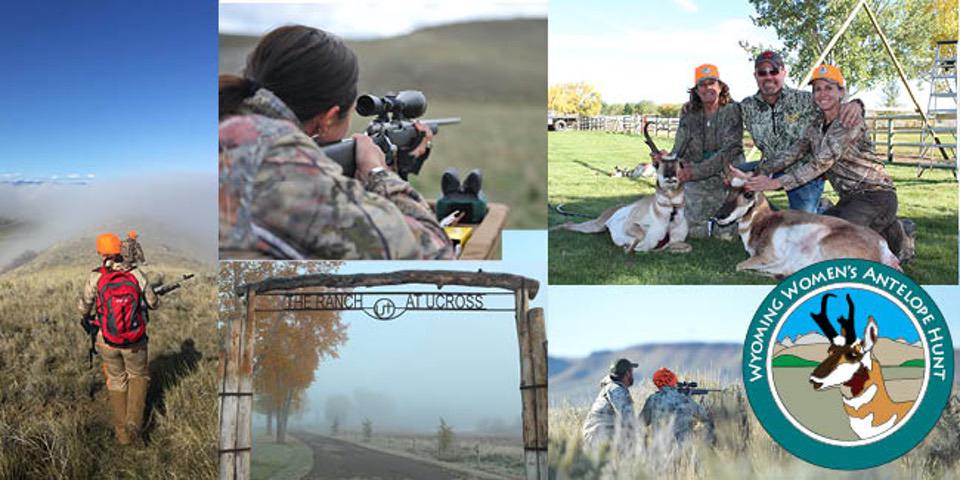 The hunt was held Oct. 11-14, 2018 at the Ranch at Ucross in northeastern Wyoming. In 2013, the Wyoming Women’s Foundation created the hunt to promote camaraderie and mentorship through hunting. The event’s dinner and auction, which this year had a sold-out crowd of 300, also raises funds for grants and special projects that help Wyoming’s women and girls achieve economic self-sufficiency. This year’s hunt resulted in 35 of 36 hunters harvesting antelope. Next year’s event is slated for Oct. 10-13, 2019. 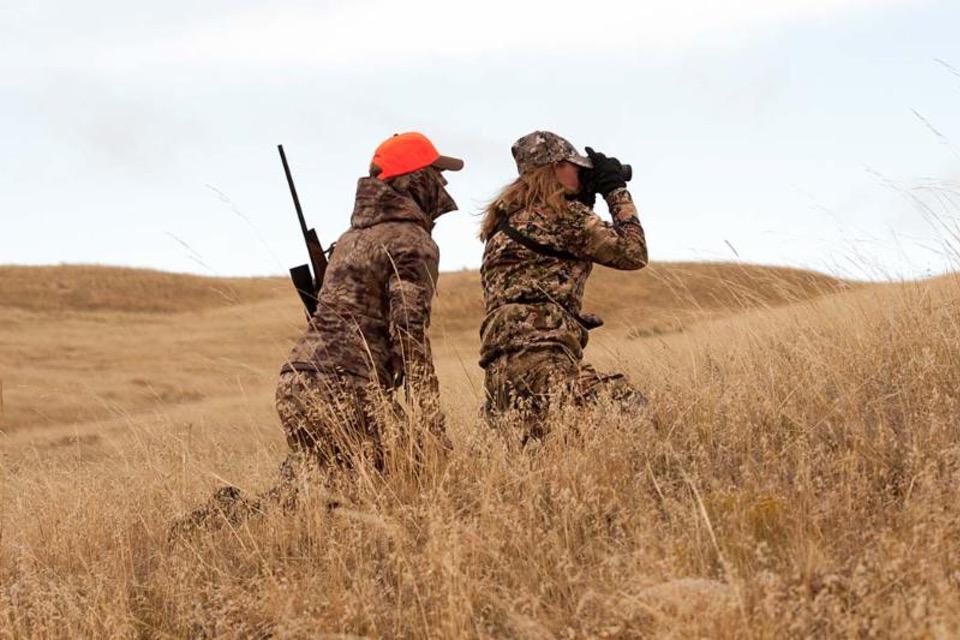 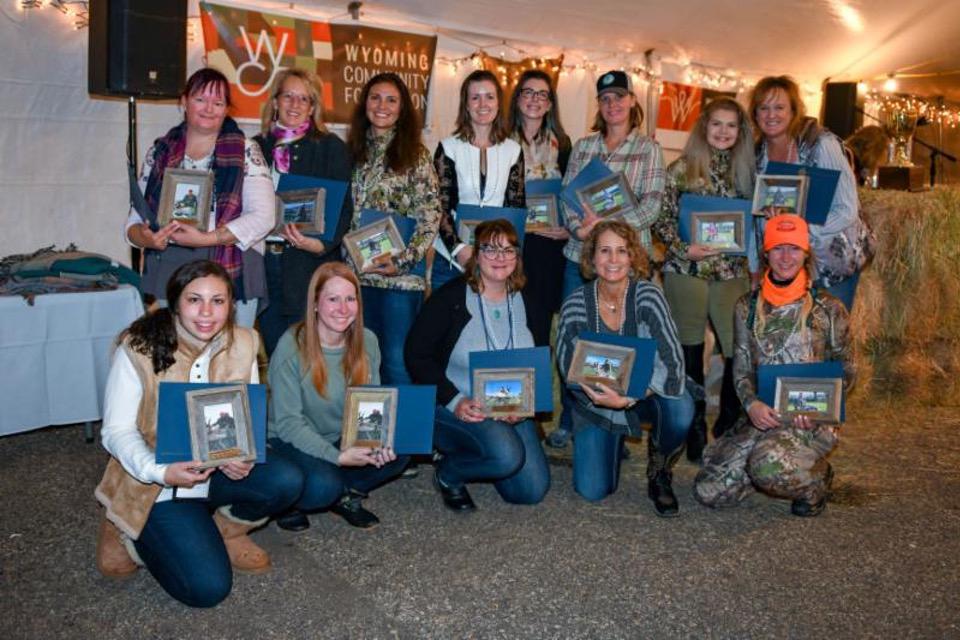 ROMAN GODDESS OF THE HUNT AWARD
The Roman Goddess of the Hunt Award was presented to first-time big game hunters who harvested an antelope. Roman Goddess Award winners:
Kathleen Brock – Laramie
Brenda Elliott – Cheyenne
Affie Ellis – Cheyenne
Rachael Esh – Sheridan
Tiffany Gamble – Casper
Anastasia Hannebrink – Willoughby, OH
Casey Jackson – Edgewater, Md
Mary Lee – Laramie
Melissa McGarvin-O’Melia – Centennial, CO
Dempsey Rogina – Cheyenne
Holly Roush – Gillette
Karen Seto – New Haven, CT
Jodi Stemler – Littleton, CO
Donna Worthy – Edgewater, Md
FOUNDERS’ CUP AWARDThe Founders’ Cup Award goes to a corporate sponsor team with the closest average shot distance; all team members must harvest. It is named for the hunt founders, Marilyn Kite, Donna Wichers and Lynne Boomgaarden, and was presented presented by Marilyn Kite, who hunted at the event this year.
The winner of the 2018 Founders’ Cup was Sinclair Oil with an average shot distance of 88.5 yards. The team’s hunters were:
Cindy Pulkrabek – Ogden, UT
Stephene Taylor – Rawlins
SUPER STALKER AWARDThe Super Stalker Award goes to the individual closest to her antelope when making the kill shot. The 2018 Super Stalker was:
Donna Worthy (Edgewater, Md) with a distance is of 41 yards and her guide, Mike Ellenwood (Banner).
ROOSEVELT AWARDThe hunt’s Roosevelt Award is named after Theodore Roosevelt, U.S. president, conservation champion and co-founder of the Boone & Crockett Club. This award celebrates the type of personal character Teddy Roosevelt held in highest regard – an adventurous spirit, determination, self-reliance, and the need to give back more than what is taken – all of which he believed defined what was inside every true sportsman and sportswoman. Voted on by the guides, this award is given to the participant that had the fortitude to keep trying and hung tough, win lose or draw. Roosevelt Award winner:
Lindsay Wion – Cody 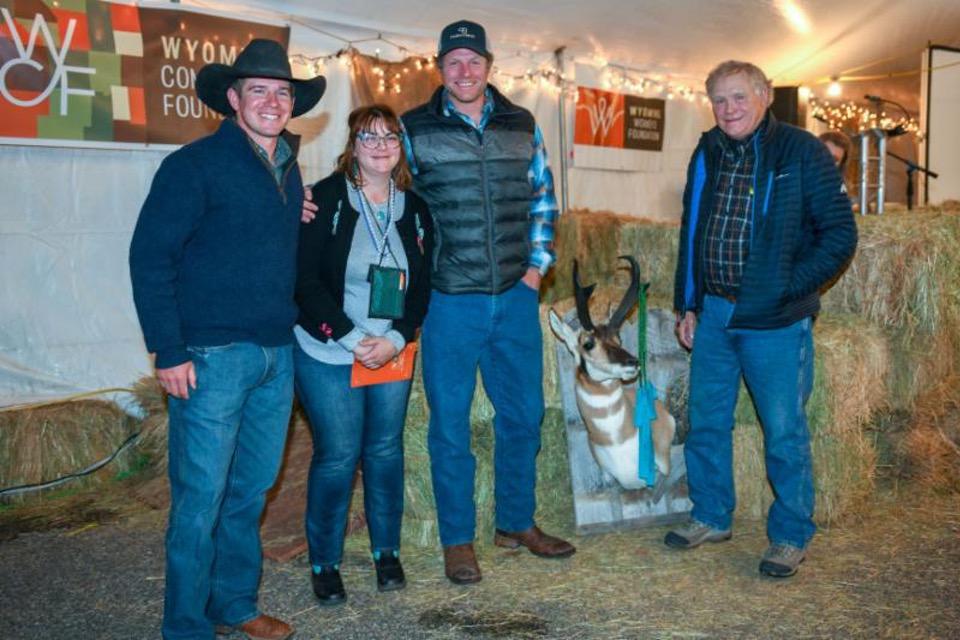 SHELLEY SIMONTON HUNTER
Shelley Simonton was a board member of the Wyoming Women’s Foundation and a co-chair of the hunt committee since the start of the hunt in 2013. In 2017, she passed away after a battle with cancer. Before she did, she started a fund to help bring more single moms to the antelope hunt. This year’s Shelley Simonton Hunter was Mary Lee of Laramie.
“CAN’TELOPE” AWARD
This award goes to the hunter with the best sense of humor, and who also did not harvest an antelope. It was developed organically by a hunter several years ago who did not harvest an antelope–not as part of the original awards structure. The hunter who inspired the award was Danise Edmunds. After two long days of hunting without harvesting, Danise asked her guide to stop at the grocery store on the way back to the ranch. She bought a cantaloupe and created a “can’telope” bust using sage brush for horns. Her sense of humor was endless and she focused on having a great time.
The recipient of the 2018 Can’telope award is Jennie Gordon (Buffalo) and her guide was Jerry Longabardi (Cody). 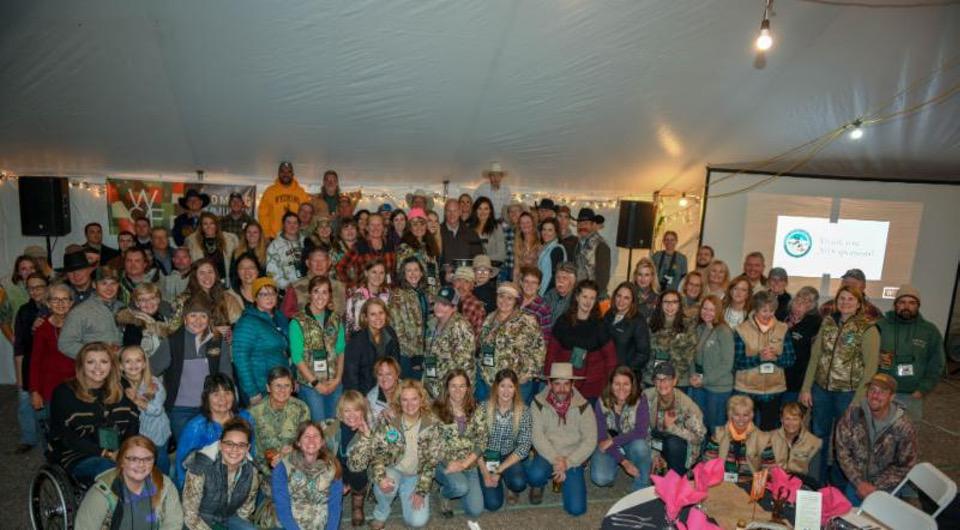 Attendees of the 2018 hunt with Governor and First Lady Mead. (Stephen Girt photo)

About the Wyoming Women’s Foundation

The Wyoming Women’s Foundation is a priority fund of the Wyoming Community Foundation, which has granted out over $60 million to nonprofits across the state since 1989. The Women’s Foundation builds on a permanent endowment that will ensure funding to enhance the lives of women and girls in Wyoming for generations to come. It makes grants to organizations that help Wyoming women and girls attain economic self-sufficiency, creates statewide awareness of the barriers to economic self-sufficiency, and supports systems change to eliminate those barriers. Since its inception in 1999, the Women’s Foundation has invested more than $880,000 into almost 100 organizations. Learn more at www.wywf.org.

Find out more about the Wyoming Women’s Antelope Hunt here.