Wildlife biologist Melynda Hickman with the Oklahoma Department of Wildlife Conservation was named 2018 Wildlife Biologist of the Year by the Southeastern Association of Fish and Wildlife Agencies (SEAFWA) during the organization’s annual meeting in Mobile, Ala., last week.

Oklahoma’s Wildlife Department Director J.D. Strong said there is no one more deserving of this honor. “Melynda is a tireless worker, a tremendous ambassador for the ODWC and well respected among her peers and the public we serve,” Strong said. “In a profession that’s often focused on the hook-and-bullet crowd, Melynda has a unique ability to energize folks about bats, bluebirds, butterflies and the importance of conserving ecosystems as a whole.” 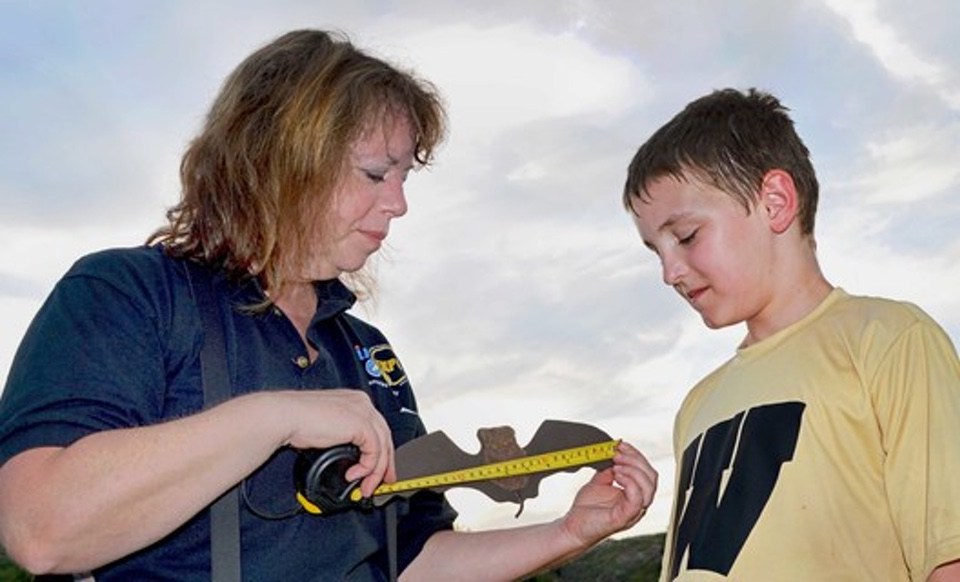 Wildlife Diversity Biologist Melynda Hickman educates a youngster about the Mexican free-tailed bat while hosting a Selman Bat Watch event. Hickman was named 2018 Biologist of the Year by the Southeastern Association of Fish and Wildlife Agencies. ((Blake Podhajsky/ODWC photo)

SEAFWA President Chuck Sykes said Hickman was selected by her peers for her “clear dedication to promoting and conserving Oklahoma’s natural resources. Her engagement in public education events and programs establish connections with future generations that all of our state agencies and the wildlife we manage depend upon.”

Hickman is the Department’s Watchable Wildlife Program leader. She has started and continues to lead several important conservation education efforts. One of those, now it its 23rd year, is the Selman Bat Cave Wildlife Management Area bat watch program, which has enabled more than 10,000 people the unique opportunity to experience the nightly emergence of a million Mexican free-tailed bats.

Hickman was a driving force in developing a state-of-the-art multipurpose educational facility at Hackberry Flat Wildlife Management Area in southwestern Oklahoma. The center and its programs have given countless students the opportunity to immerse themselves in wetland education. She organizes seasonal events hosted by the Hackberry Flat Center, including a monarch butterfly watch and tagging program; shorebird, raptor and grassland bird-viewing events; and an annual Hackberry Flat Day.

Hickman earned a bachelor’s degree in biology from Appalachian State University. She was an educator in Norman schools and worked with the Oklahoma Museum of Natural History before beginning her Wildlife Department career.

Each year, SEAFWA presents Biologist of the Year Awards to two career biologists of state wildlife agencies, one each in wildlife and fisheries, who in the opinion of the SEAFWA Awards Committee have made outstanding contributions to fish and wildlife conservation.

Oklahoma’s Wildlife Department is among the fish and wildlife agencies of 15 southeastern states and two U.S. territories that make up SEAFWA’s membership.