My love of the over/under shotgun began with a split-second decision I made while acting as master of ceremonies for a live auction and fundraising banquet. The bidding was about to close on one of the most beautiful guns I’d ever seen: a Beretta white onyx 28-gauge over/under shotgun with a 28-inch barrel, choke tubes and gold inlay engraving.

As the auctioneer placed the gun back in its custom Giugiaro case, I cleared my throat into the microphone, raising the bid. I’d never spent so much on a gun. But up to that point, I’d never seen one so beautiful. Choosing a shotgun is as much a matter of personal preference as anything, but there are practical reasons as well. Here are 7 reasons to choose an over/under shotgun for the field.

When John Browning designed the Browning Superposed shotgun, the first true over/under, it was with the thought that it was the last gun the government would take from the citizenry. In the history of firearms, the over/under shotgun stands alone, in that its design was not for military or law enforcement purposes—it was conceived purely for the wingshooter. One question I get asked in the field, especially in waterfowling, is, “Don’t you wish you had another shot?” For me, a double on game birds is as good as it gets. An over/under provides me with the two shots required without a “throwaway” shot. In the fast-flush-and-flight world of wingshooting, if I had a third shot, it would likely be a Hail Mary. The perfect double is also possible with a side-by-side, but I’ve never managed it.

With 2 barrels, an over/under (or any double gun) provides the option to shoot 2 different patterns instead of just the 1 available for single barrels. This option works as well in clay events as it does in the field, since the second shot is usually at a bird farther away than the first. For upland hunting, the choke in my bottom barrel is improved cylinder, and my top barrel is modified. For waterfowling, my bottom barrel is modified, and the top is full choke. Using two different chokes gives me the most effective pattern at the range I will likely be shooting. It also lets me use different loads depending on the conditions.

My 20-gauge over/under lie completely submerged on the duck flats this year; it didn’t miss a shot afterward. Potential reliability issues present in single-barrel repeaters simply do not exist in over/under shotguns. They don’t have the problems associated with ejection ports, shell carriers or magazines. There are just fewer little parts in an over/under. There are no gas pistons, forearm nuts or stock springs. The maintenance can be as simple as wiping it off and dabbing on some oil. I don’t want to be 6 miles into the mountains on a ptarmigan hunt with a gun problem.

While the feel and handling of a gun can be subjective, there’s no arguing that a break-open gun is shorter than a repeater with the same length barrel. The difference is that an over/under doesn’t have a lengthy feeding mechanism. The handling advantage of a shorter gun of the same weight is that it swings faster. Since the shells are in the chamber and between the hands, the balance point of the gun is not shifted forward. 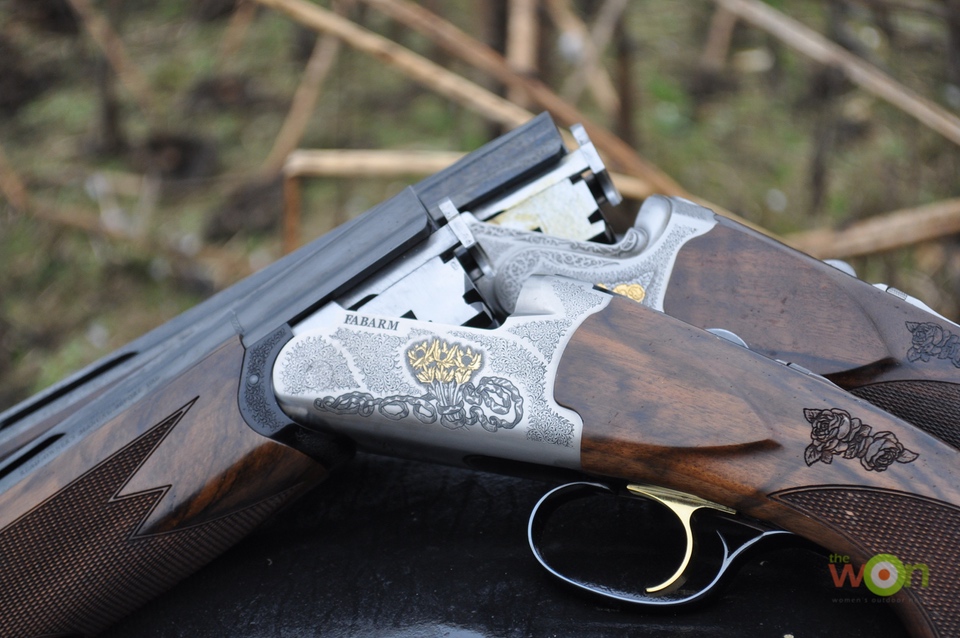 The simplicity of a break-open action in determining whether the gun is safe and unable to fire makes a hunt with other shooters more enjoyable. Since safety is everyone’s responsibility, being able to ascertain the safety of other shooters visually from a distance is one less thing to worry about afield. In a magazine tube, shells are hidden from view; with an over/under, if the gun is open, it is safe.

A gun is most certainly a tool, but it is also a work of art, in that it evokes the passion of wingshooting. Beauty is naturally subjective, but there are certain traits—smoothness, fine lines and the variety in wood grain—that inarguably belong to the classic double gun. The practicality of aesthetics is simply in the added joy it brings to the field. Certainly, for me, the image of a chocolate Labrador on retrieve or an English setter on point is as much a part of the hunt as the bird in hand.