Gallatin, Tn. – The Lady Bass Anglers Association’s (LBAA) first full regular season ends August 25-26-27 at Tennessee’s Old Hickory Lake and it has been quite an inaugural year for the LBAA, and it isn’t over yet either!

Going into the last regular season tournament Angler of the Year (AOY) races are up for grabs on both the pro and the co-angler sides of the LBAA.

Old Hickory should be a hotly contested tournament with multiple patterns being prevalent at tournament time.  “One thing about Old Hickory is whatever your strength is you can find it,” commented veteran angler Emily Shaffer. “The fish will be caught shallow and deep. Old Hickory has brush, grass, rock, boat docks, ledges, riprap, you name it and you can find it. That to me is what makes it such a great   fishery.” 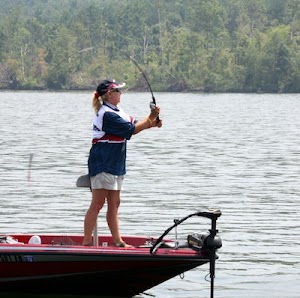 Shaffer, winner of the 1995 Bass`n Gal Classic and Mt. Juliet, Tennessee resident shared her thoughts about why she thought Old Hickory would be a hotly contested tournament.  “Everyone is looking to catch fish, and place well so they can make it to the first LBAA Lady Bass Classic.”

“I know the LBAA will finish the first year with a bang! I am excited seeing all the new faces   getting involved with all of the veteran anglers. We are proving we are a tour to be reckoned with,” Shaffer went on to say.

Tournament dates and times for the 2011 LBAA Old Hickory event are as follows.  The ProAm Tournament will be Thursday, August 24 and Friday, the 25th.  Anglers in the pro division may bring five legal bass and the co-anglers three legal fish to the scales per day during this tournament.  Entrants into the Old Hickory ProAm event must be LBAA members.

On Saturday, August 26th, the LBAA will host the 2011 LBAA Old Hickory Homesafe Charity Tournament.  The proceeds from this charity team tournament will go towards helping Homesafe assist more women and children who find themselves in difficult situations.  Entry fee is $100 per team and the tournament will pay out a guaranteed $1,000 first place cash prize.  There will be an additional $200 cash prize going to the highest finishing team with a  female team member and an additional $200 cash prize that will to the highest finishing team with a child age 12 or under as a team member.  At the conclusion of Saturday’s weigh-in, there will also be a raffle of items donated by national and local organizations.  The proceeds of this raffle will add more support to the Homesafe organization.  Visit them on the World Wide Web at http://homesafetn.org/services/sumner-county