Todd White, Bowfishing Association of Illinois Southern Director, and Official Sponsor of Slew Rat Bowfishing Team, knows that women are rapidly entering the world of bowfishing. In an effort to help encourage new women bowfishers, and to recognize the current “Dancing Arrow Divas” of the bowfishing world, he added a Ladies Division to the BAI/Muzzy Fluorspar  Shoot held at Rosicalre, Ill., on August 20. 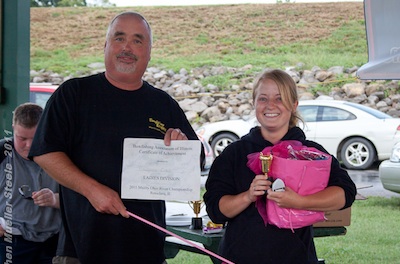 Cassie is with Todd White BAI Southern Director and her pink bag of goodies from Team WON. Photo by Gretchen Steele.

TeamWON, with its own Elite Carp Tactical Team of bowfishers, was happy to help out this new division.

Along with the help of some of the fine TeamWON Carp Caper sponsors such as Spairz, Cajun Archery, Buck Gardner Game Calls Pro Staffer Jason Schlesinger and Steele Photo Services, TeamWON donated a special bag of goodies for the first place winner of the ladies division.

Tiny, but tenacious and tough Cassandra Ertel took the first place spot in this inaugural division.  Each lady in the division pulled her two biggest fish for the contest, based on the total weight of the biggest two fish shot during the 12-hour (from 7 a.m. till 7 p.m.) shoot on the Ohio River.  Ertel’s winning total weight on two fish was 57.30 pounds. 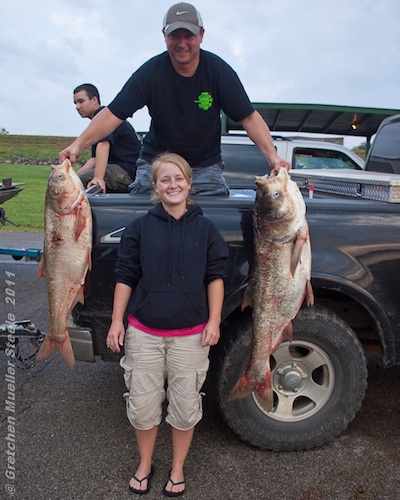