A child’s bike ride without training wheels, trip to the dentist and ride on the school bus are all memorable first moments for a mother. Nothing is as special to an outdoor enthusiast mother, like me, as the first time seeing her son shoot a bow successfully for his first time. Another milestone has passed for my five-year-old son, Maddex. It has been a summer full of accomplishments for him. 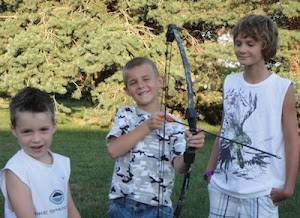 The author's son, Maddex Monroe, along with Matthew and Sean Loughney. Photo by Kristen Monroe

Last year the Easter Bunny brought him a toy long bow in his basket. The Easter Bunny had brought him a bunk bow and the arrows would slip off the rest and the arrow was impossible to nock. Needless to say, he was frustrated and never picked it up again. I was a bit skeptical to try another children’s bow until I pulled the Lil’ Banshee Compound Bow out of the box and got a good feel and look at it. It was Realtree Camo and came in a “ready to shoot” condition. The Lil’ Banshee compound bow features a new ambidextrous, steel reinforced, soft touch grip and tough fiberglass limbs. The Lil’ Banshee set also came with a multi-color target, 2 fiberglass target arrows, arm guard, finger tab and adjustable sight.  The best part, this quality bow and starter kit retails for only $30.

Maddex took one look at his new bow and suddenly lost his desire to finish dinner. “Can we shoot it, Mom?” Opening the box before we were all through with dinner was a mistake, silly me. I think I was just as excited to see it as he was, if not more. I took him in the back yard and grabbed my target from under the deck. His eyes got big when he saw he got to use the same target Mom and Dad use. I explained the basics in the most simplistic way I could. I was trying my best to make it unintimidating, simple and fun. I was also taking into consideration it was the end of the day. Most parents know what it’s like for a young child in the evening; usually a little tired and irritable. I was certain not to make the mistake of pressuring him to practice too long. 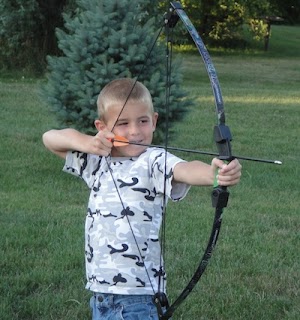 During our first experience with Lil’ Banshee, I taught him how to hold the bow and about feet positioning. I made the safety rules very clear to him. Then the fun part; I let him pull it back and sling an arrow into the target. I was impressed with the speed of the arrow and so was Maddex. He was excited to see the Lil’ Banshee had power and it wasn’t just a stupid toy. It was a real compound bow with a little punch of power. At first, it was a little tricky for him to get the arrow to sit on the rest and balance. He eventually got the hang of it; after all, he is only five. I especially liked that the string and nock worked very well together. The last thing you need for a beginner is a faulty nock that doesn’t hang onto the string.

The next day Maddex was excited to show his new bow to the older neighbor kids; his friend, Matthew, who is seven years old, and Dillon, who is six. The older kids were equally as impressed. It is apparent Barnett knows the younger generation is our future and they want to start them off right.