Rhonda Calhoun: Reloading is not an option

For the past couple of years I have been intrigued with the idea of going to Africa to shoot big game with my bow – something most women have not accomplished. Yes, women hunt big game in Africa, but most often with a rifle.

After a year of planning, I was going on my African safari. Safari – the magical word that brings to mind high adventure in the wild. This was a five-day hunt that included three animals. A gemsbok, blesbok and of course, the Cape buffalo, which was my dream hunt.

After landing in Johannesburg, we were taken to a beautiful lodge in Phalaborwa that borders the Kruger National Forest in the Limpopo Province. That evening I met with Ernest Vandenberg who owns Kgokong Outfitters. We ate a fantastic meal, sat around the fire and chatted about how tomorrow’s hunt would begin. We then settled in for a good night’s rest.

We awoke to a beautiful morning sunrise and the hunt began. I was full of anticipation and excitement not knowing what to expect. My first animal to hunt was a Cape buffalo. We headed out on foot looking for tracks. After walking what seemed to be an eternity, the tracker came upon some good tracks that led us to a heard of Cape. The time had come to sneak up on them. We had to be extremely quiet and the wind had to be right.

We hid behind any tree or bush we could get next to. Slowly, silently each step was exciting. We were getting closer and they still did not know we were there. Cape are a dangerous animal and you never know what they will do if they see or smell you. After carefully stalking close enough to make the shot, we had to wait for a Cape to turn broadside. It seemed like forever before that happened, but in time she turned. This was it!

All I could think about was placing my arrow in the right spot and hoping that all the preparation would pay off. The arrow had to be strong enough to penetrate and hit vitals. Reloading was not an option. I was shaking so hard … I ranged my Cape at 40 yards, knocked my arrow, drew my 70-pound Mathews MR6 with everything I had. Found the spot – my Carbon Express 705 grain Piledriver Hunter 350 was at full draw now.

Time for delivery, I let the arrow fly! It seemed like everything went in slow motion after that. Smack. A good hit! My knees gave way. I was still shaking. “All we do now is wait,” said my PH. At one point, we thought she was going to drop. They are a tough animal to take down. We watched her run and needed to stay on her. We found blood and kept on the trail. As time went by it seemed like forever before we finally came upon her.

She was down but still alive. She was growling at us as if she was going to get up and charge. My heart was beating out of my chest! It was then that my PH put a bullet in her. He told me that she would have expired from the hit of the arrow but he wasn’t sure how long it would have taken. After a sigh of relief it was then that I realized what I had done. I was hysterical with excitement. What an accomplishment from a 55-year-old woman that had only started shooting a bow at the age of 42. As far as I know, I am the fourth woman to accomplish this and am privileged to be in the company of the other three. A special thanks to my husband, Mark, who had the knowledge to put together the equipment needs for this hunt. 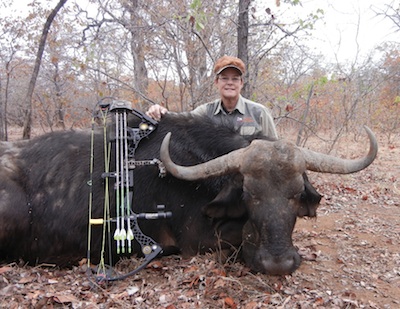 I was able to harvest my other two animals as well. The gemsbok was a 40-yard shot and we watched him drop. The blesbok was a 50-yard shot and recovered him with no problem. Three animals in five days. 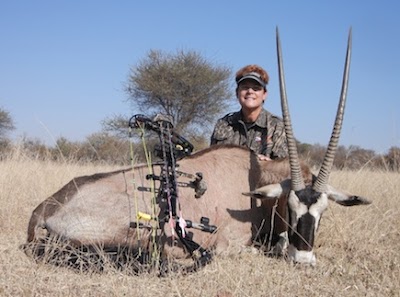 If you ever have the urge hunt Africa, go. You won’t regret it. As well if you go, know that through your hunt, you have helped the villagers by providing food, clothing and some necessary essentials. 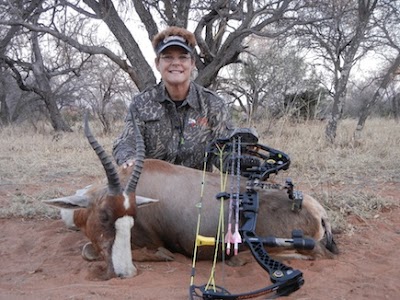 Rhonda Calhoun is on the Pro-Staff of the TV show Huntin’ with the Judge. She has lived in Texas for the past 23 years. Rhonda is an enthusiastic mother and grandmother willing to give it her all. Her hobbies include motorcycling, camping, softball, bowling water and snow skiing and even arm wrestling – having a World Championship under her belt!

Rhonda was introduced to archery by her husband, Mark, in 1998 at the age of 42. She managed to win her first title that same year and was hooked. Rhonda began hunting in 2000 and harvested her first animal, a Texas Dahl ram that year. She has been on the Mathews Pro Staff since 2004 and continues to travel across the US competing and hunting. She is an active promoter of the NASP (National Archery In The Schools Program) and coordinated the first middle school NASP tournament in Brownwood, TX. She takes pride in helping our youth become active in this sport and is a level-2 certified archery instructor. Rhonda is proof that you are never too young to learn something new.