Shoot to Thrill: It’s cold outside? Bill Konway says, ‘So what?’

Outdoor Photographer Bill Konway took this photograph in Indiana. ArcticShield purchased it for promotional use. He writes,

It was shot with a Nikon D2XS with a 400mm f2.8 lens. Because of the long focal length, and shallow depth of field, the 400 really makes the picture pop. Because I was able to be farther away from the subject, more snow got in between the lens and the model, making it look practically like a blizzard — when, in fact, it was just an average snowfall. Another benefit of using a long lens for this shot is that again, because of the compression of the lens, it pulled the background up around the subject, but also left it out of focus, thus not distracting from the subject.

On a side note, the model (when dressed and ready to go) had several minutes to get some of the falling snow on him and his gear. I thinks it adds a bit more realism to the shot. Had the model just stepped out from indoors, the clothing would have been warm still and the snow would have melted on it.

[Editor’s note: Bill said at the time he took the photo, he didn’t have a buyer for it, so he added this quote.] Maybe that makes another point. Just get out and shoot even if you do not have a particular need or job. 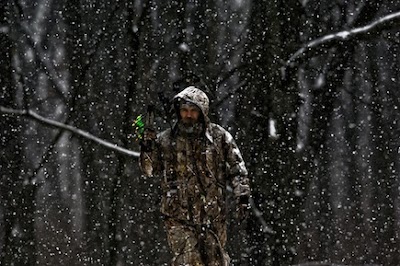