Our Huntin’ Hut started out as a trailer that had been shunned to the fencerow several years back.  After unloading all the miscellaneous scrap that had accumulated and cutting the sapling that was growing through the wheel, I was able to drag the trailer from the brush.  Granted it looked pretty rough, but I had a vision and a plan.  With the help of Matt, my brother, and Brandon, my nephew, we were going to turn this into a mobile hunting hut.

I pretty much stripped the old trailer down and started with the four-foot, three-inch by eight-foot frame.  The existing axle and wheel bearings were unrecognizable; therefore, we couldn’t put new bearings in it.  So, we built a new axle with new hubs and wheels.  I even found some good used tires at a local tire shop, to ease the cost.  After painting the frame with black bed liner paint the old trailer was starting to look pretty good.

We added trailer jacks to the tongue and back corners for stabilization.

Well, the trailer work was done and ready for the carpentry work.  First we framed up the floor with 2x4s and I bolted this inside the angle iron uprights that were part of the trailer frame.  Then topped it with 3/8″ OSB plywood.

The walls were framed with 2x2s.  I was trying to save a little money but, the twisted and warped 2x2s weren’t worth what I saved.  If we build another one we will spend a little extra on 2x4s.

On the front wall, we built it six feet, six inches high and the back wall is six feet, four inches high.  The front, back and end wall have openings for 3’x2′ sliding windows.

On all the windows both panes slide and they can also be removed from the track very easily, if needed.

After, installing the windows, we covered the outside with 3/8″ OSB plywood.  We used 5/8″ plywood for the roof decking and topped that with painted metal low-rib panels.  Then we moved to the interior and used 1″ styrofoam insulation boards cut to fit between the studs.

We covered the insulated interior walls with 1/4″ luan/utility plywood panels.  While we didn’t have to deal with a county inspector, we did have the watchful eye of Brandon overseeing us. At this point we framed up the door, hung the 2’x2′ window, insulated and covered the outside and inside of it.  We hung the door and then the hut was ready for paint.

Essentially, the hut was finished, but we added a few finishing touches to the interior.  A collapsible shooting rest/shelf at the front window.  A couple shelves in the corners and even some Mossy Oak curtains!

We finished up the Huntin’ Hut the week before the Missouri youth turkey season this last spring; just in time to move it to the edge of a tree line overlooking a clover plot.

We positioned the hut against the timber and brushed it in with some cedar limbs.  Brandon, Matt and I were ready to put it to use. On opening morning of the Missouri youth turkey hunt, Brandon got his first turkey.  We started a tradition that day in the Huntin’ Hut.  He was the first one to put his initials, date and what he harvested from the hut on the wall.  And, I’m sure it won’t be the last time he does. 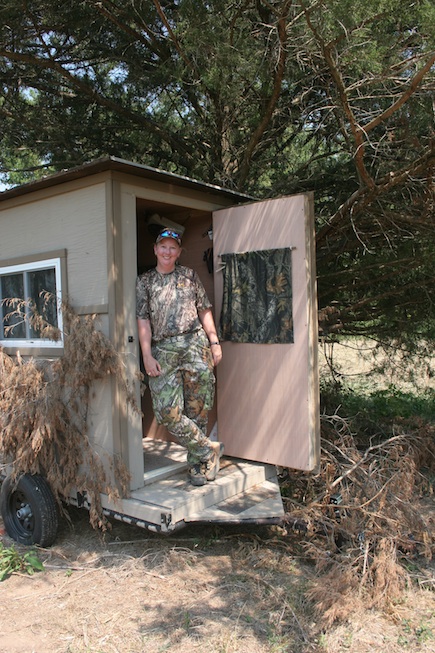 Marti Davis at her home away from home. Photo by Barbara Baird.