DamselFly Fisher: The Cast and Blast

We need to take time to celebrate the beauty of Cast and Blast.

I always revel in ways to combine doing multiple things I enjoy doing at the same time like:

But I think the ultimate of these great combinations is Cast and Blast, which is waterfowl hunting and fishing (in my case, fly fishing) at the same time. Unfortunately, hunting with my goshawk, Hades, is not especially compatible with fly fishing because he won’t sit where I place him like a rod or a shotgun will. My new love of shotguns, however, is perfectly compatible with fly fishing. I am relatively new to gun hunting and very new to hunting ducks with shotguns, but I am quickly becoming hopelessly addicted to this exciting and dynamic sport.

Site of the Cast and Blast: Tomichi Creek. Photo by Katherine Grand.

Last month I had the pleasure of heading out with good friends, Josh and Robby, to fly fish for spawning brown trout and jump shoot ducks on Tomichi Creek. As we were walking from the parking lot we saw three friends coming from Tomichi Creek, each with a Canada goose. Geese are rarely taken on the Tomichi and I got pretty excited seeing them. Just in case we saw some, I switched to goose shot in my shotgun so I could knock one down.

The Tomichi is a small creek so we hopscotched our way upstream, hucking streamers in all the fishy spots we could find, and continuing up the creek. Unfortunately my friend Josh’s boxer Bishop likes to tag along with anyone who is moving and busted a couple of ducks way too far out for me to shoot. Also, we arrived after our friends had worked that whole stretch for birds. 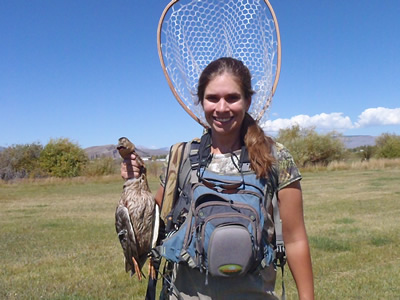 I was beginning to regret lugging a big Benelli 12-gauge, a full pack and the only landing net I could find in time, our huge Brodin boat net. I felt weighed down and was becoming less and less optimistic about getting a shot at some ducks. The browns, however, were aggressively chasing streamers and I was regularly catching fish. It was a beautiful day. The sun was shining, the scenery was gorgeous, and the fish were biting. On our way back to the truck after an excellent day of fishing we bumped a hen mallard, but again too far out. Josh, who hadn’t brought his gun, told us she was circling back over us. Robby shot and missed. I shot once…twice…then hit her on the third shot when she was around 120 yards away. I loved seeing the stunned looks on Robby’s and Josh’s faces. They had never seen someone take that far a shot on a bird and hit it, not even my husband (who is an excellent duck hunter). I am glad I had some goose shot loaded because I don’t think I would have gotten her otherwise. Although I was the least experienced waterfowl hunter among our group, I was able to shoot a duck. I also caught several fish that day. I stopped regretting taking the Benelli after shooting that hen.

I am hopelessly enamored with the fast-paced and exciting world of waterfowl hunting. I love the many opportunities you get to shoot ducks during a good day of hunting and I love the fact that ducks also enjoy many of my favorite fly-fishing streams. Cast and Blast is where it’s at!

Tight lines and thanks for reading!