Two weekends, 19 women hunters, bows, guns, and fishing rods – a surefire recipe for FUN!! I recently hosted two Ladies in Camo whitetail bowhunts at Mountain View Plantation in Delta, Ala., where women from all over the nation attended: Texas, Louisiana, Oklahoma, Indiana, Missouri, Pennsylvania, Georgia, Tennessee and Alabama. This event was not only a whitetail bowhunt, it also included a Women’s Ultimate Outdoor Challenge hosted by the outfitter. 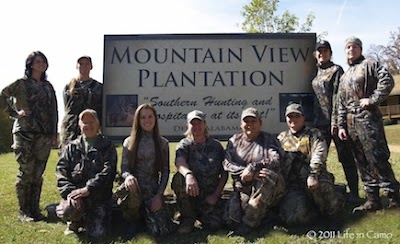 The Women’s Ultimate Outdoor Challenge was a competition that included 3-D archery, rimfire shooting, 5-stand shooting and bait casting. Points were accumulated for each individual skill, added together and a highpoint winner for each weekend was awarded. Between the two weekends, the points were carried over and each skill had a highpoint winner with an overall grand prizewinner that accumulated the highest number of points. There was also the prestigious “DAL” award (Dead A$# Last award), given for both weekends. The overall winner was the recipient of a three-day rut hunt in January with Mountain View Plantation. 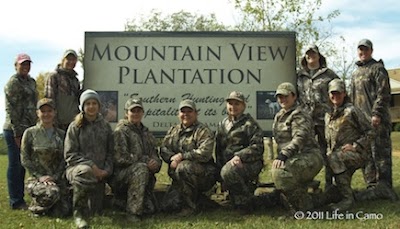 Trophies and awards were awarded to the winners from some really great companies that cater to women in the sport of hunting. The companies that were a vital part of this hunt and event were HerCamo Shop, Buckmasters, Sugar Mountain Clothing Company/Turner Taxidermy, Never Quit (NQ) by THY, Bohning Archery, Silly Girlz, Pink Vixen Camo, Blitzkrieg Game Calls and Lures, Girls with Guns, and Strut & Rut. Mountain View Plantation sponsored the trophies and the grand prize hunt. McKenzie Targets and Delta Targets made it possible for an outstanding 3-D archery range. 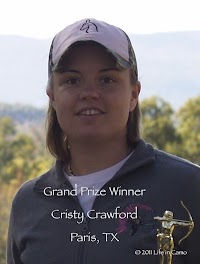 The overall grand prize winner of the 3-day rut hunt in January with MVP was Cristy Crawford of Paris, Texas. Photo Credit: Life in Camo

Bohning Archery hosted an arrow fletching clinic that some of the ladies participated in; learning how to fletch their own arrows. We fletched several arrows while in the clinic. We shared a few laughs while creating some custom vane and wrap designs – the sky truly is the limit with the quality products and vanes by Bohning Archery.

It seems that women’s hunts always start out the same; very few know each other when they arrive so there is a brief adjustment period. As the first evening progresses many of ladies are chatting away sharing hunting stories and tidbits about family and careers. Before you know it, you would think all of the ladies had been acquainted prior to the hunt. I always laugh when I tell the outfitters, “When the makeup comes off, at that point, you know we are all somehow connected.”

These two weekends were no different. We had such a great time and although I was not a participant in the competition, I was able to share the excitement with each woman as they competed; some trying a new skill for the first time. 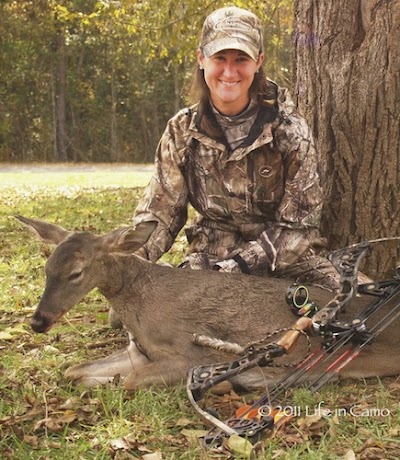 Kat Couturier and her nice mature doe harvest from the second hunt at MVP. Photo Credit: Life in Camo

With two more successful hunts behind me, I am always grateful for the opportunity to share the outdoors with old and new friends enjoying the sport of hunting, buildi good friendships and make great memories. I am excited to see what 2012 has in store for the Ladies in Camo with various hunt offerings allowing women to not only grow as hunters, but also to enrich each of our lives.

Be sure to subscribe to the Guru Huntress’ blog at www.njadams1.wordpress.com to be the first to know about these exciting hunts as they are posted. You can read stories and see photos from past hunts she has hosted, as well as guest posts from those that have participated in various hunts.