Millisecond Molly: Giving Back to Our Veterans

I was 12 and on my way home from the Gun Bloggers Rendezvous (GBR) in Reno. During that car ride I had plenty of time to think. I was thinking about the past weekend, learning new blogging techniques, about different firearms, new friends and lessons I would take with me from then on. That weekend I realized how much I appreciate our soldiers and veterans. I realized what I didn’t see before, I realized how much veterans and their families sacrifice, and how little of their sacrifice is understood and honored. Every Veteran’s Day, always the same thing: a parade, flags and a day off school but really…how do children who have never experienced such sacrifice comprehend the magnitude unless it touches home? For me, at the GBR it touched home. Veterans’ Day has never meant the same again; the parades, flags and day off have a true and special meaning. It is a day of honoring our veterans. I honor the day and all the men and women who have served our country. 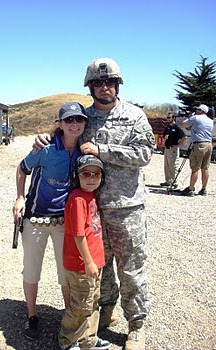 That year was my first trip ever to the GBR. As I entered the meeting room there was clicking of laptop keyboards, fizzling of soda pop, and racking of shot guns. I was in Reno, in a meeting room so foreign from any place I had ever been, yet there such a familiarity with those I was meeting! There were bloggers and shooters, but also veterans who served in Iraq, Afghanistan, Vietnam, and Korea. This was a convention of bloggers and others in support of Soldiers Angels/Project Valor IT. I was so excited to be helping with this event to benefit Soldiers but I didn’t understand the gravity of it just yet. It wasn’t until I met Major Chuck Ziegenfuss (the co-founder of Project Valour-IT) that it started to make sense. Major Chuck Z spoke to the group of gun bloggers, humbly thanking them for their support and explaining what Soldiers Angels/Project Valor IT was all about.

I listened to him tell his story of war, loss, sacrifice and love for his Brothers in Arms. What really made sense to my 12 year-old understanding was when he began talking about electronics…electronics for wounded soldiers – voice activated laptops! Soldiers’ Angels/Project Valor IT was sending electronics to soldiers injured to the point of extremely difficult to no communication ability so they could correspond with their families, their wives, parents, and children. That was the moment the light went on. Right then I felt horrible that children didn’t know if there mom and dads were okay, but then I felt so relieved to know that there are people out there helping the men and women who help us most. Hearing Chuck’s story first hand, I knew that this was something I wanted to support. I’ve had “Soldiers’ Angels” with a link on my blog ever since and I’m always eager to stand up and talk about Soldiers Angels/Project Valor IT! It is one of the many ways that I can give back to our Soldiers and Veterans, and one way I can say “Thank you.”