Sara Ahren’s OffBeat: Pinch Me — I Must Be Dreaming or … Sara gets her hands on a CornerShot

This year has been such a blessed year for me and my family. The blessings keep coming even after I thought one of the biggest events of my life was over, Top Shot. Several weeks ago, however, I did an article with our local newspaper, The Rockford Register Star (see article). During the interview I expressed the disappointment I felt being eliminated so early. I really didn’t experience what I had hoped to on the show, which was exposure to weapons that I would never have the chance to shoot in my “normal” life. I was especially heartbroken to see the CornerShot used in the elimination round between Jake and Paul.

The CornerShot. Photo by Mike Ahrens.

I expressed this disappointment to the reporter and after the story ran, she was contacted by one of the owners of War Sports Industries, LLC, Martha Boswell. Martha emailed the reporter, who forwarded that email to me. Martha read the article and wanted to know if I was interested in trying out the CornerShot. I told her I would have to think about it … NOT! Getting the CornerShot sent to me was better than getting to shoot it on Top Shot, because I had access to shooting it more than I would have had on the show, allowing me some “alone time” with it. I can only correlate the anticipation I felt awaiting the arrival of the CornerShot with the anticipation I used to feel as a child the night before Christmas. When I got a tracking number, I was so excited that I only got about two hours of sleep that night.

The CornerShot finally came and I immediately went to the range, well that is after my husband read the directions and put it together. (I think I have mentioned I am not one to read instructions — it’s not that I can’t follow them, it’s just that my ADD kicks in and I can’t … especially when I’m excited.) The CornerShot necessitates the use of the instruction manual and I could see there was some assembly required. For a brief moment I lost a little bit of my “high.” Luckily, my husband came to my rescue and was able to assemble the CornerShot rather quickly. So, off to the range we went.

Sara and the CornerShot. Photo courtesy of Mike Ahrens.

The CornerShot was amazingly simple to use, although I didn’t have paper targets to sight it in at first. When we did sight in the CornerShot, we found the process, and I reiterate, amazingly simple. It requires a couple of turns of a screw for windage and elevation and within minutes it is on target. 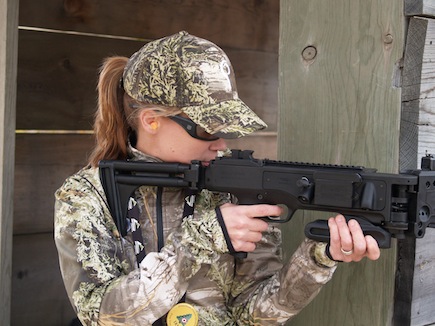 Sara Ahrens on the range in Illinois. Sara is wearing Prois camo. Photo by Mike Ahrens.

I posted photos of shooting the CornerShot on my Facebook page. War Sports Industries is one of my “friends.” Of course they loved the photos. What’s funny is that Jake Zweig commented on the photo album, stating, “So you know just how dumb of gun is it!!!” I asked Jake how he could say that after dominating it during the competition. He then responded, “You know everything with me is from a combat perspective and it weighs 14lbs for a 9mm pistol….I could carry a belt fed 5.56 for that much weigh….Bullets and maybe a little water. If it was a death ray gun for 14 lbs then yes just maybe.” To which War Sports responded to Jake, “The CSM only weighs 8.5lbs to be exact. Aprox., 9.2lbs with a GLK 9mm/.40cal.” 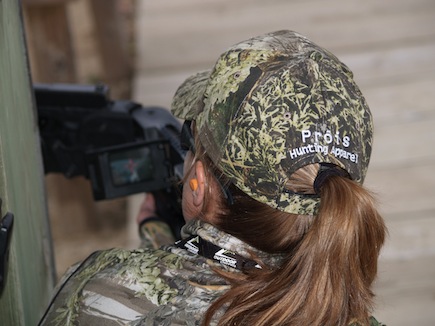 The main draw of the CornerShot, which I think Jake is missing, is the fact that it allows you to shoot at threats without exposing yourself to the threat.  Regardless of the weight, that is the benefit. I find it funny that the guy who chose to hold the RPG during the Top Shot photo shoot, complained about the weight of the CornerShot?!?

The CornerShot is a weapon system that fills a particular need for law enforcement and military personnel. It wasn’t designed for everyone, nor for all situations. But if I ever found myself in situation where it had a purpose, I would be grateful to have it! If that moment never comes, I can at least say I got to shoot it … and it was cool as hell! Thanks, War Sports! Sara Ahren’s OffBeat brought to you by Otis Technology.