Shoot to Thrill: Calling all photographers — time to join the ‘Border Patrol’

Almost any photographer will tell you, one of the keys to producing a good photo is a good composition. I could write pages on what makes a good composition, but what happens when you have carefully composed that glorious trophy shot, that beautiful landscape, only to discover when you look at the photo – hey, the hunter has tree growing out of his head and his to-go coffee cup is glaring at you from the deer’s hooves? Worse yet – your gorgeous landscape is ruined because there’s some crazy real estate sign edging in the bottom corner? Granted these things can be fixed in post processing, but that’s time consuming and tedious.  The remedy for that type of SNAFU?  Consider yourself BORDER PATROL!

Compose the image, remembering that our eyes see what we want to see. Hence, the failure to notice that pesky real estate sign. Our cameras see it all: Every last distraction in the frame.

Once you have composed the image, then become the stealthy border control agent; review the edges. Are there oddball pieces and parts of things lurking around them? (Good heavens, is that a foot sneaking into the edge of the frame next to that mushroom?) After you’ve run a good border patrol, check around the edges of the images. Scrutinize the subject. Is there a foxtail going straight up that poor dog’s nose? Might there be a giant oak growing out of the top of the successful deer hunter’s head? God forbid, do the waterfowlers have frozen snot on them? (Hey, it’s a reality of waterfowl hunting!)

It’s a bit like teaching a child to cross the road – look once, look twice, look again just because.

There are several ways to remedy the distractions when you see them and mutter to yourself – “OMG, that dog has foxtails growing out of his ears!”

Give it a try the next time you are composing a photo and save yourself the embarrassment of ending up with an image like this! 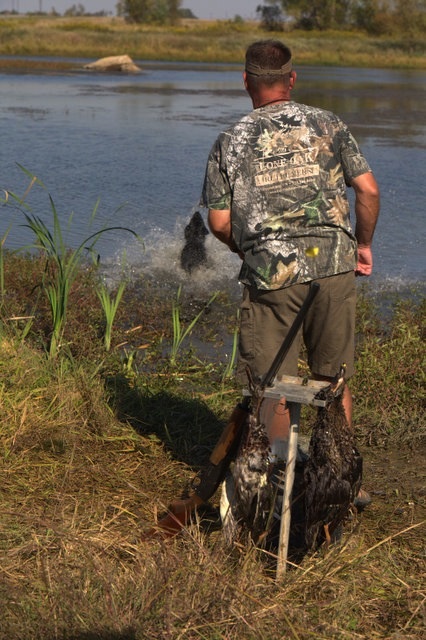 See why Gretchen says you need to be the ‘Border Patrol?’

Note the extremely poor composition, which resulted in it appearing this dog handler had a gun barrel in a less than pleasant location!

Follow Gretchen Steele at her blog, Walkin’ with the Wild Woman.