Here is your chance to win one of five Hunter Hills Journals. Just tell Women’s Outdoor News about your favorite or most memorable hunt in 2011.

Hunter Hills Journals are 100 percent handmade top grain leather journals with acid-free, hand-torn pages that are sewn in by hand.  The pages are pre-printed and formatted for journaling fishing and hunting trips with harvest records and photos.

Hunter Hills Journals are unique journals that make perfect keepsakes and memory books that can be handed down for generations.

WHAT WAS YOUR FAVORITE OR MOST MEMORABLE HUNT IN 2011? 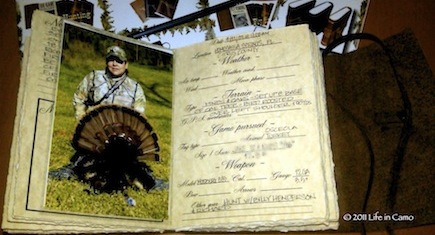