If you can’t go to SHOT, fill your time with robotics and … steel

Just last week, it seemed like everyone and her brother in the shooting world was heading to the SHOT Show. Sadly, I still have one more year before I can make it out to the show myself. Luckily, there is no height limit … but, they do have an age limit! I hope everyone who attended had a fantastic time. I really, really wanted to go this year; I even got a press-pass! But the age limit overruled the pass. Fortunately, this weekend I didn’t have the opportunity to mope, as I had a robotics competition about three hours away, and a steel match at my local range on Sunday.

Yes, when I am not shooting at targets, I quench my competitive nature with robotics (the competition was a Vex Robotics competition). Each team has two drivers and a coach; you go against other teams and try to score more goals by placing objects in containers. Most of the robots use claws or conveyor belts to pick up items and drop them into the containers or goals.

First was robotics on Saturday. It seemed promising. The controls were working, my teammate had programmed the controllers to what seemed like perfection, and we were fixing the little bugs to the best of our ability. Batteries were charged, the keys were in, and everything was plugged in. We were ready to go! 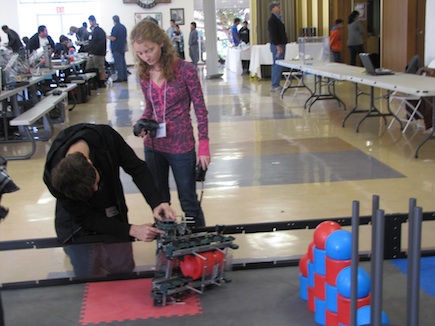 There were six matches Saturday and I think that I could sum it up rather easily.

Yes, there were many “arrrgs!” that day. On every match, something had gone wrong. At one point when I was controlling, I pressed the wrong button, causing the robot to expand to the point that it tipped over. For our team, it felt like going up to shoot without ammo.  Needless to say, we lost that match as our robot lay hopelessly on its side.  My team found out that although we could control our robot accurately and for a good amount of time on the practice field, on the actual course the robot could only move for about five seconds before stalling out. We tested everything – batteries, connections, wheels, motors. Everything seemed to work fine! It wasn’t until we were about to leave that a teacher from a nearby school gave us a possible explanation to our spaz-tastic robot. Maybe, just maybe, our motors were overheating.

That seemed to be the most plausible diagnosis for our little robot. The day was overall very fun. It was frustrating at times, without a doubt, yet our entire team did have a lesson reinforced: perseverance. We had six matches to do, and by the third one it seemed like it wouldn’t make a difference if we went home. Yet we chose to stay and finish the day and try our best to fix the robot. Perseverance drives people to achieve things that others would only give up on. If we hadn’t stayed, we may have never have learned what was wrong with the robot!

The Lack-of-SHOT-Show weekend didn’t end there. I woke up early on Sunday, excited for our Club Steel Challenge match, thinking this would end the SHOT Show blues.  Yep, there was a club match all right.  As I came barreling up the walkway with excitement and my REVOLVER GEAR in hand, Eric Leach was showing me a shot gun shell. We all know what that means! It was a shotgun match. Oops.

How did SHOT Show go? I’ll be seeing you all next year.