Mia & The Little Gal: Starting the year off with a quack and a ‘bang!’

As we start the New Year I have been sick – sniffling, sneezing and now … coughing. The Little Gal has been helpful (as well as tolerant), but the cold doesn’t seem to go away. Hank and the Little Gal put me to bed before 7 p.m. on New Year ’s Day. I woke up feeling just about the same as the day prior, which was, to put it nicely, not well. The Little Gal decided I needed fresh air so she and Hank got everything ready and we headed out the front door.

They were taking me duck hunting! I was super excited because hunting always makes me that way, and because the Little Gal was pretty pumped up. Bonus!!

We went to one of our favorite “honey holes” and set up for the ducks. This spot is a glorious one because this time of year nearly every pond is frozen, so finding open water is tough. The water flowed nice and slow, creating the ideal landing spot for ducks.

We were all chilly as we waited. Then before we knew it, we were sweating with excitement because the ducks were coming. Hank whispered to us, “Be ready!” and nodded toward where they were.

Now I have to say, something amazing happened this day …

This was our first duck hunt of the season, and last year it took a lot of directing to get the Little Gal a duck. She would wait too long and shoot as the duck sat on the water or she would try to shoot too early and we would watch as the ducks would flee unharmed.This time was different.

I watched. She had her gun up and ready before Hank spoke. She lead the ducks as they came and then in shear amazement, I watched as she “cut a duck.” (Those are her words, not mine. More about that later.) That shot blasted and just like you would dream, the hen fell from the sky. Then without being told, she continued to shoot at a drake as he turned and ducked away. What a wonderful, amazing thing to watch as she grinned from ear to ear with her first duck of the year. 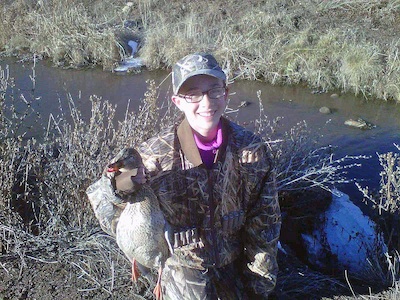 The Little Gal with her prize duck. Photo by Mia Anstine

I went to SHOT Show last year, and the Little Gal is not old enough to attend. She asked me to bring her something from Las Vegas. I looked and looked and didn’t really find anything fitting. I was on my way from one appointment to another when I saw the Duck Commanders. The Little Gal just loves them. I decided it was what I would get her. I stood in the long, long line to meet the guys and get an autographed photo of the crew. The Little Gal still has that autographed photo that I brought home for her. In the top left corner, they wrote her name and “Cut ‘em!”  She was proud today to run and grab that photo. She said, “I cut it!” I smiled real big. “YEP!” She sure did and made Mom feel so much better too. A special thanks to my Little Gal. 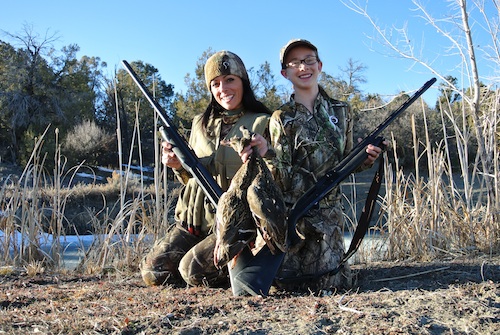 Mia & the Little Gal starting the year off with a bang. Photo by Hank Anstine

Follow Mia Anstine’s life at her excellent blog, My Many Outdoor Adventures.