Millisecond Molly: Where Molly Smith first learns to argue for the Second

Often I find myself involved in activities that lead me to experiences that I never expected. I don’t plan for these intersections to occur, but they seem to always find a way! High schools have an event called Mock Trial. Basically, a criminal case is created in which the students play the various parts of the court and are judged on their performance by actual attorneys and judges. I figured this might be an interesting after-school activity, something that would widen my experiences, teach me about our judicial system, give me the opportunity to get out of my comfort zone and try something new.

When I signed up I had no idea about what the case would be or any of the details. Imagine my surprise when I found out that this year the case was about a person accused of murder, and a pretrial motion regarding the legality of the woman having possession of a concealed weapon. Concealed weapon? Sounds like a Second Amendment case!

You can picture my astonishment when the coach announced that I would be assigned to and in charge of preparing to be the pretrial prosecution attorney. The prosecution was arguing that the concealed-carry statute was constitutional, despite preventing many people from having concealed weapons. I actually looked forward to this because I never thought about defending the other side. But as with most things in my life, I was headed toward something I never expected. The coach changed my role to the pretrial defense attorney just a few weeks before the competition! As the pretrial defense attorney, I was presenting a more open view to the Second Amendment.

It’s common for people take for granted the Second Amendment, or interpret it to mean something else. It also is common for people to take for granted the people and organizations that fight to keep our right intact – such as the NRA and attorneys like Alan Gura, who took the D.C. v. Heller case clear to the Supreme Court. There have been many court cases to preserve these rights, and one of the most well-known cases is D.C. v. Heller. Part of my job as pretrial attorney was to read through past court cases regarding similar issues, such as Heller. It was amazing to read about those cases, like McDonald v. Chicago and Heller – two Supreme Court cases that successfully outlined the importance of the Second Amendment in modern-day America. 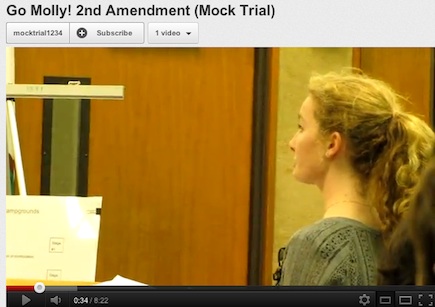 Molly's parents posted a video from the competition at YouTube.

Heller was an amazing case, which defended the right to bear arms; it marked the right to bear arms as an individual right, while McDonald held this right to be fundamental, much like the First Amendment right of free speech. I have a true admiration for attorneys such as Alan Gura, who fought the D.C. v. Heller case clear to the Supreme Court, not just for Heller but for all of us!

Simplified, my task was to defend the Second Amendment as our right to keep and bear arms and explain who is adequate to receive a concealed-carry permit. I had to learn about the process of getting these permits.

There are three types of states when it comes to the distribution of concealed-carry permits. No-Issue states do not issue permits at all; Shall-Issue states give permits to all who meet the requirements; and May-Issue states reserve the right to reject people applying, even if they meet the requirements. Heller, by marking the right as individual, raised this problem and deemed No-Issue States completely unconstitutional! This also brought problems with Shall-Issue states. Both individual and fundamental rights mean that anyone who meets requirements should be able to receive a permit, not leaving too much discretion to the government authority filtering the rights. In this case, it was the sheriff’s department’s job to choose who received a permit, opening doors for prejudice such as racism, sexism, or even just awarding permits to those who were high-power positions! 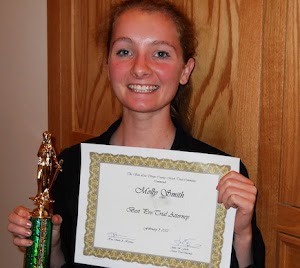 In the multiple mock trial competitions I presented at over the past few weeks, I felt great. Although it was not an actual court hearing, there were heated debates and discussions about the Second Amendment. I was comfortable and confident in all I have learned. I was so happy that I “won” all my pretrial motions, meaning the concealed-weapon charge was tossed out! At the end of the competitions, I was also awarded “Top Pretrial Defense Attorney” for the county.

This experience has been one that I will never forget! I learned so much about the judicial system and the Second Amendment, as well as gaining an even greater knowledge of the first ten Amendments that make up the Bill of Rights and understanding of why it is so important to defend them.