How to Fit a Shotgun with CZ-USA and Dave Miller

I’ve been struggling with my shotgun shooting for the past few years. Not so much 3-gun or wing shooting, but oh … those orange clays. To help up my game I finally decided to get fit for a custom shotgun. I reached out to Dave Miller of Miller Shooting Sports, who also works as the shotgun production manager and pro-shooter for CZ-USA. With tools in hand, he met me at a shooting range in southern Ohio and we began the first step to getting fit for a custom shotgun – the measuring.

First, Dave asked me how I planned on using the shotgun. I informed him I wanted to increase my skills shooting sporting clays and in turn, use the same shotgun for wing shooting. Dave assured me once I had a shotgun that fit me correctly I would find shooting easier. Rather than struggling to mount the gun correctly and focus on the target it would just happen. 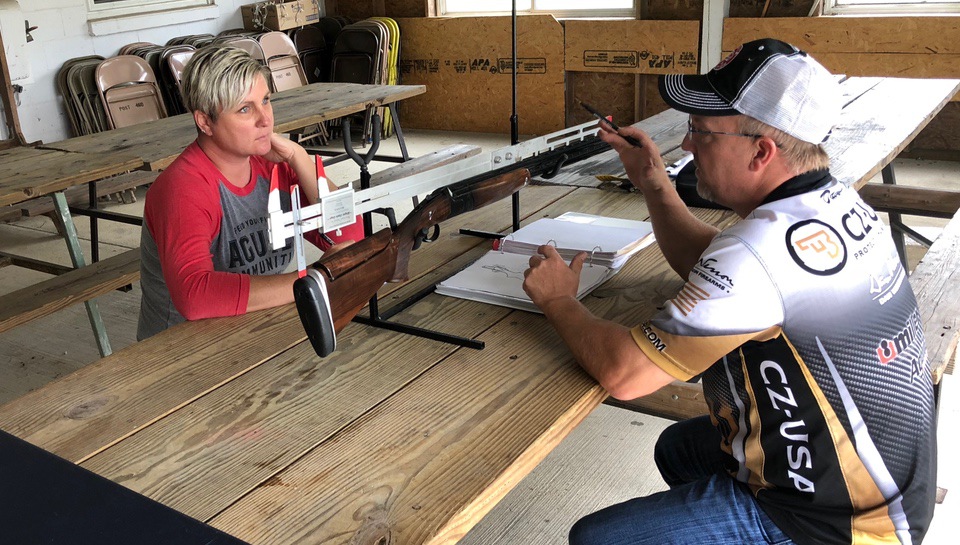 Dave explains how a custom fit shotgun is parallel from the rib through the comb.

Dave brought an older CZ shotgun that allowed him to make adjustments on the stock until it fit me correctly. Also, he had a shotgun combo gauge that allowed him to take all the measurements he needed. Using an unloaded shotgun (that we confirmed every time I picked it up), I mounted the gun numerous times.

Measurements to Fit a Shotgun

The most critical measurement when getting fit for a shotgun is the drop at the comb (B). It allows your cheek to rest at the correct height, which in turn allows your eye to fall naturally in line with the gun’s rib. With the proper drop, you can quickly mount a shotgun without any need for adjustment before firing.

Monte Carlo stocks allow for more comfortable fit and considerably less felt recoil. This style of stocks is common on target guns because of such high volume shooting.  Note the drop (Photo E), which is the farthest comb measurement before the heel.

The CZ-USA Drake has a standard stock.

The drop at heel (C), is the distance from the rib line to the heel of the gun. Unlike the drop at comb, where a small change makes a big difference, a fairly wide range of drop at heel measurements can comfortably accommodate an average shooter. However, the amount of felt recoil is affected by different measurements. For instance, a gun with a straight stock (little drop at heel) has less perceived recoil since the force is directed straight back into the shoulder. On the other hand, a stock with a large drop at heel will exhibit more felt recoil because the gun rotates up into a shooter’s cheek. However, this gun typically feels more comfortable during the mount and swing. It’s all a matter a preference. 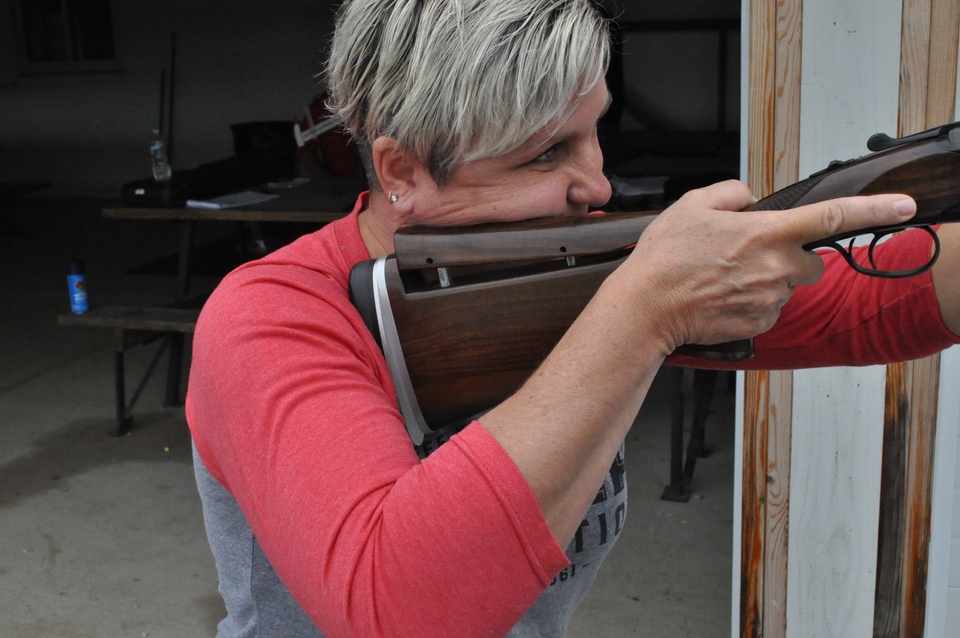 Michelle had to mount the shotgun numerous times as Dave made adjustments.

The distance from the rib line down to the bottom tip of the butt is the drop at toe (D.) This is the lowest portion of the butt stock and also, the lowest part that contacts the shoulder. The greater the difference between the drop at heel and the drop at toe, the longer the butt pad. The larger the pad, the more the recoil is distributed on a shooter’s shoulder. Likewise, the smaller pad, (less difference between drop at heel and drop at toe), results in all the force going through a smaller surface, thus, more felt recoil. 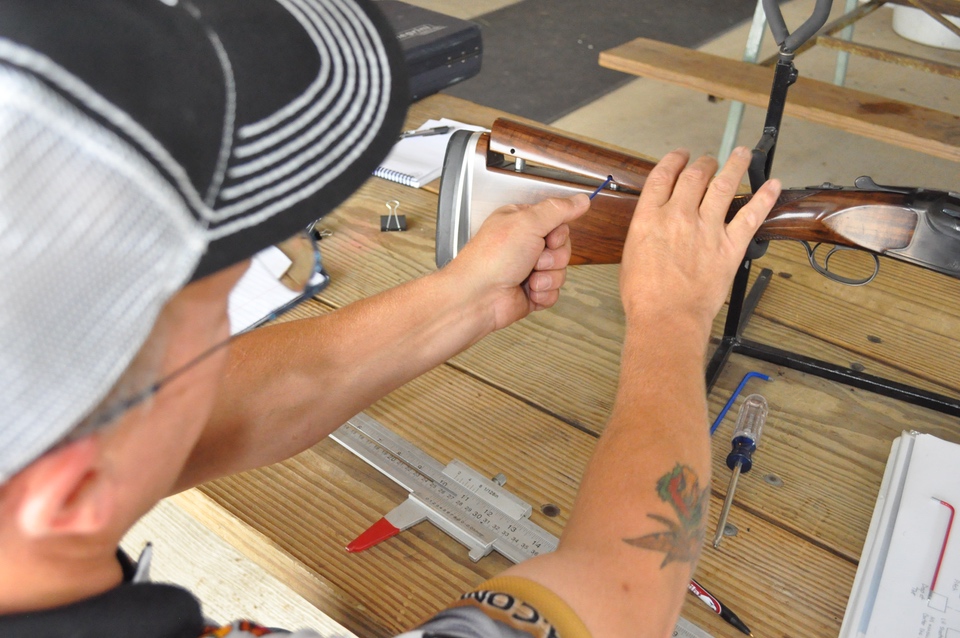 Pitch (F) is the angle of the butt pad’s back surface, measured off of a perpendicular line drawn down from the rib. This measurement is especially important for women with larger chests. If the stock has too little pitch, it will distribute recoil with only the toe section of the butt, often bruising a shooter’s shoulder. With more pitch, a stock distributes recoil through the entirety of its corresponding butt pad, making the gun more comfortable to shoot.

A length of pull measurement that’s too long forces a shooter away from the gun, moving her cheek back from the point of the comb where it belongs. Also, the butt may catch on clothing when quickly mounting the gun. On the other hand, too short a distance is uncomfortable to line up. Then, a shooter is forced ease her face back, away from the breech. 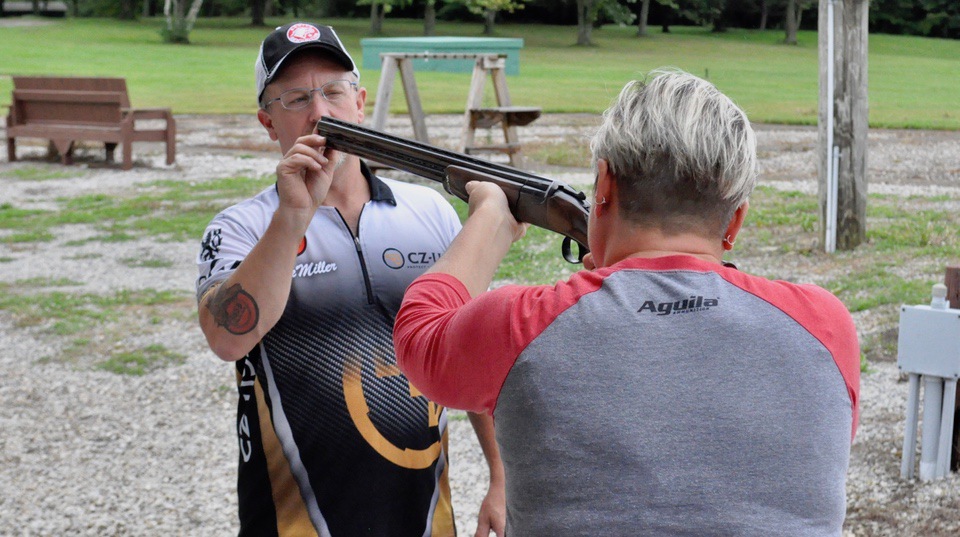 Dave determines if the pupil of Michelle’s eye lines up correctly on the rib of the shotgun. Yes, this is an uncomfortable photo, however, the gun is checked numerous times to confirm it is unloaded. 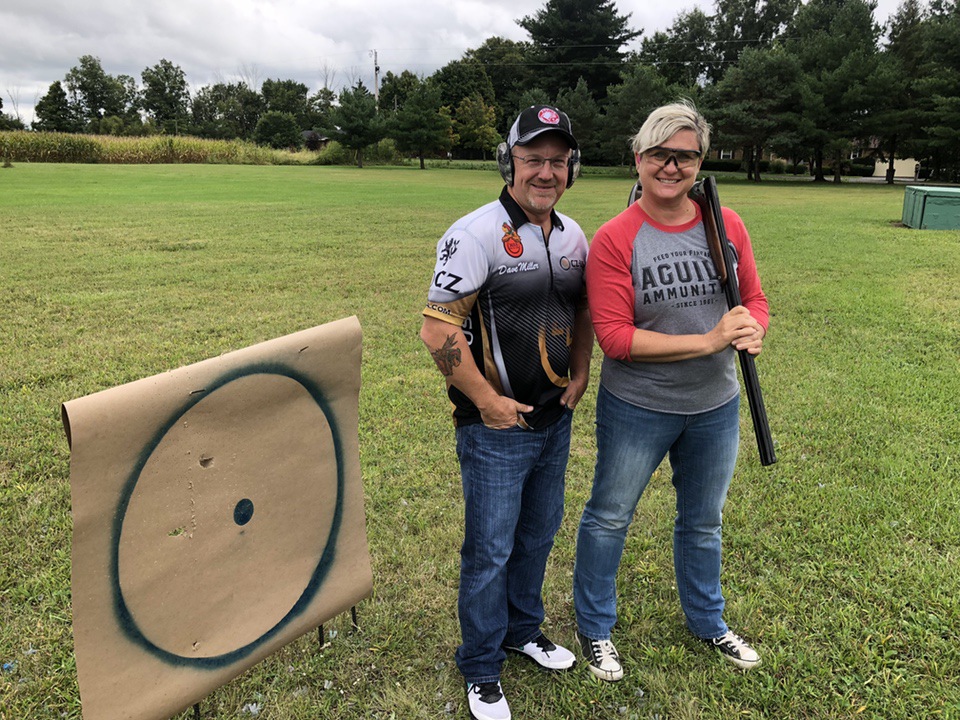 Last step … the pattern board.

After the measurements had been taken, I took a few shots at the pattern board. The pattern fell exactly where Dave expected it would fall. To finish the order, I had a few things to decide on, such as the type of wood for the stock, what color barrel and then some engraving I’m having added. Now, all I have to do is wait.