Ashley Hlebinsky, chief curator of the Cody Firearms Museum (Buffalo Bill Center of the West) in Wyoming, is co-host of the new series, “Master of Arms,” on the Discovery Channel. The show, with its 8 episodes, launches on Fri., Nov. 2, at 10 p.m. EDT/PDT.

Ashley talked to us about the show, and what we can expect from it, recently.

“The Discovery Channel reached out to me in August 2017. We met at SHOT Show in Las Vegas last year, and I auditioned. I am honored to be a part of this show,” said Ashley. “Master of Arms” challenges 3 contestants to compete in “2 historical challenges that call upon era-specific weaponry, from the firearms of the frontier to the blades of the Vikings. But these aren’t just quickly fabricated weapons – each tool will be heavily researched and crafted pieces of art.”

Ashley on the right, with Trenton Tye (far left) and Zeke Stout (middle).

This role fits into Ashley’s realm of expertise, since she is an expert on the study of weaponry. Her role in the show is to judge whether the weapon made by the contestants is historically accurate. The other judges — Nicholas Irving, Trenton Tye and Zeke Stout — focus on technology, technique and innovation aspects of the show.

Casting agents for the Discovery Channel found 24 contestants for this season’s series, and during the run of the show, these contestants – who may be bladesmiths, gunsmiths or blacksmiths – were challenged to design and build a weapon, such as a sword or a flintlock rifle. “This is a show about craftsmanship and the art of weaponry,” said Ashley. One contestant is chosen at the end of each show as the “Master of Arms” and wins $10,000. 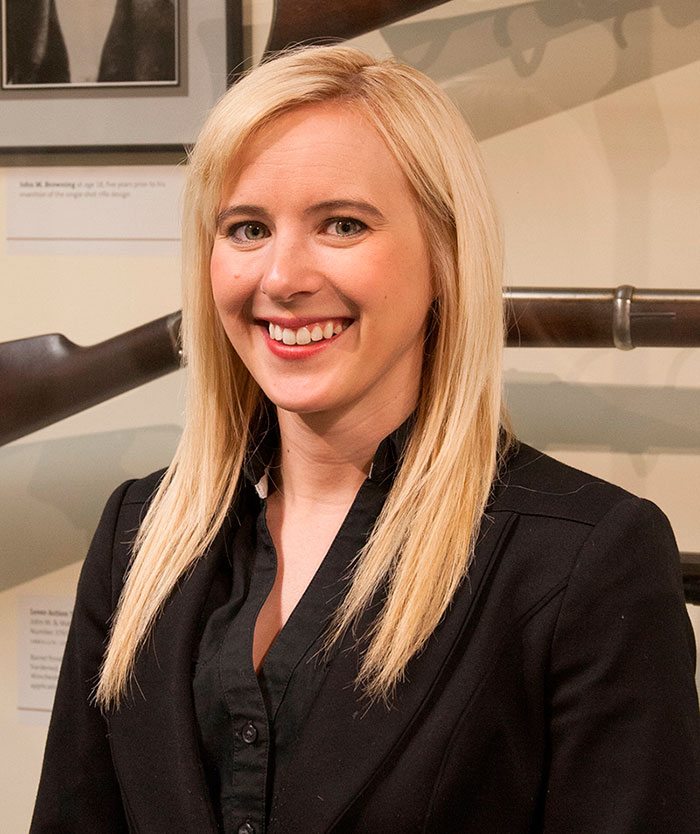 Contestants are given some historical leeway, and allowed to make improvements on the weapons – if it works and fits in with the period in history. “The contestants are truly first-class craftspeople and they have incredible stories.” Ashley said she particularly enjoyed spending time off the set, learning more about their lives and artistries.

When asked what she says to naysayers who complain that the show is about violence and weapons designed to kill people, she responded, “This is a show about craftsmanship and the art of weaponry and battlefield technology.

”What’s Ashley’s takeaway from the show? “The opportunity to see the complex nature of artistry. I’ve never been able to watch craftsmen from start to finish.”