What You Need to Know about Posterior Vitreous Detachment (PVD)

Christine Corkell is a Syren ProStaffer who shoots a Syren Tempio Over/Under 12 gauge and also, a Syren L4S 12 gauge semi-automatic. She lives on the Eastern Shore of Maryland and has been competing in Sporting Clays since 2008 and in Master Class since the fall of 2016, the highest level available in Sporting Clays. She can often be found with her friendly champagne lab, Savannah, and husband, Charlie, at competitions on the Eastern Shore and throughout the mid-Atlantic region. Unfortunately, she has been having issues with her eyes and has not been able to shoot since June of 2018, so I asked her some questions about her eye problems and what, if any, solutions she has to continue her shooting in 2019. She’s in her mid-50s and wants other ladies (or men) to know what to do if they experience the same symptoms.

Syren: Have you worn glasses or contacts in the past and had your prescription changed prior to these new issues?

Christine: Yes, I have worn glasses and/or contacts since my late 20s. I usually wear my glasses when shooting Sporting Clays, as there are always people driving around on their golf carts and they stir up the dust from the path. I have gotten dust in my eyes and it’s irritating and affects what I can see while shooting. Luckily, my prescription hasn’t changed since I’ve had these recent issues, which is a blessing. 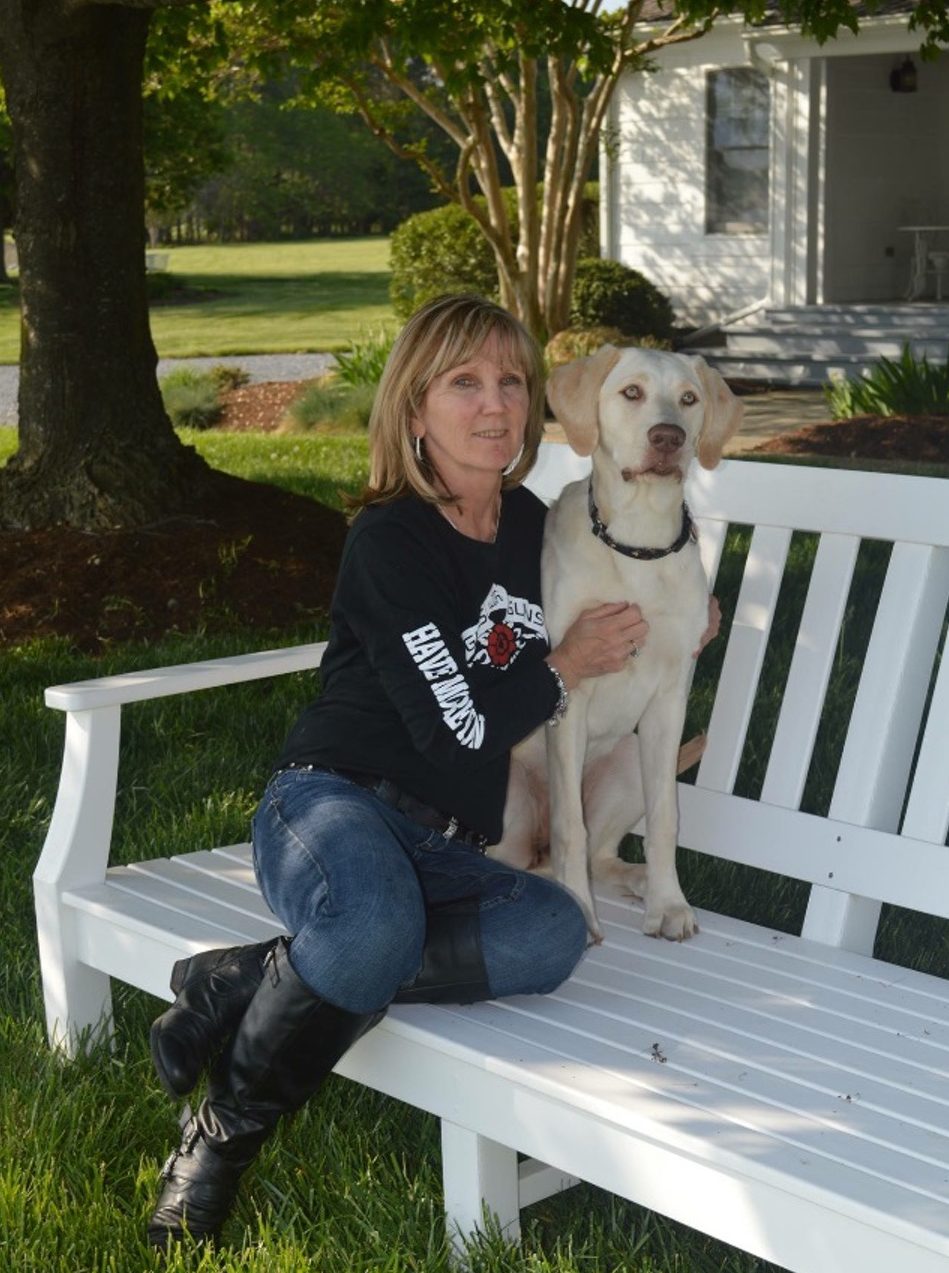 Syren: What were your symptoms?

Christine: I was outside on a nice sunny day and I noticed what I thought looked like heat lightning, although there weren’t any storms in the forecast and very few clouds. As I turned my head, it happened again. It was then that I realized that it was me, not anything happening in the sky. I called a friend who worked for an eye doctor and was told to make an appointment as soon as possible as it could be serious. Turns out it was.

Syren: At what point did you feel that you needed to go to the doctor? Did you go to an ophthalmologist or directly to a specialist?

Christine: I went to a specialist right away and found out the vitreous gel inside my eye was coming detached from my retina, and I was having floaters as well. I was told to follow up in a few weeks. I called my friend back as I wanted a second opinion and she recommended the Will’s Retina Center in Wilmington. It can be very serious and could cause blindness if not careful.

I went to Will’s and the doctor advised me not to do anything for 3 weeks, including no exercising. I was going to gym at least 3 times a week and also taking boxing. He said no high impact activity, as it is critical that it doesn’t tear. After 3 weeks, I went back and was released to go back to normal activity. I am still a bit scared that I will do something to cause injury. The floaters will blur my vision for few seconds and my vision goes away and then comes back. At nighttime, I have a white one that floats around that I can see and is very frustrating. 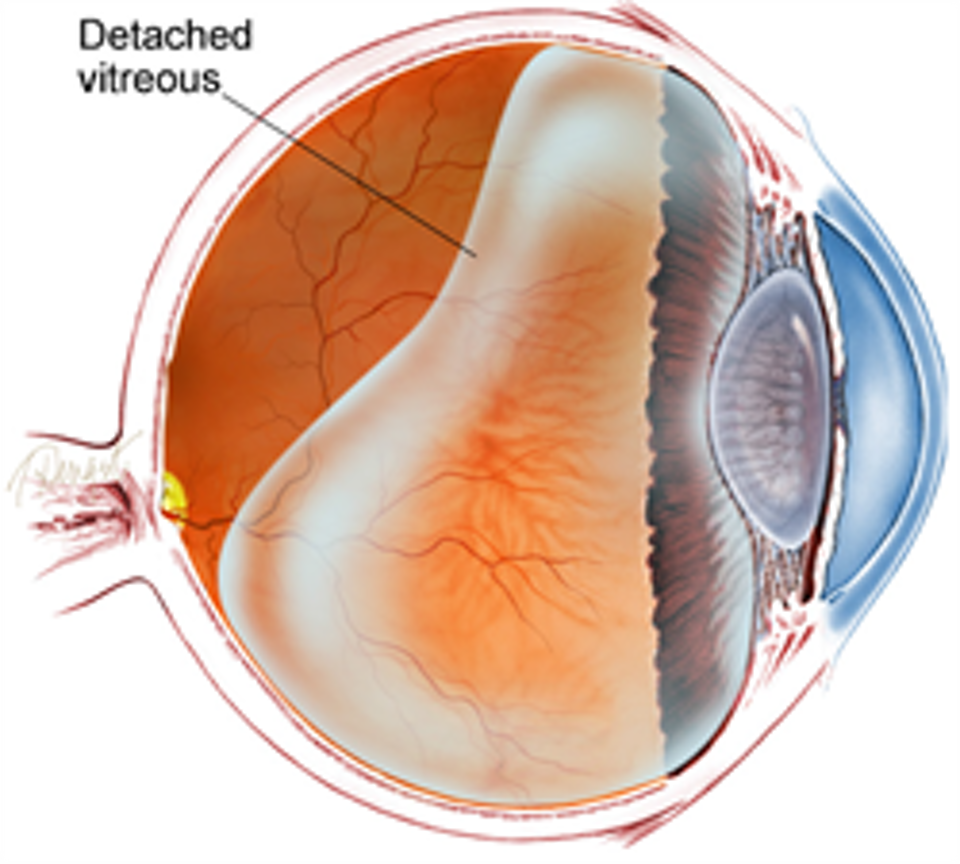 If you see dark specks or flashes of light, it’s possible you could have posterior vitreous detachment (PVD), an eye problem many people have as they age. As you get older, a gel inside your eye — called vitreous gel — can shrink. It can slowly detach (pull away) from your retina. That’s the nerve in the back of your eye that helps you focus on the images you see.

Vision problems caused by PVD usually get better over a few weeks. In fact, many people don’t have any symptoms, so they may never know they had it. But for other people, PVD can cause health issues, such as bleeding and tears. If it’s not treated in those cases, it can lead to permanent vision loss if the gel is detached from your retina.

Your vitreous gel is mostly made of water. For much of your life, it’s right up against your retina at the back of your eye, near your optic nerve. Tiny fibers attach the gel to your retina. As you get older, little pockets can form inside this gel. The tiny fibers that hold it to your retina can break. That can cause it to pull away from your retina and optic nerve. As a result, you can get a tear in your retina or a hole in your eye nerve.

Most people get PVD at age 50 or older, and it’s very common after 80. It happens to men and women equally. If you’re nearsighted, have had cataract surgery, or had some kind of trauma to your eyes, you could be at higher risk for PVD.

It doesn’t happen in all cases, but PVD can cause changes to your eyesight. You may start to notice tiny dark spots that move around in your vision. They can look like flying insects, hairs, or cobwebs. These are called floaters, and they’re the most common symptom of PVD. It’s normal to have mild floaters from time to time. But if you suddenly notice lots of them, it could be PVD.

Other signs are flashes of light and darkness around the edges of your vision. These could be a sign of a tear in your retina. You may notice symptoms in only one eye. But if you get it in one eye, you’ll likely get it in the other within a year.

Syren: Explain what was happening with your eyesight changes. This should help ladies identify if they are having similar issues or maybe just their prescription changing.

Christine: The floaters are the biggest issue now, and I have different types. Some look like little mini-Cheerios and some look like a cluster of eye lashes. They start at the top and then cross over my eye to the bottom from left to right and also right to left. There is also one that makes my vision blurry and I think I have something on my glasses so I take them off to clean them, but they are already clean.

My advice is [this]: “Don’t ignore any symptoms,” – especially if it is flashes of light! If it’s that, you need to seek medical attention as soon as possible. I have heard so many crazy and scary stories and received some good advice from people since this has happened. 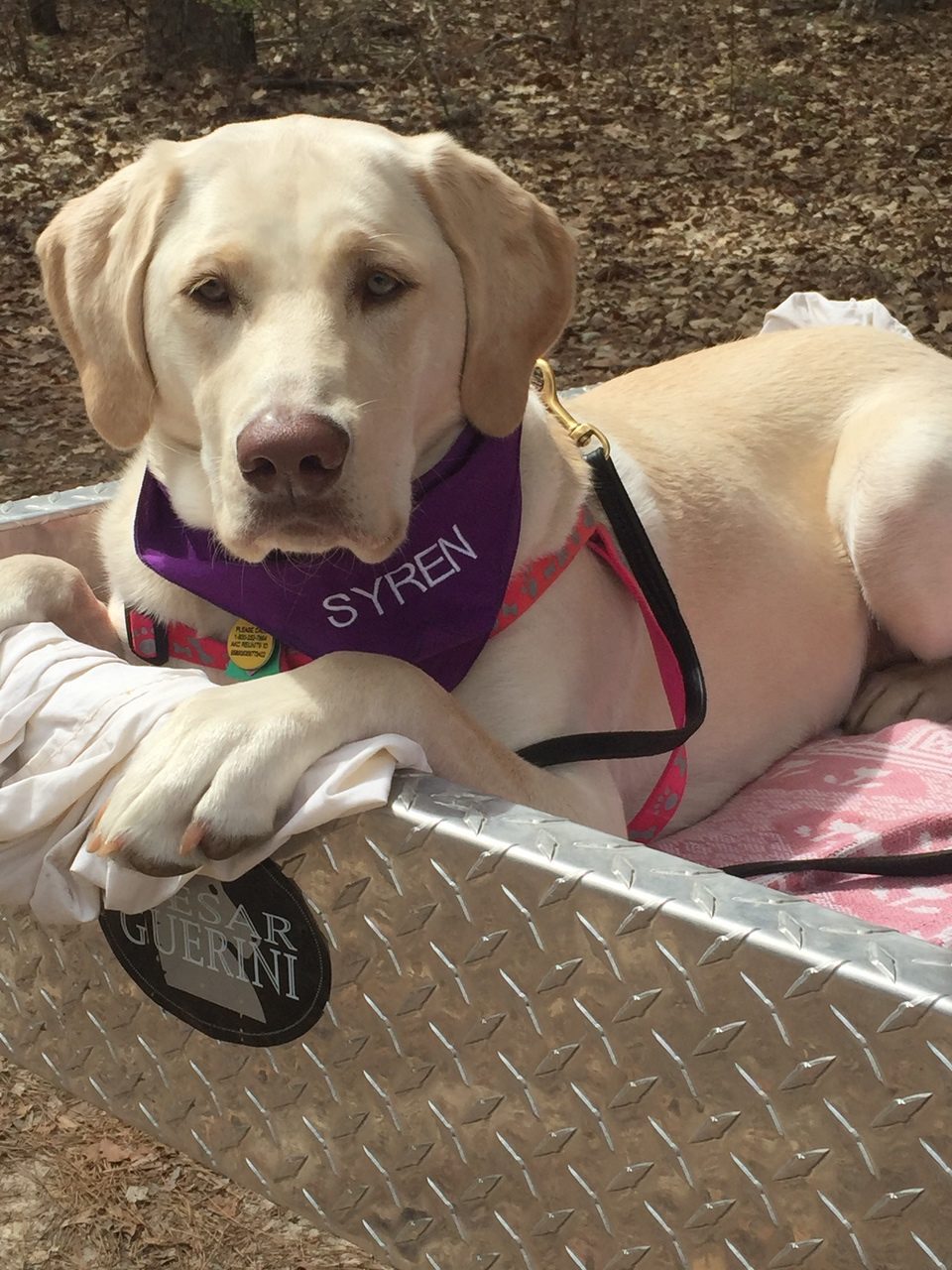 Syren: What remedy did the doctor prescribe?

Christine: Well, the worst part is there isn’t really anything they can do. Limiting my physical activity was the most important thing at the beginning and the repair takes time. It’s a pretty normal thing, with age, and he said I’d just have to learn to live with it.

Syren: What was your doctor’s recommendation on shooting?

Christine: Shooting during the mandatory 3 weeks of inactivity was not recommended … and so I didn’t. The doctors I saw aren’t shotgun shooters so don’t really understand recoil, but felt that I may strain my eyes during shooting and wanted to make sure the retina didn’t tear … which would have been much more serious with a longer recovery time.

Regarding the floaters, I was told that the brain trains you not to see them, but it may take up to 6 months. It’s now been 6 months and I haven’t noticed much difference, but hoping soon.

At the time this happened, I had to cancel out of the NSCA Regionals and haven’t shot any tournaments, except a Ducks Unlimited charity event. I shot so badly I decided I’d better wait it out. As of October, I have gone out shooting sporting clays twice in the last few weeks to practice and learn to work with what I am seeing – or not seeing. I’m surprised I remembered how to load the gun! Shooting is a passion of mine and it is relaxing and fun for me. I enjoy shooting my Syren Tempio, but looking forward to the challenge of shooting the new Syren L4S. I would highly recommend it the sport is growing and lots of ladies are now coming out to enjoy it. 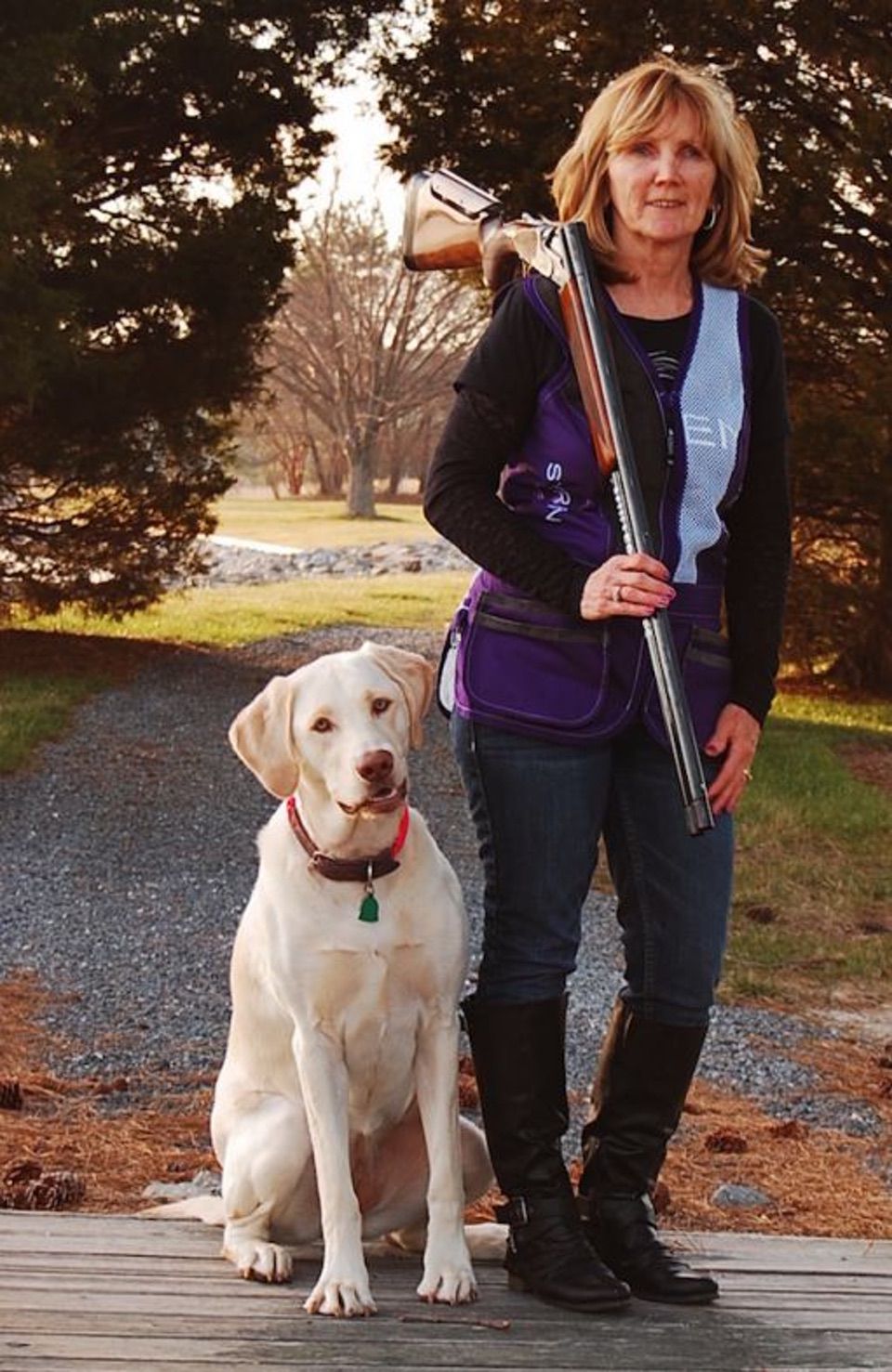 Syren: Is there a surgery – such as Lasik – that could help?

Christine: If the retina tears, they would have to do surgery to repair it. With the floaters, there is a surgery, but they don’t recommend that as it can cause cataracts. I would then have to have another surgery to remove the cataracts and both surgeries come with a risk of infection, and could lead to going blind. It is recommended to live with the floaters, unless it gets so bad that I decide I can’t live with them anymore.

Syren: Did your doctor say that there is any way to prevent any of this from happening?

Christine: The doctors said there was not really any way to prevent this from happening. I have a friend that lifted a desk and tore his retina and another one that was just stepping off the sidewalk and fell. Sometimes, it just happens.

Syren: What is your advice for ladies/shooters that may be experiencing some of the same symptoms that you have had?

Christine: The only advice I would give is to take care of yourself, exercise and eat healthy. Most importantly, enjoy life and be happy and kind to others. Don’t take your eyes for granted and be thankful we are blessed to see beautiful things in this world.