Babbs in the Woods: She shoots better against the men

Kudos to Karie Scott, from Oakdale, Tenn., who on Oct. 1 won the National Wild Turkey Federation’s Wild Turkey World Still Target Championship in 20-gauge Open Division. We’re not talking the Ladies Division either. She beat her mentor, Steve Conover, who taught her to shoot! Previously, Karie had won first place the last two years in the Ladies Division. This year, she competed against the big boys to see who could put the most pellets in a three-inch circle on a paper target. According to a press release, “Shooters faced some of the most difficult weather conditions that the Still Target Championship has seen in recent years.” That included humidity, gusting winds and fluctuating temperatures. 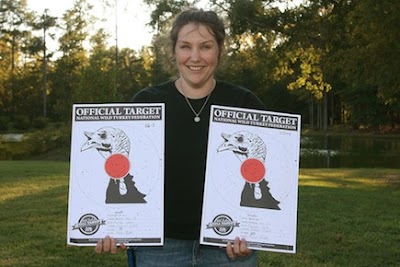 Karie Scott and her winning targets. Photo courtesy of NWTF.

Karie illustrates our point so well, that women do not want special treatment; they just want an opportunity to participate. She said, “”I think I shoot better against the men. There are more of them you have to beat.”

We couldn’t have said it any better than that!

Visit the NWTF’s website to see the press release.