It’s more than a pink thang

Babbs in the Woods: Which came first? The gun, or the pink?

So, I saw the header in my Google Alerts that read “Local Gun Sales Getting Boost from Women,” and then, the description, “According to the National Sporting Goods Association, 46.5% more women are target shooting today than they were a decade ago. A 2011 Gallup Poll found 23% of American women now own a gun. They’re buying them not only for hunting, but for protection.”

I knew about the Gallup Poll that reported 23 percent of women now own a firearm, but I did not know that 46.5 percent more women are target shooting than a decade ago.

So, I went to the article, written by Don Coleman at KJCT8 in Grand Junction, Colo. His opening line flipped my innards: “It’s a trend marked in pink from the shotgun shells to clothes – and don’t forget the guns.”

“A trend marked in pink?” I do not think that the majority of women target shooters out there are sporting pink on their guns. Is he being metaphorical, perhaps? Babbs with the family AR and Paige Eissinger with I.O. Inc's first pink AK-47. First came the desire for a gun, then the choice for pink. Photo by Jason Baird

Then Coleman quotes a salesman at the local Sportsman’s Warehouse, who said, “I never thought I’d see it like this. Thirty percent of our gun sales are to women. … They’re buying them not only for hunting, but for protection as well. I have no idea where it’s coming from, but the demand is definitely there.”

Then, the article gets loosey goosey, with a quote from Colorado Parks and Wildlife Officer Kathleen Tadvick, who says, “I’m all about pink, but it has to be the pink camo.” She mentions about how classes for women in hunting fill up and so, “the interest is there.”

Then, the article leads to how turkey hunting is popular with women.

Whoa, let’s get back to the premise here. That it’s a trend marked in pink. It’s way more than that, Mr. Coleman. It’s way deeper than that.

And I never hope to read that an increase in men’s participation in hunting – which has been waning for years now overall – is marked by a “trend marked in blue.”

You want to talk condescending?

For years now, I’ve riled editors and publishers and some of the good old boys in the system by saying that women just want gear that works for them in the field and on the water. That’s it. Some of us may want to accessorize it, or brand it with all pink or a bit of pink. Pink is a color. But women do not shoot because they found a pink gun that is cute. And God help the woman who wears pink camo to the turkey woods this season. 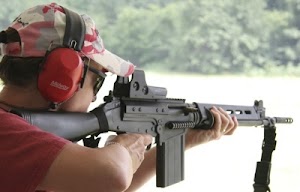 Babbs on an FNFAL. Wearing a touch of pink on the hat, not on the gun. Photo by Jason Baird

The question – why is there a burgeoning women’s market in the shooting and hunting arenas – deserves a more thorough investigation. Soon, when the U.S. Fish & Wildlife Service finishes its National Survey of Fishing, Hunting and Wildlife-Associated Recreation, we will see some real numbers. We suspect it will show that even more young women have joined ranks of anglers, hunters and shooters – based on the 2006 results that showed a huge increase in this demographic.

We know it’s more than a pink thing, though.  A lot more than that.