Redhead for Her camo turkey vest is a keeper

Last year, my pal Larry Whiteley at Bass Pro Shops gifted me with a new turkey vest. Larry knows I struggle enough as it is in the turkey woods, trying not to sound like the biggest loser librarian of a hen that none of the big boys, aka toms, want to visit. So, he took pity on me and sent me a vest that I could sit in for hours at a time, comfortably. And believe me, I did. Last season, I spent at least 18 turkey days in the woods — to no avail. On three occasions, I had toms coming toward me, but when they got close, they ran away. And then, Marti Davis and I tried for three days at the close of the season, but by then, the toms were already hen-pecked. And we almost got struck by lightning, but that’s another blogpost.

Tip for the day: While racing back from the woods to the tractor shed, never carry your shotgun with barrel up in a thunderstorm.

The reason I griped about my old vest from Bass Pro Shops (thanks, again, Larry) was because it didn’t fit right! The smallest size available, it still knocked me mid-thigh and bunched up under my shotgun. Truth be told, I still took a 27-pounder while sitting under a tree in the rain (and again, dang it, another storm blew in). But, when I shouldered my Remington 870, that vest bunched up. Luckily, the tom ran in at about 15 yards, so how could I not hit it? 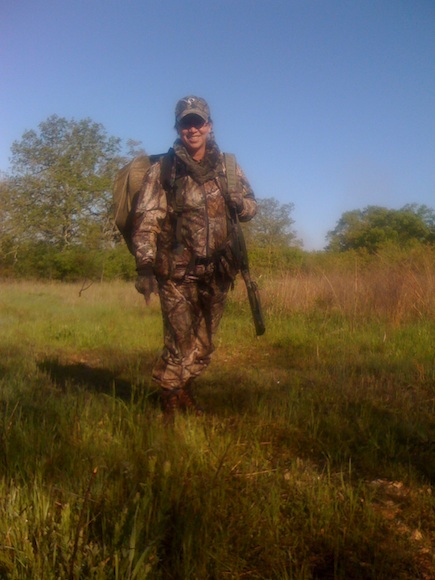 Sometimes, you only have a cell phone with you. And in this ... it's an original first gen iPhone! Can you tell? Photo by Marti Davis

Anyway, Larry said he thought I’d like this one and I don’t. I LOVE it. You do become one with your vest during turkey season. Your vest is like a toolbox of sorts. This one featured many, many pockets. I don’t have it here, or I’d count them for you. But, enough to even stuff a water bottle into the inside one. Striker pockets and a box call pocket combine with all those other pockets in a downsized lady’s fit. The straps work well, too, as they are not only padded, but adjustable. And, it comes in two of the most popular camos out there: Realtree APG and Mossy Oak Obsession. 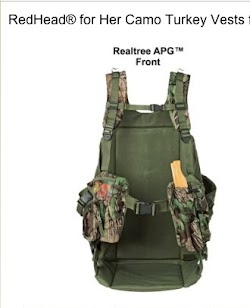 The most important aspect of this design? The seat! The seat works well, and I took a few naps reclined in it, if that tells you anything. It is supportive and flexible at the same time, and quick to fold up when I needed to move and move fast. (Not that it made any difference. I usually bump turkeys when I move toward them.)

Visit Bass Pro Shops online to order one before turkey season this year!