It is with sadness that I write this introduction to an interview with Janelle Cooper. I had the opportunity  to spend time with Mrs. Cooper at her beloved home that overlooks Gunsite Academy in Arizona 2 years ago. Mrs. Cooper passed away on July 29. We send our heartfelt condolences to her daughters and their families, and to all of her friends (who were like family) at Gunsite. It will never be the same place. ~Barbara Baird

An Interview with Janelle Cooper and Lindy

It’s a rite of passage for Gunsite 250 students. At the end of the training week in the classic course created by the legendary late Col. Jeff Cooper, each class receives an invitation to The Sconce, the home designed by Col. Cooper and his wife, Janelle. Last February, I attended a 250 class and went along with the group for iced tea and fudgy brownies – for which Mrs. Janelle Cooper is famous. As usual, visitors were made to feel right at home and encouraged to explore the well-designed fortress/home, near the training ranges and classrooms where Col. Cooper put his theories and training techniques into practice starting in the late ’70s. 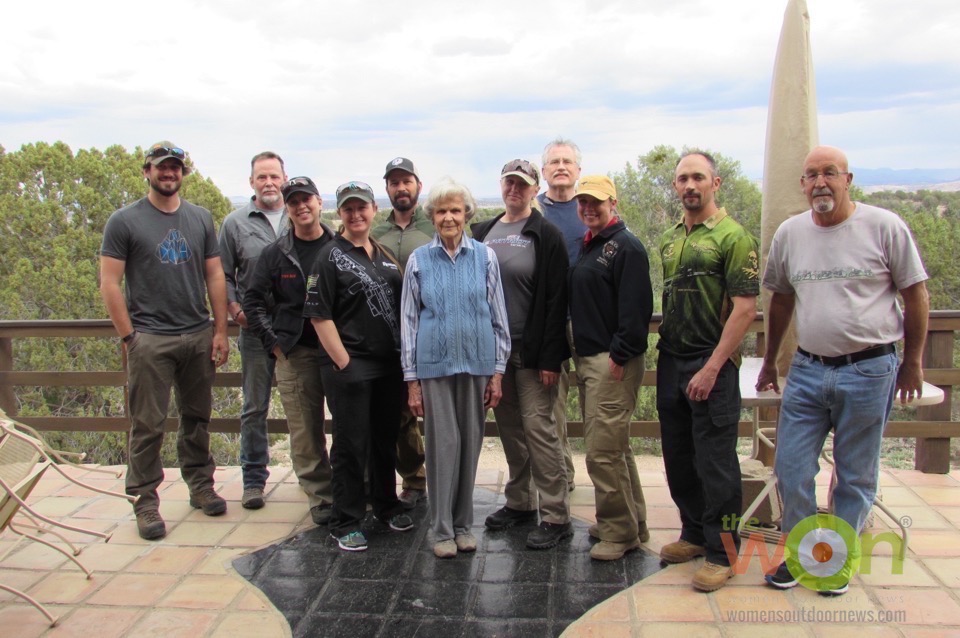 I was onsite with other gun writers from the industry, working with Remington Outdoor Company’s new RM380 a couple of years ago. Mrs. Cooper agreed to stand with us on the beautiful terrace of her home, which overlooks the property of Gunsite Academy. I am the third from the left.

I had been treated to this experience after a class a few years earlier, and although it was memorable, I knew that the class visit would not afford the opportunity to speak to Mrs. Cooper candidly and in interview fashion. As such, I asked to speak with Mrs. Cooper at a time other than the class set-aside. She and her daughter, Lindy Cooper Wisdom, graciously agreed to meet with me earlier in the week, after a full day of training, and we conversed for almost an hour around the kitchen table. Here are excerpts from the conversation, in their words, that explain the history and significance of Gunsite Academy.

Lindy Cooper: The earliest days of Gunsite were in Big Bear (Calif.). It was open competition days and Dad was developing his theories and techniques. We were all involved that way. Mom was a fabulous administrative person, and Dad’s secretary.

One of the most interesting things to me is how many more women are coming to Gunsite … my father never differentiated between men and women and how they learned. … He was very all encompassing. In the women that I’ve known in my life who have been shooters, a lot of them started out getting instruction from a boyfriend, a husband, a father who thought it was a lark … treated it as a silly thing they weren’t going to continue with, so they did not take the time to introduce them the way they had been introduced, slowly and with a weapon that you can handle at the beginning.

At Gunsite, this is the course and it’s for everyone. I’m not much of one who thinks that women need to be treated differently. … I’ve never been treated that way and I don’t really buy into that. 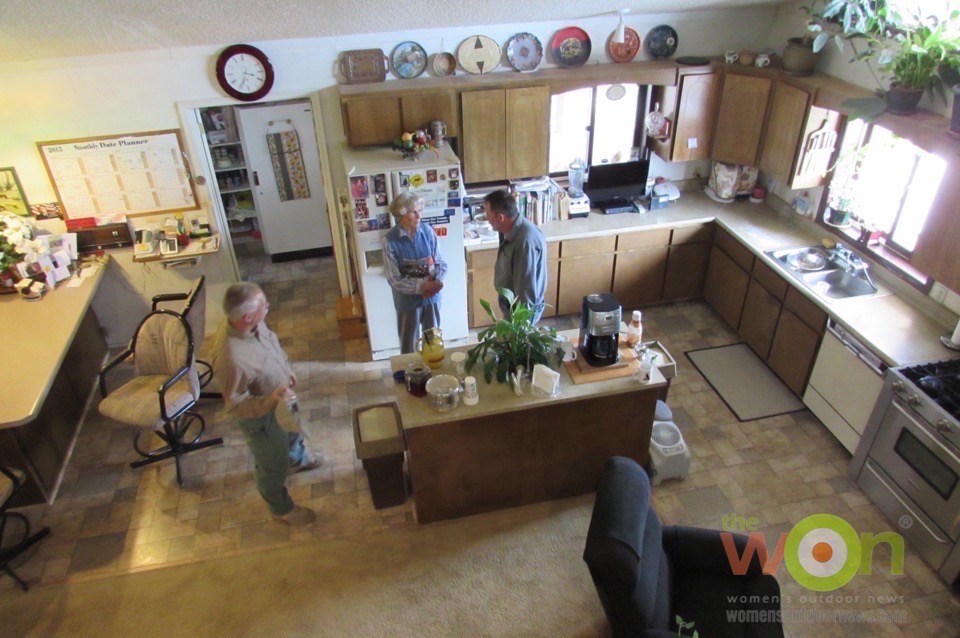 Janelle Cooper: My father and brother were hunters. … So yes, I was raised around guns and had no feeling of fear. I personally was not drawn to shooting because I’ve always had essential tremors, inherited from my mother. Since I had a tendency to tremble when I got pressured, I thought, ‘I’ll be helpful behind the shooting lines.’ As far as entering competition, no.

I did receive instruction from Jeff where I could handle the situation if I was being menaced. I had my weapon; it was not a .45. I knew what to do.

I have found, being in the background … that I got to help run competitions by running the ladders and so on, and to take care of the hospitality part. I never felt I missed anything. When Gunsite first started and we had a school, someone would sign up for a week not knowing what to expect and I think there were a lot of men, who thought it would be like a military experience where some guy would act like a sergeant and order them around … my thought was on Monday morning was to come and address the class and tell them, ‘We really are nice people around here, and we have a home and you are most welcome to come over.’ 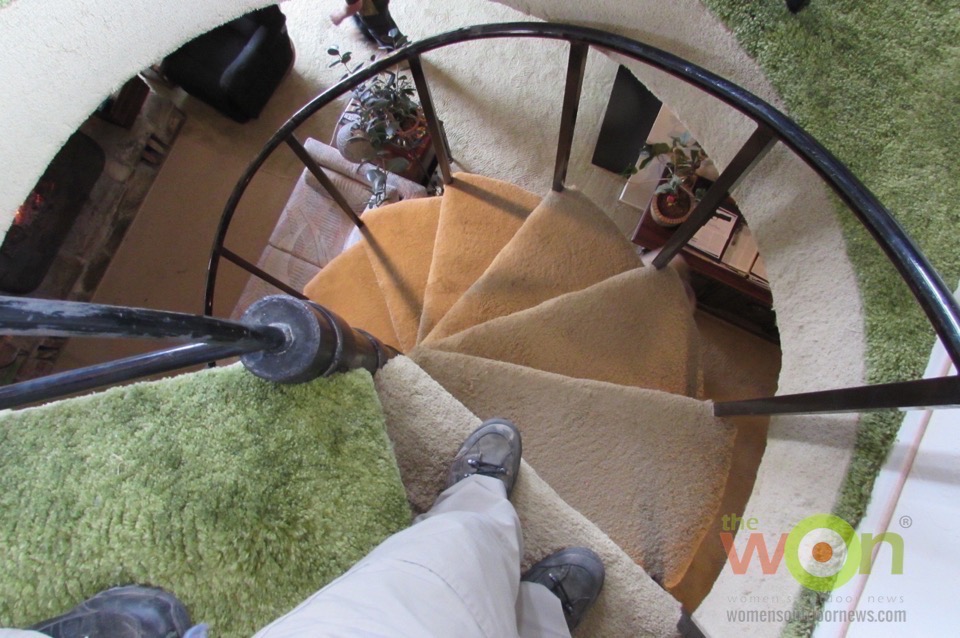 A spiral staircase leads up to Col. Cooper’s office, situated in the tower of the fortress, and offering a spectacular view of Gunsite.

Lindy Cooper: My dad was really, really smart and was very, very much a teacher all the time. We grew up having discussions about everything, all the time. There was never a separation, like I see in other homes. When we sat down at the dinner table, when he asked, “What did you learn in school today?” … it was like a seminar. For example, “Why we should embrace the Constitution as a worthwhile document?” … I grew up with this, and it never occurred to me that other people didn’t.

It was on a trip to Africa and we went to a game farm where the PH [professional hunter] had never met my father, and he had built as part of his business a guest house … a deck that went over the water and it was called Cooper’s Corner, and there were pictures in there of my dad, in a remote corner of the world. I was 46. That’s when I decided to write the book [ Jeff Cooper: The Soul and the Spirit, My Father’s Story]. I thought, I need to discover what the heck this is. Over the course of a couple of years, I interviewed people Mom and Dad knew as kids and relatives and I got to understand them as people and not just Mom and Dad.

Janelle Cooper: At this point, we would say, ‘Oh no, here comes Lindy with her tape recorder again!’

She’s [Lindy’s] the next generation who will be here when I’m gone and she will carry on. She is more like her father than the other 2 girls, although they were all their father’s daughters and never let him down. Lindy had more of the passion for learning, in effect, like taking a graduate school in marksmanship and learning about what made her father tick. She discovered that there were people in remote parts of the world, like South Africa, who knew who Jeff Cooper was and had the utmost respect and admiration for him because he’d been there to train them. … She not only had a philosophical interest in what motivated her father, but, she also thoroughly enjoyed the hunting and shooting. 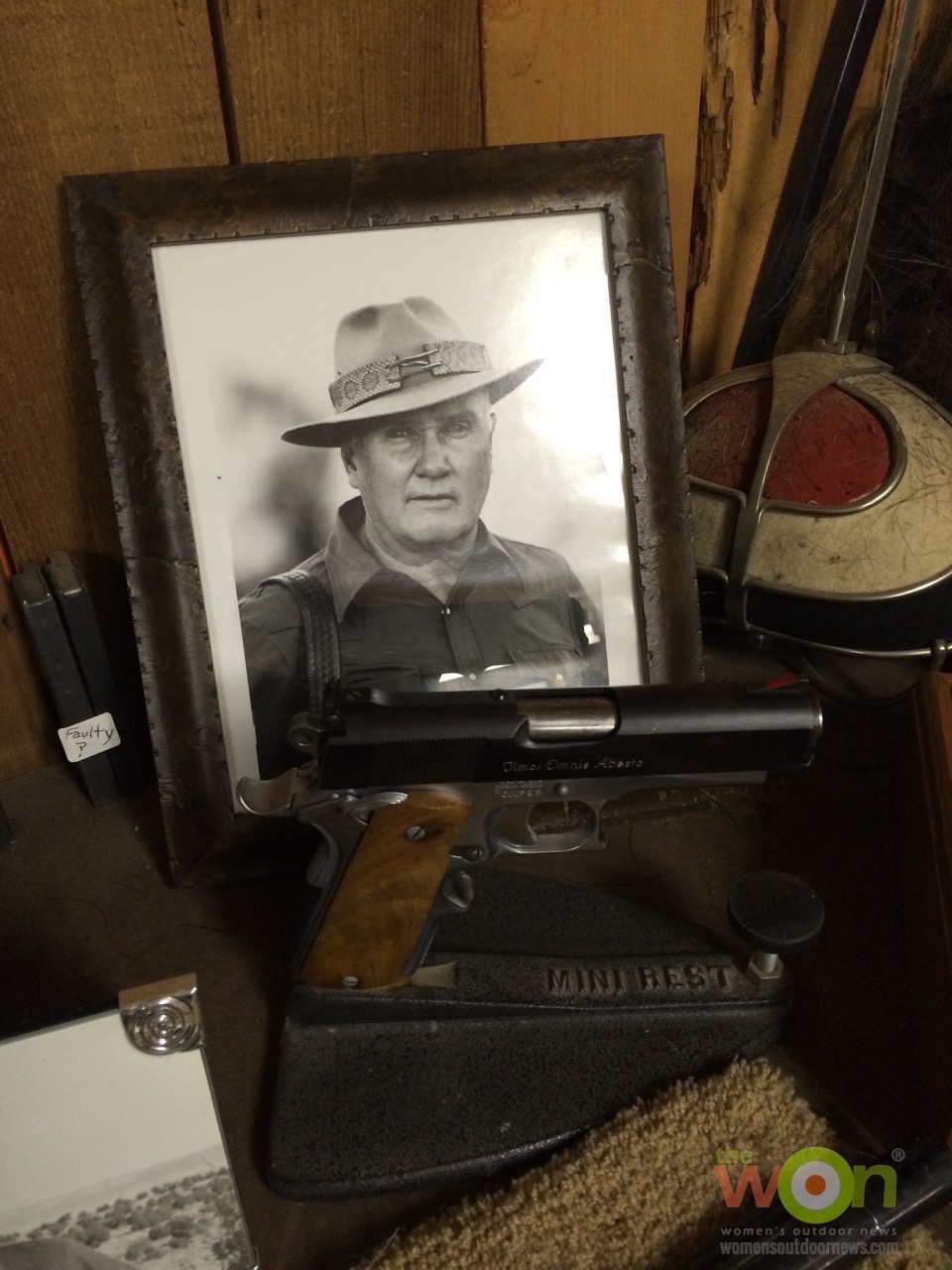 This photo was taken in Col. Cooper’s gun room and trophy room, in the lower level of The Sconce. It’s a beautiful museum of his accomplishments.

Jeff Cooper passed away in September 2006. Mrs. Cooper, being his lifelong secretary, received letters of condolence from all over the world.

Janelle Cooper: It impressed upon me, that I already knew but it never hurts to have verified, that Jeff made a big difference in so many people’s lives and he has saved so many lives. … I think he knew that what he had chosen to do was his passion: to help good people not become victims of evil. He set out to find the best methods. … He learned more from arranging shooting competitions and observing what the men brought to the scene and to what they felt would win the match.

The main thing was to give the students a peace of mind. That’s what I hear over and over again: ‘Now that I’ve learned how to handle a situation where I’m threatenedd, I don’t even have to show my gun … I have a peace of mind that tells me I’m in charge.’ That’s a big part of it. Of course, the mental conditioning that Jeff introduced into the concept of marksmanship is vital. Most people, when they describe what they learned at Gunsite, mention that part. I think that’s why it’s lasted so long. Another thing I get a lot of feedback on, is that friends that are made here.

I agree with Mrs. Cooper: friendships begin and continue because of relationships formed at Gunsite. During the interview, Lindy mentioned the value of a friendship that begins or is strengthened because of the challenges presented – physically and mentally – while training at Gunsite. I am fortunate to have been in courses there with people whom I will never forget and who continue to inspire me. And, I always know … they got my back.

Find out more about the Gunsite 250 course, in a previous article by Barbara Baird.